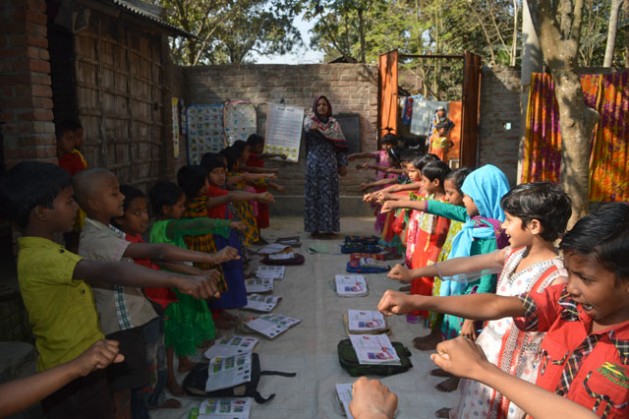 A class at an ENRICH learning centre in progress in Ranihati. Credit: Rezaul Karim/IPS

CHAIPAINAWABGANJ, Bangladesh, Mar 10 2016 (IPS) - About a year ago, seven year-old Afroza Khatun dropped out of school as her mother could not continue supervising her homework.

The interruption in her grade II lessons was soon noticed by a teacher of an information education centre known as ENRICH, a state-funded programme which aims at supporting children who drop out to continue their education from the primary level (up to grade II).

“I could not accept that Afroza, so brilliant in her lessons, had to drop out of school just because her mother could not help prepare her lessons at home,” Mosammet Shirin Akter, a teacher at ENRICH learning centre, told IPS News.

Afroza’s father died when she was still in her mother’s womb. Too poor to support the family, Afroza’s mother, Joshna, had to work as a day labourer. Recently, she found a new job of stitching fabrics at home and earns barely enough to feed her family two meals a day living in a tiny thatched home in Ghorapakhiya village of Ranihati union in Chapainawabganj district, located 320 km northwest of Bangladesh’s capital Dhaka.

A shy and highly obedient girl, Afroza, was recently enrolled for informal lessons in ENRICH in the village along with 29 other fellow students who also dropped out of regular schools. Together, they now attend ENRICH lessons to prepare for next days’ school.

“We help such children in groups in their respective neighbourhoods with their school home work. During the daily 2-hour informal lessons we also teach them singing, dancing, reciting poems, disciplines in manners and practicing general knowledge,” explained Shireen who is one of 40-odd female teachers responsible for organising such late afternoon lessons in Ranihati.

ENRICH lessons, held in home backyard six days a week, is a project of Palli Karma Sahayak Foundation or PKSF, a government agency that addresses poverty through multiple approaches, one of which is the ENRICH education programme.

Khairul Bashar of Proyas Manabik Unnayan Society, the NGO coordinating ENRICH programme in Ranihati told IPS News, “It is not so easy to get these children to return to schools and also attend information lessons. Because of poverty, parents work and they cannot take the extra burden of doing homework for their children.”

Bashar continued, “ENRICH is designed to overcome such challenges of social problems where children are often found working as day labourers to supplement their family income. When we started the programme in 2010 in 14 villages in Ranihati the dropout rate was well over 30 per cent. In 2015, no one dropped out, which means 100 per cent success.”

Bangladesh has made very commendable progress in narrowing the gender gap in dropout rates and primary education. Today, more girls than boys enrol, retain and graduate from primary schools.

According to the government’s Annual Primary School Census report 2014, the dropout rate is 20 per cent now when compared to 51 per cent in 2005.

Studies show that 98 per cent of girls enrolled in primary schools as against 97 per cent of boys in 2014. The survival rate to grade five was 81 per cent while efficiency remained at an 80 per cent level — a big improvement from 54 per cent and 60 per cent respectively in 2005.

This achievement was far from easy. Policymakers had to shift their focus from just offering free primary education to concentrating more on specific need-based quality interventions addressing poverty and its association with education.

Dr Mohammad Abu Hena Mostafa Kamal, Additional Director General, Directorate of Primary Education said, “As we progressed on net enrollment of primary school students we had noticed that the dropout rate was not declining. We soon introduced a number of attractive interventions to persuade poor parents and guardians to send their children to schools mainly in areas where poverty is a huge problem.”

For instance, the Food for Education Programme was introduced in 1993 to compensate the opportunity cost of poor parents for sending their children to school. Community and satellite schools were introduced almost the same time where there is no schools to allow children to attend lessons next to their homes.

“About 80 per cent of the state-owned primary schools now have pre-primary schools. In our more recent strategies, we introduced Reaching Out of School Children (ROSC). Studies that show this has helped increase enrolment of students in primary schools.” explained Dr Kamal.

The World Bank-funded ROSC programme was designed in 2004 as an intervention complementary to the Second Primary Education Development Programme to include never-enrolled children from remote rural areas, large numbers of dropouts from formal primary schools, working and street children as well as the children from displaced and internal migrant families.

Introduction of learning centres called Ananda Schools (schools of joy), which provide education stipends to underprivileged children to lessen the burden on their families, and distribution of free books, stationeries and school uniforms, have made huge impact in the successes of primary education.

The Ananda Schools are established in regions with high poverty and low enrolment and completion rates. These schools blend formal education with a non-formal mode of provision, and they run differently from normal primary schools.

Rajashree Paralkar, Acting Head, World Bank Bangladesh told IPS News, “Bangladesh has made remarkable progress in bringing children to school over the past two decades. Still, many school-going children miss or drop out of school due to poverty.”

There are around 19 million children in primary education attending through 108,000 institutions and out of these 64,000 are run by the government. The teacher to student ratio has also decreased to now 40:1.

Despite the achievements, however, experts express concerns about the decreasing trend in budget allocation for education from 14 per cent in 2000 to 10.2 per cent now. There are also concerns about the disabled, inaccessible children, like in the forests and hilly regions. Many schools today still lack proper sanitation and water supply.