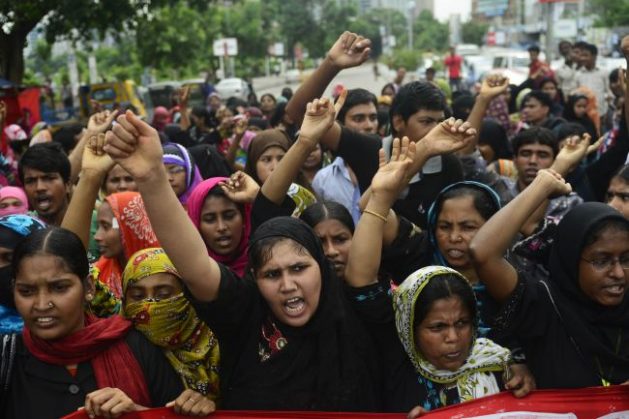 DHAKA, Feb 9 2018 (IPS) - Although Bangladesh has made remarkable recent strides like building green factories and meeting stringent safety standards, garment workers here are still paid one of the lowest minimum wages in the world.

While the fashion industry thrives in the West, the workers who form the backbone of the 28-billion-dollar annual garment industry in Bangladesh struggle to survive on wages barely above the poverty line.

According to Oxfam, a top fashion industry CEO earned in four days the lifetime pay of a factory worker.

Meanwhile, annual export earnings in Bangladesh from the industry grew from about 9.3 billion dollars in 2007 to 28.6 billion in 2016.

Encouraged by the growth, Bangladesh has set a target of exporting 50 billion dollars’ worth of apparel annually by 2021, yet the vision mentions no plans to improve workers’ living conditions.

After the tragic Rana Plaza building collapse in 2013, which took 1,134 lives, top buyers gradually increased investment in infrastructure to as much as 400 million dollars in the 2015-16 fiscal year alone to ensure safer working conditions. However, local industry owners have failed to make corresponding improvements to their workers’ quality of life, 85 percent of whom are women.

Research by the international aid group Oxfam shows that only two percent of the price of an item of clothing sold in Australia, for example, goes to pay the factory workers who made it.

The picture is even worse when it comes to living, food, transport, healthcare and education for the 4.5 million workers employed in about 4,600 vibrant factories. The Oxfam report revealed grim poverty conditions and calculated that a top fashion industry CEO earned in four days the lifetime pay of a factory worker.

There are a number of issues at play, including lack of unity among the 16 trade unions, political pressure by the industry owners, loopholes in the national labour laws and misunderstanding about practical living wages and theoretical minimum wages.

Nazma Aktar, President of the Sommilito Garment Sramik Federation fighting for women’s rights in the garment industry for over three decades, told IPS, “Most buyers have a business perspective on the ready-made garments industry here in Bangladesh. Their interests are widely on exploiting cheap labour.

“The wages should be fixed on the basis of human rights and not negotiate with what the entrepreneurs can offer. Wages are not part of a business, which is why globally it has set obligatory fees like covering cost of basics – living, food, healthcare, education and transport.” A garment worker in Bangladesh. Photo Courtesy of the Bangladesh Apparels Workers Federation

The garment  workers’ organisations are demanding Taka 16,000 (about 192 dollars) as the minimum monthly wage, citing rising costs of living. In January, the government formed a panel to initiate what it says will be a permanent wage board and promised to issue recommendations in six months. The unions also plan to seek pay grades depending on the category of worker.

Dr Khondaker Golam Moazzem, Project Director, RMG Study Project and Research Director of the Centre for Policy Dialogue (CPD), told IPS, “The disturbing low wages still paid to the RMG (Ready-Made Garments) industry workers is largely due to lack of clear definition of wages in the labour laws. As a result, it is very difficult to negotiate raise in wages for the workers.”

Moazzem, who also led a team of researchers in conducting a detailed study titled New Dynamics in Bangladesh’s Apparels Enterprises: Perspectives on Restructuring, Up-gradation and Compliance Assurance, says, “There are nine indicators of wages as defined in the labour law. Unfortunately, except two, the rest are not made public. So it seems that the laws are themselves very complex and misleading on how to define what is low and what is high income. In such a situation we suggest following International Labour Organisation’s (ILO) set definition of wages.”

Dr Nazneen Ahmed, a senior research fellow of Bangladesh Institute of Development Studies (BIDS), told IPS, “Wages in Bangladesh are still the lowest of major garment manufacturing countries. A large proportion of the RMG products of Bangladesh still can be categorized as low-end products and so the brands continue seeking low-cost labour, though they are unskilled.”

Ahmed, who carried out a detailed study on improving wages and working conditions in the Bangladeshi garment sector, explained that while a higher wage for workers is desirable, they would lead to gradual loss of the RMG market in the days of global competition. A sudden increase in wages would also trigger other industries to seek wage hikes.

“I suggest a separate pay scale for the RMG sector workers which would have a separate wage board to suggest the increases. But most effective would be to have a regular system of yearly wage increases according to rate of inflation. At the same time, we should also look at increasing production of the factory units by enhancing the skills of the workers who will be paid higher wages.

“Therefore I refer to as having a technology advancement plan. If the ‘skilled’ workers are capacitated through regular skill development training programmes, the entrepreneurs would then be able to make more profit and so in such situation I believe the industry owners would not hesitate to pay a higher salary.”

Towhidur Rahman, General Secretary of the IndustriALL Global Union, Bangladesh Chapter (IBC), told IPS, “The minimum wages fixed for any worker at entry level is absolutely unacceptable. I don’t blame the [industry] owners for this. I rather hold the union leaders responsible for their lack of unity and one voice for this situation. The demand for minimum wages should be realistic for survival of any human being.”

Rahman says, “Sadly, today we have 16 RMG workers’ organizations that have separate voices and ideologies. For such reason the entrepreneurs take advantages of lack of understanding among the workers representatives.”

Rahman explains that they proposed Tk 16,000 as minimum wage to the newly formed wage board based on a number of surveys which suggest that a worker requires a minimum of Tk 19,000 for food, shelter, transport, healthcare and other basic needs.

“I believe this is very practical and fair proposal as it is merited with evidence on a minimum living standard,” says Rahman.

Dr Zahid Hussain, a lead economist in the South Asia Finance and Poverty group of the World Bank, told IPS, “Most people naturally focus on wages as a cost of production for business.  The significance of wages as a cost is one component of what economists call ‘real unit labour cost”’. This is the cost of employing a person in terms of the value of the goods and services a business would produce. It depends on two things. The first is the real wage – the purchasing power of the worker’s pay packet, which brings into play prices of goods and services.

“What governs investment? A simple answer points to the expected rate of return on the investment relative to the cost of capital. So the bottom line is the following:  just increasing minimum wage without addressing the constraints on investment and its financing will most likely kill the goose that lays the golden eggs.  The whole issue of ensuring a better quality of life for the workers needs to be approached holistically such that productivity increases in tandem with wages.”

Siddiqur Rahman, President of Bangladesh Garment Manufacturers and Exporters Association (BGMEA), told IPS that the industry has been offering minimum wages to factory workers considering inflation and efficiency of the workers.

“We do not do any injustice to any of our workers,” Rahman insisted.