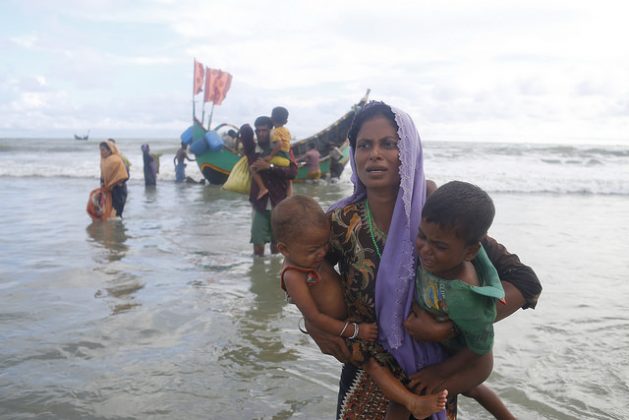 DHAKA, Mar 2 2018 (IPS) - Nobel Laureates Mairead Maguire, Shirin Ebadi and Tawakkol Karman met with more than 100 women refugees in camps in the coastal Cox’s Bazar region of Bangladesh this week, as well as travelling to the “no man’s land” where thousands of Rohingya have been stranded between Myanmar and Bangladesh.

Maguire is a co-founder of Peace People, a movement committed to building a just and peaceful society in Northern Ireland. She and Betty Williams won the Nobel Peace Prize in 1976. She is well known for her work with victims of conflict around the world.

Shirin Ebadi is an Iranian lawyer, former judge and human rights activist and founder of the Defenders of Human Rights Center in Iran. Ebadi was awarded the Nobel Peace Prize in 2003 for her pioneering efforts for democracy and human rights, especially women’s, children’s, and refugee rights. 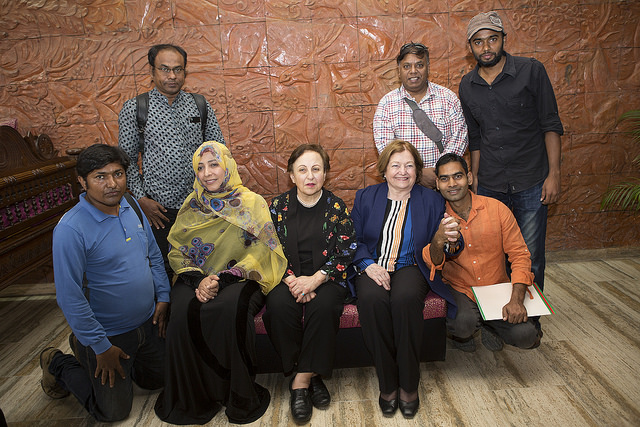 Following are excerpts from the exclusive interviews.

IPS: You have called for trials of the Myanmar leaders in the International Criminal Court (ICC) for committing alleged genocide. How do you intend to seek justice when the world seems to be so divided over the Rohingya issue?

Mairead Maguire: “The leaders in Myanmar have committed genocide and we have all the witnesses for that. We heard women [speak of] being tortured, raped and their homes being burnt.”

Maguire related the story of a woman who was raped repeatedly and left for dead.

“The unconscious woman was later picked up by an elderly woman who took her to safety. That story of that woman being raped can be multiplied many times and you can well imagine the situation. So obviously we can understand that this is a policy of the Myanmar government to terrorize and expel the Rohingya people. They don’t even recognize them as their citizens. So the international community must take steps to do something. And we must take the Myanmar government to the ICC.

“A lot of people are working on this, like international lawyers, and we will continue until this is fulfilled. The second thing that we want to do is that Aung San Suu Kyi is our sister laureate. We believe that as long as she remains silent about what the Myanmar government is doing she is complacent with the genocide. But we want to go and see Aung San Suu Kyi and we want to ask her to break her silence.”

Maguire explained that she and her colleagues wish to speak to envoys of as many countries as possible.

“We would continue to pursue this dialogue with the ambassadors and leaders of the governments. We would also contact the United Nations and the European Parliament until this is taken to the international court.

IPS: What is your opinion on the voices of the global community, especially the influential leaders, remaining silent to a large extent on the Rohingya issue?

“I think many governments have interests in Myanmar, especially economic. In Rakhine state there are lot of resources like diamonds and costly stones. It’s all about money and oil. China also has interests in Maynmar because of these reasons. Unfortunately, many governments put profits before people. It should be other way around – governments should be responsible for taking care of their people. But they don’t want to say anything on human rights and justice because of political interests. However, we have to say as leaders, as Nobel Laureates, people are important, every person is important and it is wrong because of economic and political ties to allow people to be destroyed like this. We have to speak out and move the world’s conscience. 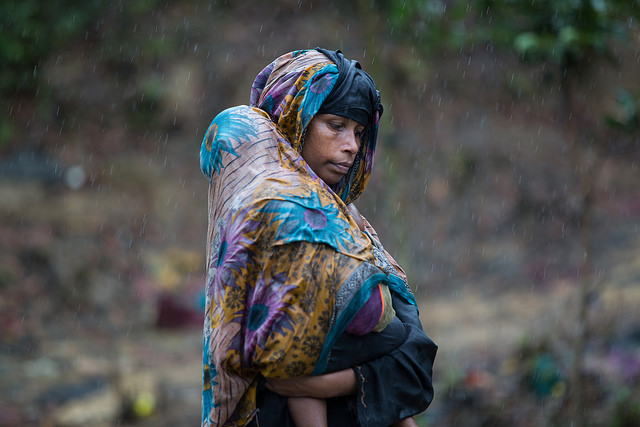 IPS: Do you believe that the United Nations has played its due role?

“No, the UN has not done enough. Human beings have a right to life, right to security and the governments must defend those rights of their people. And we have seen what the Myanmar government has done. I was there as part of a Nobel delegation 18 years ago on the Thai border with Myanmar and witnessed Karen people living in refugee camps who had to flee Burma. I had met many women then who were raped and carrying children of Burmese soldiers. So what we have seen in Cox’s Bazar [Rohingyas] the situation is not new. The Burmese military has been doing this for a long, long time.”

IPS: How can media coverage help bring justice to the victims?

“Women told us their stories of children being beaten, women being raped and their husbands being killed and houses burnt, which were absolutely horrific. The surviving women wanted us to tell their stories to the world so that their sufferings are known and they can then seek justice. They can have their national identity and go back to where they belong. So IPS can tell the real stories because when people hear these stories they cannot ignore them. We need the media like you. Because people don’t believe. It is diabolical what the Burmese soldiers have done to the Rohingya people, thinking nobody will know – but when you bring the truth to the light of day they cannot continue like this.”

Asked about the role of Bangladesh in welcoming the Rohingya refugees, she said, “It’s a wonderful example to other countries who have refugees on their borders. You have opened doors for a million or more and Europe is closing their doors. It is indeed a contrasting situation. When we went to the camps I was so astonished to see how well-organised they were. It’s wonderful to see how the government and the NGOs were working together.”

IPS: How can Myanmar be brought before the ICC?

Shirin Ebadi: Unfortunately, Myanmar is not a signatory to the Rome Statute [convention] for the ICC. So the only way this can happen is for the United Nations Security Council (UNSC) to decide to send the case of Myanmar to the ICC as they did in the case of Sudan.

What has happened to the Rohingya people is indeed a crime of genocide. In fact, the United Nations, the United States, the European Union has all acknowledged that it is genocide. That is why I am very much hopeful that the UNSC will debate this case but my only concern is China as a member of the UNSC may use its right to veto because of its economic interests in Myanmar.”

Ebadi also called on the wealthy Muslim countries, such as Iran, Saudi Arabia, Qatar and Kuwait, to do more for the Muslim-minority Rohingya.

“They are not giving any assistance, or they are giving very little. They prefer to spend their money on buying weapons which they use for killing people. So, my message to them is come and see the plight of the fellow Muslims and how they are being treated and my message is also to the Islamic countries – shame on you for not helping.”

What message would you give to your fellow Nobel Laureate Aung San Suu Kyi? And do you also hold her responsible for the situation?

“I am indeed very sorry Aung San Suu Kyi, a person whom I had campaigned for on many occasions when she was under house arrest to secure her release, has now become complacent in the crime against the Rohingyas. My message to Aung San Suu Kyi is you have to break your silence now. You have to stop the genocide otherwise you would be held responsible and you must answer for your crimes at the international criminal court.”

The Nobel Women’s Initiative, in partnership with the local Bangladeshi women’s organization, Naripokkho, hosted the delegation of the Nobel Laureates to Bangladesh to witness and highlight the situation of the Rohingya refugees and the violence against Rohingya women.

Tawakkol Karman was known as “The Mother of the Revolution” and was awarded the Nobel Peace Prize in 2011 in recognition of her work in nonviolent struggle for the safety of women and for women’s rights to full participation in peacebuilding work in Yemen.