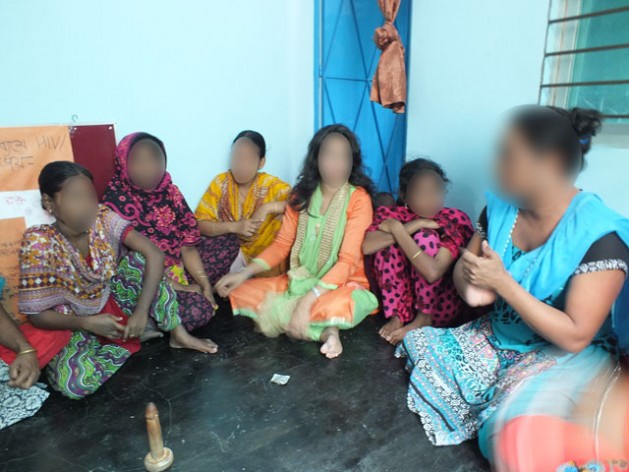 Despite working long hours in the night, she and her fellow colleagues chose to attend a meeting in the afternoon because the education programme on prevention of HIV/AIDS meant a lot to them.

“As a sex worker, I am very vulnerable to transmitting the HIV virus. I have no idea if my ‘clients’ are safe from it but I definitely wish to be free of all such deadly viruses,” said Radhika, a separated wife and mother of two school-going daughters.

She depressingly added: “I wish my daughters never find out about my profession but more importantly I have to survive to give my children the best possible life I can.”

Radhika’s interest in this advocacy programme is not because she wants to live a decent life but she also desires a safer life for others.

Fellow CSW Jhuma Akter, in her mid-teens, similarly elaborated that “My bread and butter come from a profession which is hated by society and I know I cannot change this. However, I certainly wish to practice safe sex to keep my ‘clients’ safer.”

Such an understanding on safe sex practices to prevent HIV/AIDS and sexually transmitted infections (STIs) among hotel, street and residence-based female sex workers did not come about overnight.

Shova Rani, a female transgender and leader of Badhan Hijra Sangha, said, “There was a time when most CSWs were ignorant about such technical issues of HIV transmission. Now that we have a database of such vulnerable groups, awareness has increased.”

Nargis Akhter Lipy, coordinator of the HIV/AIDS programme called strengthening health and other opportunities for vulnerable adolescents (SHOVA), executed by a leading NGO, Young Power in Social Action told IPS News, “There has been a tremendous increase in awareness among CSWs that we work with. More and more of them show enthusiasm in the HIV education programme, which is evident from mounting weekly attendance.”

SHOVA has been giving life skill training for the vulnerable group of people in addressing HIV-prevention among the most at-risk populations (MARP). It is a part of the nation-wide network system in awareness.

Like SHOVA, there are hundreds of similar HIV/AIDS prevention programmes undertaken by non-government organisations or NGOs that execute such education programmes with MARP.

It is this network of key players (NGOs) that took up the challenge of awareness programmes in HIV/AIDS prevention. The early interventions by the government and their partners are considered a strategic turning point in the continued success of low HIV prevalence rates despite the vulnerabilities.

Experts agree on the strategy but concerns still remain to be addressed.

Dr Ubaidur Rob, country director of Population Council, which has significant contributions in HIV prevention research, told IPS News: “early campaigns for HIV prevention made huge impacts but my concern is the epidemic of HIV transmission among injecting drug users (IDUs) – about 5 per cent.”

Dr Rob, worried by the rising infection rates among the IDUs, said, “HIV often spreads most rapidly among IDUs and is then transmitted through their sexual partner networks to the general population.”

Dr Halida Khandaker, executive director of Confidential Approach to AIDS Prevention echoed similar concerns to IPS News saying, “the HIV prevalence rate in general population is below 1 per cent. But in some MARP groups the infection rate is very high (5 per cent in IDUs) and in one area close to neighboring countries with high prevalence, the HIV infection rate is high (2.7 per cent among sex workers). What about their partners, spouses and clients?”

Dr Halida continued, “There is every possibility that they can carry the infection and give it to their partners. To trace them and to test them is difficult. If the religious practice of men`s circumcision plays some role to keep the prevalence of HIV low, then why there is high sexually transmitted disease? Low prevalence or low detection is a dilemma and shall remain a dilemma until it turns into an epidemic.”

The success story of maintaining low HIV prevalence rates still enjoyed today in Bangladesh is one of addressing focussed challenges.

Bangladesh initiated an early response to the HIV epidemic starting in 1985 when the first national strategy was launched to confront threat of infection. This occurred when many countries with high risk behaviour at that time did not even have national responses. Bangladesh, however, was preparing to combat HIV infection just about after five years of the first HIV case detected in the world. The National AIDS Committee was formed in 1985, four years before the first case of HIV detected in the country.

To keep track of HIV transmission the International Centre for Diarrhoeal Disease, Bangladesh (icddr,b), a leading health research organisation, has been conducting sero-surveillance or blood tests among the MARPs since 1998.

Results from the last such nation-wide survey indicate that Bangladesh is on the right track. Less than 1 per cent HIV prevalence among the MARPs and more encouraging is the fact that HIV transmission among the IDUs declined from 7 per cent in early 2000 to 5.3 per cent in 2011.

Dr Tasnim Azim, director, Programme for HIV at icddr,b, who was one of the principal investigators of the surveillance, told IPS News, “We feel the main reason why the prevalence has remained low (less than 1per cent) is because of the early interventions for HIV prevention which started much before HIV was detected in any key at risk population group.”

While the results are encouraging, experts point to more practical and serious issues.

The nation has a porous border with India which has some of the highest concentrations of people living with HIV/AIDS (PLWHA) in north east of Bangladesh.

On top of this, risky behaviour, international migration of mostly youths, low literacy rates and condom use, high STIs, poor healthcare services for the PLWHAs all indicate that Bangladesh is sitting on a HIV time bomb waiting to explode.

According to the national AIDS/STD programme, there are 3,241 HIV positive cases in the country in contrast to over 9,000 as estimated by UNAIDS. Among HIV positive persons, 1,299 developed AIDS.

Dr Labiba Shafinaz, medical officer of a leading NGO – Mukto Akash Bangladesh — told IPS News, “The biggest challenges are addressing social stigma, breach of confidentiality and rejection. We still live in a society that highly discriminates HIV carriers. One of my ‘clients’ once told me that being HIV positive is like getting a death sentence.”

Medical care for PLWHAs is by and large confined to a few medical centres run by NGOs, voluntary counseling and testing for HIV is also far too low because of discrimination and breach of confidentiality.

Experts believe that if interventions are not enhanced further, Bangladesh, having a population of 160 million, is likely to start with an IDU-driven epidemic, similar to other neighbouring countries, which will then move to other population groups, including sex workers, males who have sex with males, clients of sex workers, and ultimately their families.