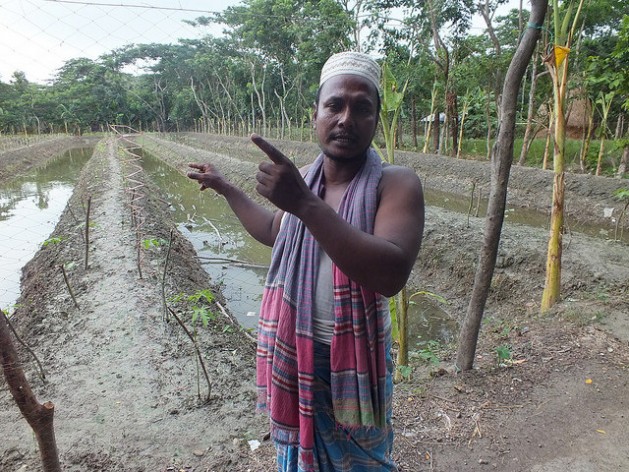 Bangladeshi farmer Aktar Hossain using the Sarjan model. He just planted eggplant (known locally as brinjal) worth 700 dollars and released fish worth 240 dollars. Hossain expects a profit of 1,200 dollars by the end of the season. Credit: Naimul Haq/IPS

BHOLA, Bangladesh, Jun 22 2016 (IPS) - A continuous influx of sea water is threatening agriculture and food security in vast coastal areas of Bangladesh, but farmers are finding ways to adapt, like cultivating fish and crops at the same time.

The coastal and offshore areas of this low-lying, densely populated country include tidal estuaries and river floodplains in the south along the Bay of Bengal. Here the arable land is about 30 percent of the total available in the country.

In a recent study, experts observed that salinity intrusion due to reduction of freshwater flow from upstream, salinization of groundwater and fluctuation of soil salinity are major concerns and could seriously hamper country’s food production.

According to salinity survey findings, salinity monitoring information, and interpretation of Land and Soil Resource Utilization Guides, about one million hectares, or about 70 percent of cultivated lands of the southern coastal areas of Bangladesh, are affected by various degrees of soil salinity.

It is already predicted that if the current trend of climate change continues, rice production could fall by 10 percent and wheat by 30 percent.

Dr. Mohiuddin Chowdhury, principal scientific officer of Bangladesh Agriculture Research Institute or BARI, told IPS, “We are indeed greatly concerned by the loss of arable land in the coastal areas that is already happening and the future from the past trends looks bleak.”

Dr. Chowdhury explained that salinity in the coastal regions has a direct relation with temperature. If the temperature rises, the soil loses moisture and the salt from tidal or storm surges becomes concentrated, which results in crops wilting or dying – a phenomenon that is is already widely evident.

Dr. Chowdhury stressed adaptation measures and crop management, since at this point, climate change “cannot be avoided, but we have to live with it.”

Salinity in Bangladesh, one of the countries worst affected by decades of sea level rise, causes an unfavorable environment that restricts normal crop production throughout the year. The freshly deposited alluviums from upstream in the coastal areas of Bangladesh become saline as it comes in contact with the sea water and continues to be inundated during high tides and ingress of sea water through creeks.

To confront the challenges, farming communities in the coastal areas that always relied on traditional agricultural practices are now shifting to research-based farming technology that promises better and safer food production.

The chief of BARI, Dr. Mohammad Rafiqul Islam Mondal, who describes climate change as a tragedy, told IPS, “At BARI, we are concentrating on developing agriculture practices towards adaptation to the extreme weathers, particularly in the coastal regions.”

Recognizing the adaptation strategies, BARI, blessed with years of research, has successfully introduced best farming practices in coastal regions. One is called the Sarjan model and is now very popular.

A leading NGO in Bangladesh, the Coastal Association for Social Transformation Trust (COAST), which has over 35 years of experience working mostly in coastal areas, has played a key role in supporting farmers with adaptive measures.

During a recent visit to an island district of Bhola, this correspondent witnessed how COAST in collaboration with the local agriculture department has introduced the farming model that is making huge positive impacts.

The Coastal Integrated Technology Extension Programme (CITEP) being implemented by COAST in Char Fasson has been helping farmers since 2003 with alternative farming practices to improve crop production in the face of climate change.

As part of its capacity-building programmes, CITEP encourages farmers to use the Sarjan model of long raised rows of soil about one metre wide and 90 cm high for cultivating varieties of vegetables. The trenches between the rows are filled with water into which various types of fish are released for maturing. The water for irrigating the plants comes from nearby lakes filled with freshwater drawn from the Meghna River.

The advantage of using Sarjan model is that it protects cropland from inundation during storm surges, tidal waves and flash flooding and avoids high salinity.

CITEP project coordinator in Char Fasson, Mizanur Rahman, told IPS, “These lowlands, hardly 25 kms from the sea at the confluence of the Bay of Bengal, are prone to tidal waves and storm surges during the seasons. So the recent farming models introduced here have been designed to protect the crops.”

According to Sadek Hossain, a veteran farmer who is already benefitting from the Sarjan model, said it “is safer and gives risk-free crops as the spaces between the crops allow more sunlight exposure and also has far less pest attacks.”

The new farming practice has turned out to be very popular in Char Fasson, where over 9,000 farmers are now using the model. Many farmers have also formed self-help groups where members benefit from sharing each others’ experiences.

Manzurul Islam, a local official of the government’s agriculture department in Char Fasson, told IPS, “At the beginning, the challenges were huge because farmers refused to adapt to the new model. Realising the benefits farmers are now convinced.”

Losses of crops on flat lands are disastrous. Mohammad Joynal recalls how tidal waves three years ago destroyed huge crops. “We were helpless when the crops were inundated on about 5,500 hectares of flat land. The sea water inundation for four months caused all crops to wilt and eventually rot,” said a dishearten face of Joynal.

Hundreds of farmers have been trained using demonstration crop fields on the adaptation techniques. “We have many different models developed to grow crops at different levels of salinity which are already proven successes,” said BARI Director General Dr. Mondol.

The Climate Change Vulnerability Index (CCVI) for 2014, which evaluated the sensitivity of populations, the physical exposure of countries, and governmental capacity to adapt to climate change over the following 30 years, ranks Bangladesh as the number one economy in the world at risk to climate change.

Globally, emissions of carbon dioxide and chlorofluorocarbons into the atmosphere are growing at a rate of 5 percent annually, according to a joint publication by COAST and the Equity and Justice Working Group (EJWG) on ‘Climate Change Impact and Disaster Vulnerabilities in the Coastal Areas of Bangladesh’.

Rezaul Karim Chowdhury, executive director of COAST Trust and one of the authors of the joint publication, told IPS, “The impacts of climate change with time would become more acute hitting right at the core of our economy – agriculture on which over 70 percent of our rural population rely on.”

Rezaul, well known for his contributions to development in the coastal regions, added, “We acted early considering the harsh realities of extreme weathers. Introducing the Sarjan model is one of many which we have successfully implemented, building capacities of the local farmers.”