RAMALLAH, Feb 22 2012 (IPS) - Nisreen Awwad moves closer to the microphone as she signs off to her listeners, the words “Nisaa FM: music, change, success” displayed prominently over her left shoulder. 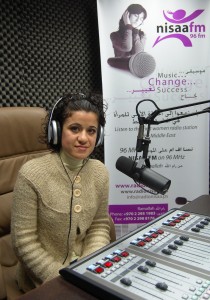 “The thing I love (most) in my programme is when I interview simple women from the villages, because they are successful and (are doing) something different in their society,” the 31-year-old radio producer, a native of the Qalandiya refugee camp in the occupied West Bank, tells IPS.

Host of the daily morning show on Nisaa (Women in Arabic) FM, Awwad explains that positively influencing the roles women play in Palestinian society, and changing the way Palestinian women view themselves, is what she strives for.

“I got involved here because I believe in the message of the radio station, and I wanted to make (a difference for) women in our society. Nisaa FM, I think, it’s something different,” Awwad said. “I like how my work in Nisaa FM makes me involved more in women’s issues.”

Launched in June 2010, Nisaa FM is an almost entirely female-run Palestinian radio station based in Ramallah, West Bank and the only radio station in the Middle East devoted solely to women’s issues. Its director Maysoun Odeh Gangat says that the station aims to inform, inspire and empower local women.

“Through the positive role that the women are playing in the society that we portray, we believe that we can empower women economically and then socially and politically. It could be any woman from the rural areas or the refugee camp, or a woman parliamentarian or minister,” Gangat told IPS.

In addition to suffering from a myriad of human rights abuses stemming from Israel’s occupation of the West Bank and siege of Gaza, Palestinian women face challenges from within their own society.

According to a 2009 report released by the Palestinian Women’s Information and Media Centre (PWIC) in Gaza, 77 percent of the women in Gaza had experienced some form of violence; 53 percent had been exposed to physical violence and 15 percent to sexual abuse.

In 2008, the Ramallah-based Arab World for Research and Development (AWRD) research centre found that 74 percent of survey respondents did not know of any organisation working on women’s rights. Some 77 percent of respondents also said that they supported enacting laws to protect women from domestic violence.

“This is a patriarchal society. This is a male-dominated society, so the change should come by addressing males, as well,” Gangat said, explaining that engaging Palestinian men on women’s issues is important to the station.

She added that talking about difficult issues – such as polygamy, divorce, abuse, early marriage, and poverty – and the ways in which women can assert their rights in these areas, is necessary for change to occur.

“Women were inspired by the fact that we bring some people or experts on issues that are contentious and negative. We’ve had some women calling and asking us, ‘Which organisation did you interview?’” Gangat said.

With hundreds of permanent and flying Israeli checkpoints throughout the West Bank, and with the Gaza Strip almost entirely sealed off, Palestinians are forced to deal with restrictions on their freedom of movement every day.

This difficult reality, combined with social and economic limitations within Palestinian society itself, makes radio stations like Nisaa that much more important, Gangat said.

“Radio can be accessible to all women in remote areas and it’s a very cheap and simple medium. I believe when women talk about their experiences in the Gaza Strip, they can pass it on to the women sitting in the West Bank, and vice versa,” she explained.

“Nisaa FM connects them together. Through the airwaves, we connect them together and they have a voice, a platform, which they can share and they can talk about their experiences.”

Today, the station’s impact is starting to be felt on the ground.

“(We) have been receiving hundreds of calls from workers who ask for clarifications about their rights after hearing the discussion on the radio,” wrote U’nwan Al-A’amel (“The Worker’s Address”), a Jenin-based organisation that protects Palestinian workers’ rights, in a press release.

“This only shows the great efficiency of media, and the speed and ease it offers in delivering information to a targeted group,” said the press release published in the Al Quds newspaper earlier this month.

“The working women in the agricultural branch in the Jordan Valley have also started to organise in groups and create committees that care to defend their usurped rights,” the group’s statement continued.

Presently, Nisaa broadcasts online and can be heard on the radio in the northern West Bank, Ramallah and Bethlehem. Finding a frequency to reach Hebron, the rest of the southern West Bank and the Gaza Strip, is the station’s next priority.

“Every day I interview unique and successful women. (In) the feedback, we always hear something nice, something different. We always hear, ‘Oh my God. You talk about these women… where (did) you find them?’” Awwad told IPS.

“Most of the time (women) are strong, (and) they can make the change. That’s what I hope.”