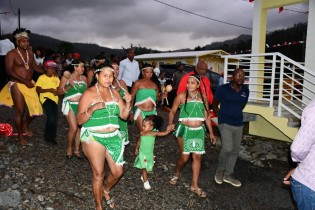 By Alison Kentish
The picturesque Mahuat River in Dominica is one of 8 communities that make up the Kalinago Territory – a 3,700-acre area on the Caribbean island’s east coast that is home to the Kalinago people, the largest indigenous group in the Eastern Caribbean. It is where 19-year-old Whitney Melinard calls home. Melinard is among a rising group of Dominica’s Kalinago youth, using their voices and platforms to speak out on issues affecting their people.

By Milagros Salazar
Peru will debut a new mechanism for prior consultation with indigenous peoples by seeking their approval for a new stage of oil drilling operations in the infamous Lot 1AB in the northeastern Amazon region of Loreto.

By Humberto Márquez
Up to 80 Yanomami men, women and children in a remote community in the Amazon jungle in southern Venezuela were reportedly killed in early July by wildcat gold miners from Brazil, according to indigenous organisations.

By Stephen Leahy
Indigenous leaders from all over South America are making their way by foot, canoe and eventually on buses to be part of the Kari-Oca Caravan to Rio de Janeiro, to talk to world leaders at the United Nations Conference on Sustainable Development, Rio+20.

By Danilo Valladares
"Midwives in Guatemala attend to women during pregnancy, the birth and the post-partum period. They give the women warmth and support, because they speak the same language and belong to the same culture," said Silvia Xinico with the Network of Organisations of Indigenous Women for Reproductive Health.

By Milagros Salazar
A unique response to the challenge of global warming is happening in rural areas of Peru, where a network of indigenous elders is working out how to adjust weather forecasts in the light of climate change, while taking measures to safeguard their crops.
ADVERTISEMENT ADVERTISEMENT