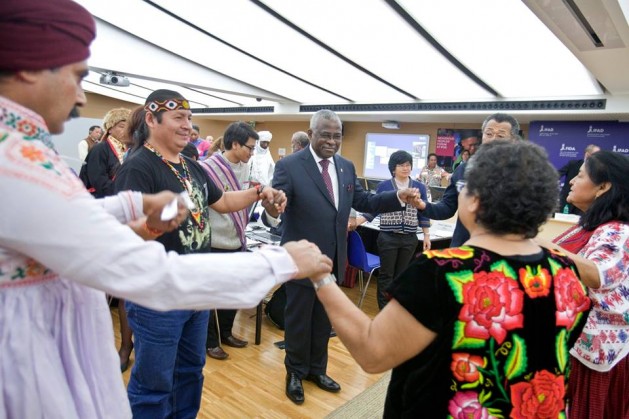 ROME, Feb 17 2015 (IPS) - “We do not inherit the Earth from our ancestors, we borrow it from our children” – an ancient Indian saying that encapsulates the essence of sustainability as seen by the world’s indigenous people.

With their deep and locally-rooted knowledge of the natural world, indigenous peoples have much to share with the rest of the world about how to live, work and cultivate in a sustainable manner that does not jeopardise future generations.

This was the main message brought to the second Global Meeting of the Indigenous Peoples’ Forum, organised by the International Fund for Agricultural Development (IFAD) last week in Rome.

“We have learned the relevance of the diversity and distinctiveness of peoples and rural communities and of valuing and building on their cultural identity as an asset and economic potential. The ancient voice of the natives can be the solution to many crises” – Antonella Cordone, IFAD

The Indigenous Peoples’ Forum represents a unique initiative within the U.N. system. It is a concrete expression of IFAD’s recognition of the role that indigenous peoples play in economic and social development through traditional sustainable practices and provides IFAD with an institutional mechanism for monitoring and evaluating the effectiveness of the agency’s engagement with indigenous peoples.

This engagement includes achievement of the objectives of the U.N. Declaration on the Rights of the Indigenous Peoples (UNDRIP).

Despite major improvements in recent decades, indigenous and tribal peoples – as well as ethnic minorities – continue to be among the poorest and most marginalised people in the world.

There are over 370 million indigenous peoples in some 70 countries worldwide, with the majority living in Asia. They account for an estimated five percent of the world’s population, with 15 percent of these peoples living in poverty.  Various recent studies show that the poverty gap between indigenous peoples and other rural populations is increasing in some parts of the world.

“IFAD is making all efforts to ensure that the indigenous peoples’ voice is being heard, rights are respected and well-being is improving at the global level,” said Antonella Cordone, IFAD’s Senior Technical Specialist for Indigenous peoples and Tribal Issues.

“We have learned the relevance of the diversity and distinctiveness of peoples and rural communities and of valuing and building on their cultural identity as an asset and economic potential,” she continued. “The ancient voice of the natives can be the solution to many crises.”

As guardians of the world’s natural resources and vehicles of traditions over the years, indigenous peoples developed a holistic approach to sustainable development and, as the U.N. Special Rapporteur on the Rights of Indigenous Peoples, Victoria Tauli-Corpuz, highlighted during an Asia-Pacific working group session, “indigenous peoples’ livelihoods are closely interlinked with cultural heritage and identities, spirituality and governance systems.”

These livelihoods have traditionally been based on handing down lands and territories to new generations without exploiting them for maximum profit. Today, these livelihoods are threatened by climate change and third party exploitation, among others.

Climate change, to which indigenous peoples are particularly vulnerable, is posing a dramatic threat through melting glaciers, advancing desertification, floods and hurricanes in coastal areas.

Long-standing pressure from logging, mining and advancing agricultural frontiers have intensified the exploitation of new energy sources, construction of roads and other infrastructures, such as dams, and have raised concerns about large-scale acquisition of land for commercial or industrial purposes, commonly known as land grabbing.

In this context, the Forum stressed the need for the free, prior and informed consent (FPIC) of indigenous peoples whenever development projects affect their access to land and resources, a requirement which IFAD President Kanayo F. Nwanzwe said should be respected by any organisation engaging with indigenous peoples.

Poverty and loss of territories and resources by indigenous peoples due to policies or regulations adverse to traditional land use practices are compounded by frequent discrimination in labour markets, where segmentation, poor regulatory frameworks and cultural and linguistic obstacles allow very few indigenous peoples to access quality jobs and social and health services.

These are among the issues that participants at the Forum said should be taken into account in the post-2015 development agenda. They said that this agenda should be designed to encourage governments and other actors to facilitate the economic and social empowerment of poor rural people, in particular, marginalized rural groups, such as women, children and indigenous peoples.

A starting point for the architecture of the agenda for the Sustainable Development Goals (SDGs) which will replace the Millennium Development Goals (MDGs) that expire at the end of this year was seen as the recommendations adopted during the two-day Forum (Feb. 12-13).

These included the need for a holistic approach to supporting and strengthening indigenous peoples’ food systems, recognition of traditional tenure, conservation of biodiversity,  respect for and revitalisation of cultural and spiritual values, and ensuring that projects be designed with the FPIC of indigenous peoples.

Participants said that it is important to emphasise the increasing need to strengthen the participation and inclusion of indigenous peoples in discussions at the political and operational level, because targets in at these levels can have a catalytic effect on their social and economic empowerment.

The Forum agreed that giving the voice to indigenous people and their concerns and priorities in the post-2015 agenda represents an invaluable window of opportunity for development.