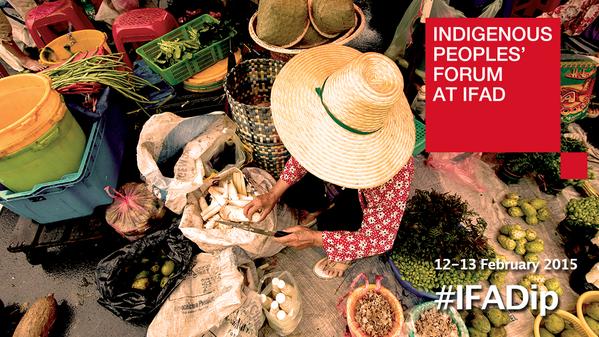 Food security and a balanced diet for all must be combined with the knowledge of indigenous peoples’ food systems and livelihoods as a contribution to sustainable development. Credit: IFAD

ROME, Feb 23 2015 (IPS) - Overcoming hunger and malnutrition in the 21st century no longer means simply increasing the quantity of available food but also the quality.

Unfortunately, the debate over how to address this challenge has polarised, pitting agriculture and global commerce against local food systems and traditional ecological knowledge, land-based ways of life and a holistic, interdependent relationship between people and the Earth.

“Arrogantly and insolently, humanity has cultivated the idea of development and progress based on the belief that the planet’s resources are infinite and that human domination of nature is limitless” – Carlo Petrini, founder of the International Slow Food Movement

Organised to reflect on this, among other issues, the second Global Meeting of the Indigenous Peoples’ Forum, held at the International Fund for Agricultural Development (IFAD) from Feb. 12-13 in Rome, discussed solutions that combine the need to ensure food security and a balanced diet for all with the knowledge of indigenous peoples’ food systems and livelihoods as a contribution to sustainable development.

According to IFAD President Kanayo F. Nwanze, “indigenous peoples’ lands are some of the most biologically and ecologically diverse places on earth … It is only now, in the 21st century, that the rest of the world is starting to value the biodiversity that is a core value of indigenous societies.” Occupying nearly 20 percent of the Earth’s land area, indigenous groups act as custodians of biodiversity.

Participants at the Forum debated the potential of indigenous livelihood systems and practices – thanks to an age-old tradition of inter-generational knowledge transmission – to contribute to and inspire new transformative approaches of sustainable development, synthesising culture and identity, firmly anchored in respect for individual and collective rights.

However, the Forum described how many indigenous communities and ecosystems are at risk due to the lack of recognition of their rights and fair treatment by governments and corporations, population growth, climate change, migration and conflict. According to participants, the on-going exclusion of indigenous people devalues not only the importance of their communities but also the traditional ecological and agricultural knowledge they possess.

“Arrogantly and insolently, humanity has cultivated the idea of development and progress based on the belief that the planet’s resources are infinite and that human domination of nature is limitless,” Carlo Petrini, founder of the International Slow Food Movement, said at a Forum side event focused on the interconnections among nutrition, food security and sustainable development.

“The march towards this idea of progress has left women, youth and elderly people and indigenous populations at the end of the line with no one left to give a voice to them,” he continued. “All the drama of modern reality is now revealing itself: the ‘glorious march’ of progress is now on the edge of a precipice, the present crisis the fruit of greed and ignorance.”

Largely addressing the so-called developed world, the Forum described how many of the good practices and traditional empirical wisdom of indigenous peoples deserve to be studied with care and attention. For example, boosting local economies and agriculture, along with respect for small communities, are ways of reconciling man with the earth and nature.

At the same time, many indigenous communities have certain foods – including corn, taro and wild rice – that are considered sacred and are cultivated through sustainable land and water practices.  This contrasts with the global production, distribution and consumption of food which pays little attention to loss of water and soil fertility, genetic plant and animal erosion and unprecedented food waste.

The Forum also heard how issues related to the paramount role of indigenous peoples’ food systems are central to the Food and Agriculture Organization (FAO) projects managed by the Center for Indigenous Peoples’ Nutrition and Environment (CINE) at Montreal’s McGill University in Canada.

“Years of work have documented the traditional food systems of indigenous peoples and their dietary habits to understand matriarchy and the role of women in food security and community peace in Canada,” said Harriet V. Kuhnlein, Professor Emerita of Human Nutrition and founding Director of CINE.

Kuhnlein described one of CINE’s projects, the Kahnawake Schools Diabetes Prevention Project, a three-year community-based project focused on a primary prevention programme for non-insulin-dependent diabetes mellitus in a Mohawk community near Montreal.

Among others, the project organised community-based activities promoting healthy lifestyles and demonstrated that “a native community-based diabetes prevention programme is feasible through participatory research that incorporates native culture and local expertise,” said Kuhnlein.

According to Forum participants, the reintroduction of local food products is essential for feeding the planet – “here we see real democracy in action,” said one speaker – and a major effort is needed to avoid practices that exacerbate the negative impacts of food production and consumption on climate, water and ecosystems.

There was also a call for the post-Millennium Development Goal (MDG) agenda to ensure a healthy environment as an internationally guaranteed human right, with the Sustainable Development Goals (SDGs) which will replace the MDGS at the end of 2015, encouraging governments to work towards agricultural policies that are compatible with environmental sustainability and trade rules that are consistent with food security.

It was agreed that none of this will be easy to implement and will require both a strong accountability framework and the will to enforce it, including through recognition of corporate responsibility in the private sector.

As the world prepares for the post-2015 scenario, the Indigenous Peoples’ Forum in Rome said that it was crucial to incorporate food security, environmental issues, poverty reduction and indigenous peoples’ rights into discussions around the new goals of sustainable development involving citizens, governments, academic institutions, private corporations and international organisations worldwide.