UXBRIDGE, Canada, Jun 12 2012 (IPS) - Indigenous leaders from all over South America are making their way by foot, canoe and eventually on buses to be part of the Kari-Oca Caravan to Rio de Janeiro, to talk to world leaders at the United Nations Conference on Sustainable Development, Rio+20.

“We will be representing thousands of indigenous communities from all over South America,” Moi Enomenga, a Waorani leader, told Tierramérica just before he boarded a bus in Quito, Ecuador for the nine-day bus trip to Rio. Other indigenous leaders will join in along the way. 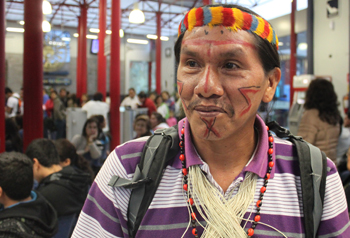 Moi Enomenga, just before boarding a bus in Quito, Ecuador, the starting point for the caravan to Rio de Janeiro. Credit: Courtesy of Moi Enomenga

The Waorani are an Amazonian indigenous people who live in eastern Ecuador, in an area of oil drilling activity.

Rio+20 is meant to serve as an intergovernmental forum for the adoption of solutions to the global crisis of sustainability, manifested in the repeated failure of the globalised economy, a food shortage, energy problems and global environmental woes like climate change and biodiversity loss.

“For years indigenous peoples have been divided. Now we are going to unite,” said Enomenga, who was born into an uncontacted community and is now president of the Quehueri’ono Association.

“Not everyone can hear the voice of Mother Earth from the jungle, and we want to bring that voice to Rio,” added Enomenga, who said he was prepared to walk to Rio if the bus broke down.

“Kari-Oca” means “white man’s house” in the Tupí-Guaraní language. It was the term used by the indigenous peoples living in the area where the city of Rio de Janeiro now stands to refer to the first settlements built by Portuguese colonisers.

The term also gave rise to “Carioca”, the word used to refer to inhabitants of Rio de Janeiro. Two decades ago, the first Kari-Oca conference was held parallel to the 1992 Earth Summit.

The Inter-Tribal Committee of Brazil, which is hosting the meeting, expects it to draw some 600 indigenous participants from around the world, who will prepare their message and recommendations to the high-level segment of Rio+20 taking place Jun. 20-22.

“We can’t keep going on the same path that we have been on the last 20 years,” said Hortencia Hidalgo Cáceres, an Aymara woman from Chile who is with the Indigenous Women’s Network of Latin America and the Caribbean for Biodiversity (RMIB).

“Real change is needed. We want to invite the world to a brighter future based on indigenous values and principles of ‘buen vivir’ (living well),” Cáceres told Tierramérica.

As opposed to the Western concept of “living better” – the belief that economic growth brings progress which in turn leads to the elimination of poverty – “buen vivir” or “living well” refers to living in harmony with nature while pursuing material, social and spiritual well-being for all members of society, but not at the cost of other members or the environment

Without adhering to these principles, the “green economy” many nations want to create as an outcome from Rio will represent a “false solution” to the crises of environmental degradation and social injustice, Cáceres said.

For Casey Box, program coordinator at the non-governmental organisation Land is Life, “Indigenous peoples have much to offer the international community as it tries to find its way forward to truly sustainable development.”

Land Is Life, an international coalition of indigenous communities and organisations based in the United States, has raised funds and helped coordinate the Kari-Oca Caravan and Summit.

“The goals of Rio+20 will be impossible to achieve without the traditional knowledge and long-established resource management practices of indigenous peoples,” said Box.

As many as 50,000 people are expected at Rio+20, including more than 130 heads of state and government. It is being held 20 years after the UN Conference on Environment and Development, or Earth Summit, hosted by the same city. The 1992 summit gave birth to three major environmental treaties on climate change, biodiversity and desertification.

More than 700 indigenous peoples joined the first Kari-Oca summit held in 1992 prior to the Earth Summit. It marked the birth of an international movement for indigenous peoples’ rights, and succeeded in gaining recognition for their important role in conservation and sustainable development.

“We are excited about going to Rio because there is an indigenous peoples’ space where we can talk about our concerns and share our knowledge and experience,” said Cáceres.

It will take 60 hours by bus for indigenous participants from Patagonia in southern Chile to reach La Paz, Bolivia. There they will join Enomenga and the others from the north, arriving from Ecuador via Peru.

The Kari-Oca Caravan will then take a good five days to cross the Andes and travel through Bolivia, Paraguay and southern Brazil to get to Rio on the Atlantic coast.

Indigenous peoples are eager to participate because it is only at such international meetings where they have the opportunity to be heard by government leaders and the public, Cáceres says. “When we come home these doors are closed.”

By going to Rio and expressing their views there, Enomenga and others from Ecuador are hoping their government will have greater respect for indigenous peoples’ rights and perspectives.

“There are two uncontacted communities near my home but there is the threat of oil exploration. They don’t want this. For them, taking the oil out of the ground is like taking blood out of their bodies,” he said.

Gloria Ushigua, president of the Association of Zápara Women, said that Ecuador’s “Socio Bosque” program, implemented by the Ministry of Environment to combat deforestation, has caused many problems for local communities.

The Zápara nation is located in the eastern part of the province of Pastaza, in the Amazon rainforest region of eastern Ecuador.

“My hope is to share my community’s story and discuss territory rights,” Ushigua said in a release.

Also in the Caravan is Celso Aranda from Sarayaku, a Kichwa territory in Pastaza, who is bringing a proposal called Kawsak Sacha, or Living Forests, to Kari-Oca.

This proposal is the Sarayaku people’s response to climate change and the destruction of nature, and describes how indigenous communities can protect ecosystems by maintaining ancestral land management practices.

After Kari-Oca II and Rio+20, “indigenous peoples will continue to work in our communities to strengthen our cultures and resist exploitation of our territories,” said Enomenga.

“We have a very clear message. Leave everything beneath the Earth.”