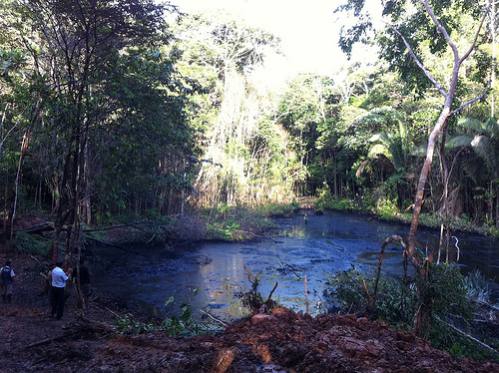 Oil-polluted water in the Amazon region of Loreto. Credit: Courtesy of the office of Congresswoman Verónika Mendoza

IQUITOS/LIMA, Sep 5 2012 (IPS) - Peru will debut a new mechanism for prior consultation with indigenous peoples by seeking their approval for a new stage of oil drilling operations in the infamous Lot 1AB in the northeastern Amazon region of Loreto.

Local indigenous leaders are still skeptical about the announcement, given that the region has suffered from the ongoing impacts of oil industry activities for decades.

From the open mouth of a jaguar painted on a wall emerges the declaration: “You cannot buy my rivers or my happiness.” In the background are the forest, the sun, the river, children, women and men.

The image, which covers the façade of the office of the Regional Organisation of Indigenous Peoples of the East (ORPIO) in the city of Iquitos, succinctly sums up the environmental defense headed up by native leaders in recent years.

Iquitos is the capital of Loreto, where oil drilling operations date back 40 years. Indigenous leaders from four river basins in the region, all members of ORPIO, told Tierramérica about the impacts of these operations on their communities and the environment.

“The government has ignored us and has not obliged the companies to comply with their commitments. If a parent abandons its child, who has to pay for these damages? The parent, the government. And in second place, the company,” said David Chino, vice president of the Quechua Indigenous Federation of Pastaza.

Chino was in Lima during the last week of August along with another three “apus” (leaders) to meet with authorities from the legislative and executive branches of government, representing communities in the basins of the Pastaza, Corrientes, Tigre and Marañón Rivers.

On Aug. 27, the indigenous leaders succeeded in getting a multi-sectoral commission, headed by the Presidency of the Council of Ministers, to agree to hold a consultation with local communities before signing a contract with the new operators of Lot 1AB, which is currently held by the foreign oil company Pluspetrol Norte.

This consultation will be the first implemented in compliance with the International Labour Organisation’s (ILO) Convention 169 on Indigenous and Tribal Peoples in Independent Countries, which gave rise to the adoption of a law and regulations for its application in cases of projects in ancestral indigenous territories.

In addition, on Sep. 5-7, government technicians will visit the Pastaza area to assess the extent of the damages, the native leaders told Tierramérica*.

In Loreto, oil contamination is concentrated around Lots 1AB and 8. According to a report issued in July by a congressional working group that toured the region, in some areas of the four river basins the degree of toxicity is so high “that the use of bioremediation to break down the oil would be useless.”

That same month, indigenous community members working as environmental monitors reported 25 unremediated environmental liabilities in Lot 1AB – 17 on the Tigre River, two on the Corrientes and six in the Pastaza River basin.

In Lot 8, nine liabilities were identified in the Corrientes River basin.

In August, state-owned oil company Petroperú announced that the government would organise an advance tender for three lots, including 1AB. This raised the alarm among indigenous communities, and their leaders, during their visit to Lima, urged the authorities to not let any new operators in until the existing pollution has been cleaned up.

“How can I let you back into my house if you have done me harm? You have to fix the damage for me to believe in you,” commented Chino.

The Presidency of the Council of Ministers stated in a communiqué on Aug. 28 that a consultation will be held with local communities before a contract is signed for exploitation of Lot 1AB, and Environment Minister Manuel Pulgar confirmed the announcement the following day.

Details on how the consultation will be carried out are still unknown.

“Which communities will be consulted? What are the terms and conditions? Indigenous peoples need answers to these questions, because there is a great deal of mistrust,” Verónika Mendoza, a ruling party member of congress who participated as an observer in the working group that drafted the report, told Tierramérica.

“We think it is good that they will hold a consultation. But how can they remedy all of the damage they have done to us in the last 40 years in just a short time? They need to explain that to us first,” said Achuar indigenous leader Andrés Santi, president of the Federation of Native Communities of Corrientes.

Peru does not have an up-to-date inventory of environmental liabilities. However, it has been determined that there are over 6,000 resulting from oil and gas industry operations between 1863 and 1993. Close to 300 of these pose significant danger and are located in the Amazon region, particularly in Loreto, according to engineer Jorge Villar of Peru’s energy and mines regulator, OSINERGMIN.

Moreover, between 2007 and 2011, indigenous environmental monitors recorded 112 new oil spills, of which 82 were found in the area of Lot 1AB and the remainder in Lot 8.

The main cause of the spills is the corrosion of the pipelines used to transport the oil, according to the congressional working group’s report. But representatives of Pluspetrol Norte claim that a number of them were caused by acts of vandalism which are currently under legal investigation.

The congressional report found that the executive branch does not sufficiently monitor these risks, and recommended better control and epidemiological studies to determine the extent of the health impacts faced by the local population.

“The gills of the fish are black, full of oil. We eat at least a kilo of fish a day. When it rains, the polluted rivers overflow and flood everything, the soils, the forest,” Alfonso López, president of the San Pablo de Tipishca Cocama Association for Development and Conservation, told Tierramérica.

The working group’s report also stressed that the maximum limit of total petroleum hydrocarbons (TPH) established for soil remediation in Lot 1AB is 30 times higher than in Lot 8, although the situation in both is similar.

“We will follow up on the recommendations to deal with this serious problem. For a great many years, no one has paid attention to these peoples,” opposition Congresswoman Marisol Pérez Tello, who also participated in the drafting of the report, told Tierramérica.

Photos and videos of the contamination observed by the lawmakers have been passed on to the environmental prosecutor’s office.