WASHINGTON, Jun 20 2012 (IPS) - Although they are only five percent of the global population, indigenous people account for up to 15 percent of the world’s poor, according to a new study published by members of the World Bank.

The highest percentages of indigenous people in proportion to the total national population are in China (36 percent), South Asia (32 percent) and Southeast Asia (10 percent), according to “Indigenous Peoples, Poverty, and Development”, a treatise on indigenous peoples in Asia, Africa and Latin America.

The Brookings Institute, a think tank here in Washington, recently cited figures that roughly 900 million people live in poverty – that is, they live on less than 1.25 dollars per day. 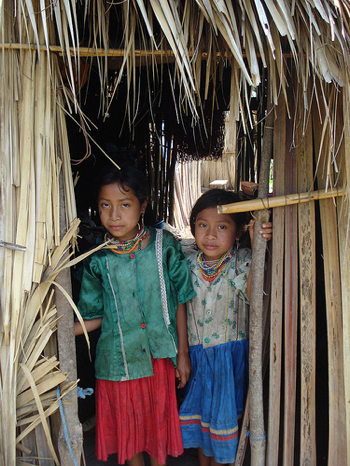 Two girls from the Chortí indigenous community in their doorway in a village in Chiquimula. Credit: Danilo Valladares/IPS

The figure underscores one of the most significant issues facing development experts today: among many of the world’s poor, economic progress is being stymied, to the amazement of some of the world’s most highly regarded and reputable economists.

“You would think that the people at the lower end of the spectrum would be making more progress, but that hasn’t been the case,” Shantayanan Devarajan, the World Bank’s chief economist for Africa, said.

While there is no universally accepted definition of what constitutes an indigenous person, Marcelo Giugale, the World Bank’s director of poverty reduction and economic matters for Africa, defines it as “people bonded together by sharing” – primarily sharing resources, culture and experiences.

Typically, the 350 million indigenous people living in the world today have a higher rate of poverty because they are marginalised economically, politically and geographically.

The United Nations (U.N.) has recently increased its focus on indigenous people, with the U.N. Development Programme (UNDP) holding the U.N. Permanent Forum on Indigenous Peoples in May to discuss how to increase the participation of indigenous peoples in politics.

“The ‘poverty trap’ is not an economic poverty trap, it’s a political one” for indigenous cultures, argued Devarajan. He pointed to apartheid as an instance where indigenous people were politically excluded solely for racial reasons.

The increased emphasis on indigenous people is due partly to the U.N.’s Millennium Development Goals – among them are ending poverty and hunger, and achieving universal education, gender parity, environmental sustainability – and the concentrated effort to improve the plight of the world’s poor.

“We will not be able to overcome poverty and inequality or achieve the Millennium Development Goals in our region if we don’t improve everyone’s lives, especially the most excluded,” said Heraldo Muñoz, director for Latin America and the Caribbean at the UNDP.

He pointed to “integrated social policies, financed through more progressive fiscal structures” to help bring about the necessary change.

The lack of economic progress for indigenous communities has been particularly prominent in Latin America. According to UNDP’s 2010 Regional Human Development Report on Inequality, extreme poverty, where people live on a dollar or less per day, in Latin America and the Caribbean is twice as high among the region’s indigenous peoples.

The only sustained progress in poverty for indigenous people in Latin America was in Chile, where levels fell from around 25 percent to about 15 percent between 1996 and 2005, according to Harry Anthony Patrinos, lead education economist at the World Bank.

Nevertheless, poverty levels in Latin America as a whole are at the lowest level in 20 years, according to the Economic Commission for Latin America and the Caribbean (ECLAC).

“Poverty and inequality continue to decline in the region, which is good news, particularly in the midst of an international economic crisis,” said Alicia Barcena, ECLAC’s executive secretary.

“However, this progress is threatened by the…gaps in the productive structure in the region.”

Worldwide, the greatest success among indigenous people has been in China. China has been the only place where the reduction of poverty was higher in the indigenous minority than in the majority – in this case, the Han people.

There is one theory as to why the Chinese have been so successful in this regard. “China targets regions or areas rather than people,” Patrinos explained, by offering indigenous people more programs that allow for systemic changes, rather than vague political gestures meant to garner votes.

In the United States, Native Americans have historically had a difficult relationship with the European immigrants who took over their land and eventually condemned a significant of proportion of the native population to reservations and poverty.

The latest statistics from the U.S. Census Bureau put Native American poverty levels at 25.3 percent. But in 2010, they found that comparatively, only 15.1 percent of the total population was beneath the poverty line.

Yet those who viewed themselves as indigenous – that is, of Native American blood – in the 2010 U.S. Census comprised only 1.7 percent of the total U.S. population, or 5.2 million people.

Poor treatment of Native Americans has extended into modern times. In 2000, Congress allocated 1.6 billion dollars to the Bureau of Indian Affairs, but not all of the funds were paid.

On Monday, the U.S. Supreme Court, by a five to four ruling, decided that the federal government was obligated to repay Native American tribes for the expenses incurred by Native Americans running federal programs such as education, homeland security and environmental protection.