People’s Summit Alive With the Sound of Voices

RIO DE JANEIRO, Jun 16 2012 (IPS) - Swallowed up in the crowd in front of the spectacular Guanabara Bay, indigenous leader Apolinario from Brazil’s Amazon rainforest acted as an impromptu guide on the first day of the People’s Summit in Rio de Janeiro.

He helped journalists and participants from all over the world to find their thematic tents and press rooms at the launch of the parallel forum coinciding with the United Nations Conference on Sustainable Development, Rio+20, where gestures of solidarity like these lifted moods and helped bring order from chaos. 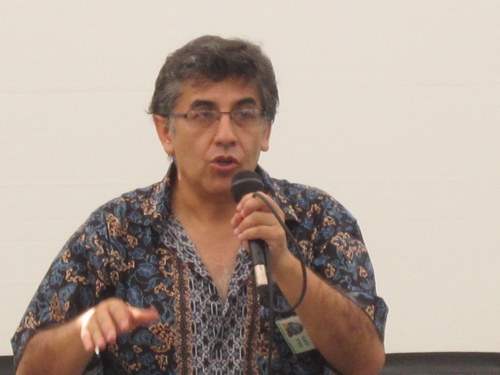 Pablo Solón speaking on the right to water in one of the tents at the People's Summit. Credit: Mario Osava/IPS

The canvas tents housing the People’s Summit’s debates and conferences were still not labelled with their identifying numbers at the start of activities. Map in hand, a woman who identified herself as part of the “cleaning crew” also helped the visitors milling around the Aterro do Flamengo park in search of directions.

“I’ll get my people organised,” Apolinario assured TerraViva, arriving with a large and disorientated entourage for the start of the parallel forum, which concludes Jun. 22.

Indeed, Plenary No. 3 on indigenous peoples was the only event to start on time, with a religious ritual organised by different ethnic groups, followed by a press conference.

“We have immense natural resources but we cannot exploit them, and we have never been paid the environmental compensation promised by the government,” said Sebastiao Rodrigues, head of the Association of Indigenous Communities of the northern state of Acre, a view shared by many others interviewed by TerraViva.

The People’s Summit has brought together civil society organisations from all over the world, and is seeking an alternative to the “green economy” that will be defined by heads of state and government at the climax of the Rio+20 conference on Jun. 20-22.

“Native peoples know perfectly well what sustainable development involves. Our harmonious coexistence with nature is a living portrayal of our way of life, which neither destroys nor degrades,” said Sonia Guajajara, a coordinator of the Articulation of Indigenous Peoples of Brazil (APIB).

Miguel Palacín, a Quechua Indian from Peru and head of the Andean Coordinator of Indigenous Organisations (CAOI), said the green economy “exists to legitimate and continue to rely on the capitalist system that has put us where we are today.”

Based on the capitalist economic model, transnational corporations “are looting our natural resources, destroying biodiversity, appropriating our lands to grow biofuels and creating a global crisis,” he said.

It is not an easy task to organise more than 16,000 people attending nine days of debates on water, clean energy and organic agriculture, among hundreds of other thematically-grouped topics.

However, the groups gradually found their tents or occupied empty ones and began their discussions.

At one of these, representatives of religions that originated in Africa, like Candomblé, attired in ceremonial costume, described how their religions contribute solutions for the planet.

Marcelo Reis, a Brazilian Candomblé priest, explained that this cult is based on two pillars: the ancestors, and nature.

“All the ‘orishas’ (deities) are linked to an element of nature. We need greenery for our baths, rituals and meals. It is a religion that is intimately related to sustainability,” he said.

At the forum’s food counters, most providing organic food, more participants were discussing another pillar of sustainable development, family agriculture.

In other tents, clothes and ornaments made from recycled materials were on sale. Nearby, a group heatedly debated the solidarity economy, which is marketing these and other products on display.

Luis Salcedo of Colombia, the coordinator of the Intercontinental Network for the Promotion of the Solidarity Economy in Latin America and the Caribbean, said it was necessary to “redemocratise the economy” in order to democratise community political practices.

“The solidarity economy makes a very important contribution, as a network in which economic resources circulate, but do not leave: they cannot be used to speculate elsewhere; instead they contribute to endogenous development,” Salcedo said.

On the opening day, Greenpeace launched a proposal for “zero deforestation” in Brazil. Paulo Adario, Greenpeace Brazil’s Amazon Campaign director, said meeting this goal by 2020 would require the adoption of local laws.

The spectrum of proposals being discussed by such a large number of diverse organisations created a multi-lingual buzz this Friday, mingled with sounds and melodies of all sorts as well as the noise of Rio de Janeiro’s chaotic and polluting traffic.

But one voice made itself heard above the babble: a “community radio set” mounted on a bicycle, with a simple wooden box as a speaker, playing a selection of music from every corner of the world.

Pedro Araujo, the cyclist and commentator for Summit Radio, said riding freely all around the site somehow summed up the philosophy of the meeting. “This is free information,” he said.

The uplifted voices of all present, with their different accents, began to be heard more distinctly by the end of the day.