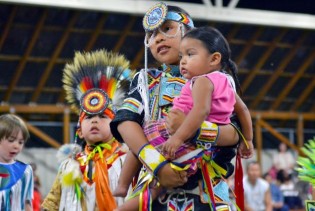 By Matthew Charles Cardinale
In a lawsuit that could have nationwide implications for ballot-box access for tribes across the United States, Native Americans from Montana are pushing for early voting precincts to be placed closer to the locations of three tribal reservations - the Crow, Northern Cheyenne, and Fort Belknap reservations.

By Sudeshna Chowdhury
It’s Sarah Schilling’s usual manner of greeting when she meets other members of her tribe: “Aanii Sarah Schilling n'diznakaas, which translates to ‘Hello, Sarah is my name’ in English,” she said.

By Carey L. Biron
After 17 years in litigation, the U.S. government has announced that hundreds of thousands of Native Americans will soon be receiving payments from what has been described as the United States’ largest class-action lawsuit, which accused the government of massive mismanagement of trusts covering indigenous peoples’ monies and lands.

By Carey L. Biron
A top United Nations official has presented the first ever international investigation into the situation of indigenous peoples in the United States, urging the adoption of new policies and mechanisms to “address persistent deep-seeded problems related to historical wrongs, failed policies of the past and continuing systemic barriers”.

By Ethan Freedman
Although they are only five percent of the global population, indigenous people account for up to 15 percent of the world’s poor, according to a new study published by members of the World Bank.
ADVERTISEMENT ADVERTISEMENT