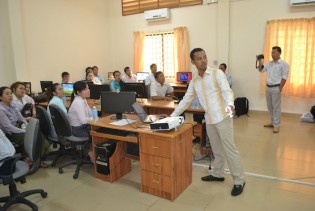 By Michelle Tolson
“Cambodian garment workers have two handcuffs and one weapon [against them]. One handcuff is a short-term contract [10 hours a day, six days a week]. Even if they get sick, if they get pregnant they feel they have to get an abortion so they don’t lose their jobs.

By Michelle Tolson
“I prefer the dam to the fish,” says middle-aged farmer Ton Noun, when asked his opinion on a proposed 400 megawatt dam on Sesan river near his home in northeastern Cambodia. Then he chuckles and asks, “What fish?”

By Michelle Tolson
The violence that defined Cambodia during the years of the Khmer Rouge (1975-1979) may have been relegated to the realm of history, but the actions of the ruling party ahead of the Jul. 28 election smack of the dirty politics that once ruled this Southeast Asian country.

By Michelle Tolson
Dotted with rice fields flanked by palm trees, Cambodia’s southeastern province of Kampong Speu is nothing short of picturesque. But behind the idyllic exterior is an on-going struggle to turn this region’s natural beauty into a global attraction and improve the lot of poor local farmers, as the neighbouring beachside Kampot province did just three years ago.

By Michelle Tolson
Times are tough in this Southeast Asian nation of 14 million people, where over 30 percent of the population lives below the poverty line of a dollar a day. Formal employment is hard to come by and many workers find themselves drifting in the murky waters of the “informal” market, where wages are unregulated and labour laws are seldom honoured.
Next Page »
ADVERTISEMENT ADVERTISEMENT