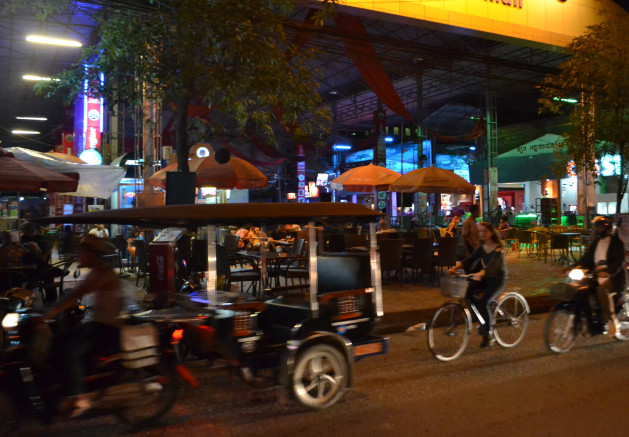 A crackdown on sex workers has driven many to continue business on the streets or at entertainment centres in Phnom Penh. Credit: Michelle Tolson/IPS.

PHNOM PENH, Oct 24 2013 (IPS) - “We are not saying that all people become sex workers, but you make more money,” Virak Horn, a 32-year-old gay sex worker who works freelance in Cambodia’s capital Phnom Penh, tells IPS. He earns enough to support his family and pay for his college degree.

It is an observation Melissa Hope Ditmore, a New York-based research consultant on gender, development, sex work and HIV, too makes. “Most of the sex workers I spoke to in Cambodia, the U.S. and elsewhere,” she tells IPS, “described sex work as the least bad among no great options; some even described it as a good option.” Ditmore carried out extensive research for a report she prepared for the rights group Sex Workers Project in 2009.

Are rights groups like Equality Now overreacting then by protesting against the recommendation of the United Nations to decriminalise the sex trade, saying it would “jeopardise efforts to prevent sex trafficking”?

“Most of the sex workers I spoke to in Cambodia, the U.S. and elsewhere described sex work as the least bad among no great options; some even described it as a good option.”

U.N. agencies published two reports in 2012 focusing on HIV prevention – Sex Work and the Law in Asia and the Pacific, by the Joint U.N. Programme on HIV/AIDS (UNAIDS), and HIV and the Law, by the U.N. affiliate Global Commission on HIV and the Law. Criminalisation of sex work was mentioned as one of the primary reasons affecting HIV responses.

But Equality Now took strong exception to this conclusion, urging the U.N. to “listen to survivors” of sexual exploitation and reconsider its reports.

“Equality Now is trying to say prostitution itself is a human rights violation,” Andrew Hunter, president of the Global Network of Sex Work Projects (NSWP) and programme and policy manager for the Asia Pacific Network of Sex Workers (APNSW), tells IPS. However, he echoed what U.N. Women, the agency for gender equality and women’s empowerment, said in an Oct. 2013 note: that sex work cannot be considered the same way as trafficking or sexual exploitation.

Researchers and sex workers also say Equality Now is unfair in asserting that the reports did not factor in the views of sex workers. The Global Commission on HIV and the Law, they say, received 680 submissions from 140 countries for its report.

For instance, the Purple Sky Network of the Greater Mekong Region, which includes Cambodia, Thailand, Vietnam and Myanmar, said the efforts of their transgender and MSM (men who have sex with men) sex workers for safe sex stopped after the police started using condoms as evidence of sex work and closed down venues in Thailand and Cambodia.

Prostitution became illegal in Cambodia when this Southeast Asian country implemented the Law on Suppression of Human Trafficking and Sexual Exploitation in 2008. Some 381 brothels were shut down in an ensuing police crackdown, forcing sex workers to shift to entertainment venues such as beer gardens, karaoke bars and massage parlours.

Cheryl Overs, a member of the technical advisory group for the Global Commission on HIV and the Law, documents this shift extensively in a September 2013 report on sexuality, law and activism in Cambodia. Some 21,463 new ‘entertainment workers’ emerged between 2008 and early 2009, she tells IPS. They would typically earn 50-110 dollars a month, but needed an average of 177 dollars to survive, she adds.

Phal Sophea, who worked 10 years as a beer seller in Siem Reap in northwestern Cambodia, recounts the horrors of the experience. Her pay was a miserable 50 dollars a month, she was in danger of alcohol abuse, and forced to drink up to 12 beers a night in the company of customers who would touch her and sometimes burn her with cigarettes.

When she was raped, neither her boss nor the police helped her. “The job was hell,” she tells IPS, “but I needed it.”

Sophea is now the Siem Reap representative for the Cambodian Food and Service Workers Federation (CFSWF), an entertainer-led collective which has won several rulings against beer companies.

The plight of street-based sex workers was worse. They bore the brunt of police brutality, says Horn, who is also the MSM project coordinator for the HIV/AIDS service Cambodian People Living with HIV network (CPN+), and a member of the Women’s Network for Unity (WNU), a sex worker-led collective which also supports male and transgender sex workers.

A reported 440 street-based sex workers were arrested in Phnom Penh as part of a cleanup campaign for the ASEAN Summit in 2012, according to Overs.

Sebastian Krueger, communications officer for the Public Health Programme of the Open Society Foundation (OSF), tells IPS that they too support decriminalisation of sex work. “We support sex worker-led organisations and advocates working to end violence and police abuse, ensure access to legal services, challenge and change laws and policies that harm health, and increase access to appropriate health services.”

While recording a decline in overall HIV prevalence rates in 2011 in the country, the National Centre for HIV/AIDS Dermatology and STD (NCHADS) had noted that they remained high among female entertainment workers (14 percent).

The World Health Organisation released a report this month with guidelines to implementing HIV and STI programmes both by empowering sex workers and adopting a community-led approach to “planning, delivering and monitoring service for sex workers.”