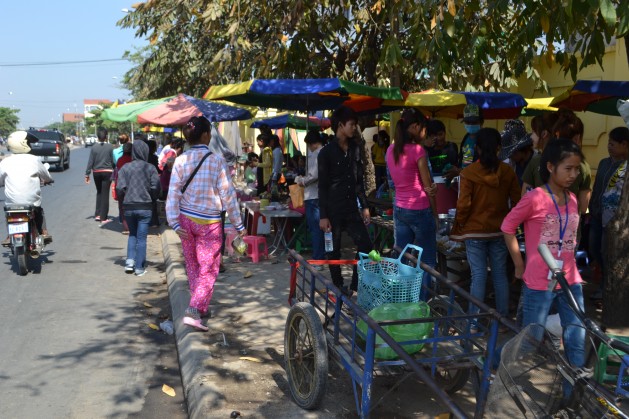 PHNOM PENH, Mar 4 2014 (IPS) - An uneasy calm prevails in Cambodia after the government crackdown on protests by garment workers in January. With public gatherings banned and charges framed against 23 union leaders and activists, labour discontent may not be spilling on to the streets, but it is simmering.

Prime Minister Hun Sen has now called for removal of the ban on public assembly.

“This is a critical juncture for garment workers and trade unions to use their leverage as a voting bloc to pressure both parties for better wages."

“The government should not be suppressing the demonstrators if they want to prove that Cambodia is a democratic country,” Phorn Sreywin, a 26-year-old garment worker, told IPS.

She has the support of the Workers Information Centre (WIC), which supports women in the garment industry, but voices asking for higher minimum wages in this impoverished Southeast Asian country appear to have been muffled for the time being.

“There should never have been a ban as this contradicts the Constitution and treaties ratified by Cambodia,” Naly Pilorge, Director of the human rights NGO LICADHO, told IPS by e-mail.

The Garment Manufacturers Association in Cambodia (GMAC), 93 percent of which comprises foreign business owners, mostly from Singapore, Hong Kong, Taiwan and South Korea, has cited the International Labour Organisation’s (ILO) convention number 87 to claim that workers have no “right to strike”.

“Freedom of association cannot be used as an excuse to get away with illegal behaviour and undermine a government’s ability to govern,” said a statement on GMAC’s website, alluding to the protests of Jan. 2-3 by garment workers, which led to military action.

GMAC claims that the strike by garment workers was violent.

“A multiplicity of unions in the workplace continues to create challenges, including but not limited to an increasing mass of unrepresentative unions, infighting amongst unions on the factory floor to gain popularity, misrepresentation of membership numbers due to double counting, and inability to engage with the unions constructively,” it said.

Activists, however, say that this amounts to intimidation by GMAC.

International trade unions around the world have protested in front of Cambodian consulates in support of the country’s garment workers.

Trade unions have also condemned GMAC for stating that it condoned the military action on striking garment workers Jan. 3 that killed four of them, left one missing and seriously injured over 30.

“The response from the Cambodian government is very oppressive,” said Pranom Somwong, a labour activist and consultant for the Clean Clothes Campaign who helped organise a protest in Bangkok in front of the Cambodian consulate.

She also told IPS that factory owners were “confrontational” vis-a-vis the unions. “Denying workers the right to freedom of assembly and the right to a living wage is unacceptable,” she said.

Labour activists are now being threatened with loss of job or with lawsuits, Sophea Chrek, interim coordinator for WIC, told IPS.

Tola Moeun, head of the advocacy organisation, Community Legal Education Centre, explained that factory owners have threatened labour leaders with lawsuits. “Yang Sophorn (president of the Cambodian Alliance of Trade Unions) was sued by suppliers (factory owners) for mobilising workers to strike,” he pointed out.

He highlighted another problem.

Despite 90 percent of garment workers being women, men tend to lead the labour unions, partly owing to the combative environment. “Women do not feel confident in their positions or are not provided enough opportunities to grow, especially due to their poor wages and short term contracts,” he told IPS.

“Women workers need to lead and use their natural leadership quality to deal with the environment, using better negotiation skills with the thugs in factories, with the government and with the elites who are looking after their bosses’ interests,” Khus told IPS.

Labour researcher Dennis Arnold has written a report detailing how the bargaining power of workers in Cambodia weakened under the 2005 WTO free trade agreement (FTA).

He found that, prior to the agreement, most workers in registered factories had long-term contracts with holiday pay benefits, including sick and maternity leave. But afterwards the contracts became short-term, covering just three to six months, and with no benefits. Factory owners said western brands preferred flexibility in their contracts but the shift also made factory workers easier to manage.

Arnold told IPS that the elite siphon off money through “bribes, bureaucracy and corruption”, contributing to the already high cost of production, and this is used by factory owners as a reason for not raising wages.

“This is a critical juncture for garment workers and trade unions to use their leverage as a voting bloc to pressure both parties for better wages,” Arnold said. “This is part of broader efforts to redistribute wealth and power in favour of workers – and you see very clearly the deep resistance to this by GMAC and the ruling Cambodian People’s Party (CPP).”

The opposition Cambodian National Rescue Party (CNRP) is completely on board.

Mu Sochua, CNRP’s elected lawmaker and Director General of Public Affairs, told IPS, “Strong trade unions, strict implementation of the labour law (against short-term contracts) and ILO conventions must be upheld and the government and global brands should be allowed no excuses to delay negotiations for living wage.”

A spokesperson for H&M, one of the largest brands sourcing from Cambodia, told IPS on e-mail that the company plans to work towards a living wage “by 2018”.