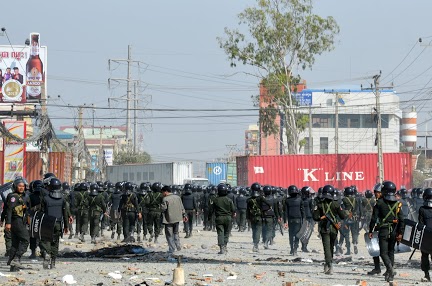 PHNOM PENH, Jan 9 2014 (IPS) - “Cambodian garment workers have two handcuffs and one weapon [against them]. One handcuff is a short-term contract [10 hours a day, six days a week]. Even if they get sick, if they get pregnant they feel they have to get an abortion so they don’t lose their jobs.

“The second handcuff is the low wage,” Tola Moeun, head of the Community Legal Education Centre (CLEC), which advocates for workers rights, told IPS from the organisation’s headquarters on the outskirts of Phnom Penh. “The weapon used against them is violence, both mental and physical.”

About 90 percent of garment workers are young women, mostly in their teens and twenties.

His words, which came just days before mass protests broke out in the Cambodian capital, proved prophetic as garment workers took to the streets Dec. 24 until their demonstrations were brutally quashed by Prime Minister Hun Sen’s private military the first weekend in January, resulting in five fatalities and over 30 serious injuries.

Chrek Sophea, interim coordinator of the Workers’ Information Centre (WIC), which helps factory workers organise, told IPS workers cannot survive on the government’s proposed wage, and that it is in violation of Cambodia’s labour laws.

According to a 1997 law, “The minimum wage must ensure every worker of a decent standard of living compatible with human dignity.”

Tola agreed. “The minimum is for eight hours, so most work 10 hours to get a higher income to have just enough to sleep in a shared room. Most workers are in debt, borrowing about 50 dollars each month, and can only pay 10 dollars interest on the loan each month.” Workers struggle to send money home to their families in the countryside.

The Messenger Band (MB), made up of six former garment workers who write songs in the traditional Cambodian folk style, also supported the protest. Sothary Kun, a singer known as “Ty Ty”, told IPS “problems of debt and migration and the difficulty of workers to earn money and repay debt for their families reach into the hearts of audiences very quickly because they have experienced it all themselves.”

Launched a decade ago, MB works with WIC as part of the United Sisterhood Alliance, a collaborative of grassroots groups serving farmers, factory workers and sex workers.

“MB and WIC discussed the strategy of supporting peaceful protests by garment workers demanding a minimum wage of 160 dollars a month, so it is very important for us to be there together with the workers,” Kun said.

MB’s songs are the oral histories of the working poor. “We sang a number of songs to encourage and keep workers together while they were protesting in front of the Labour Ministry. We also distributed lyrics of songs related to workers, so that they could sing along,” Kun explained.

The peaceful events took a dark turn last Thursday. Chrek said “I witnessed the workers’ peaceful strike at around 9:30AM on Jan. 2, when my colleagues and I travelled around the factory compounds located on the outskirts, including the place where the clash happened.

“I stopped by and saw them gathering in front of the Canadia Special Economic Zone near the local market. Workers who joined the strike were singing and dancing and chanting their message.”

The opposition Cambodia National Rescue Party (CNRP), protesting the results of the July elections, which they say were rigged, joined the garment worker protest with chants of “Hun Sen Must Go”, and as the crowds swelled to tens of thousands, international media attention was drawn.

The military stepped in the night of Jan. 2, brutally beating and arresting labour leaders and protesting monks. Pictures of the bloodied trade unionists were widely shared on social media, which seems to be the point when the protests veered out of control.

Srun Srorn with the CamASEAN youth group told IPS “It is possible people in the crowds were hired or ordered to create violence, and those people were not shot, or just created violence and then escaped.”

Thida Khus, director of SILAKA, which supports women’s organising, told IPS “Some of our men noticed this strategy in the first [CNRP] demonstration last September. These agitators have been used in all the previous events, including the [Jan. 4] crackdown at Democracy Park, trying to justify the shooting at unarmed protesters.”

CNRP lawmaker-elect Mu Sochua mentioned Hun Sen’s Third Hand on her Facebook page. She told IPS “Throughout the three-month protest, CNRP has appealed for non-violence. CNRP, including its top leadership, went through non-violence training and took to Democracy Square where thousands of people came regularly to express their opinions. Our rallies have never been violent.”

By Monday Jan. 6, it was discovered that the five young men killed were in fact garment workers and another 35 in the hospitals were also factory workers.

During the crackdown, a number of protesters were also arrested, including labour leaders. The Cambodian League for the Promotion and Defence of Human Rights (LICADHO) reports that 23 detainees are being held in an unknown location.

The government has sinced banned public gatherings of 10 or more people.

WIC, which is careful to not take political sides, became concerned when the garment protesters joined with the CNRP. As a non-partisan women’s organiser, Chrek believes both sides need to focus on working together, not blaming each other.

“It creates an environment of instability, fear, tension and anger. Our country has been through a lot of painful experiences resulting from violent responses.

“The current political chaos showed that political parties, both ruling and opposition, do not have a real commitment to solving problems, and often innocent and ordinary citizens and the powerless are affected. I call on all parties, including union leaders, the opposition party and the ruling party to act together in a mature manner addressing the current situation by setting problems aside.”