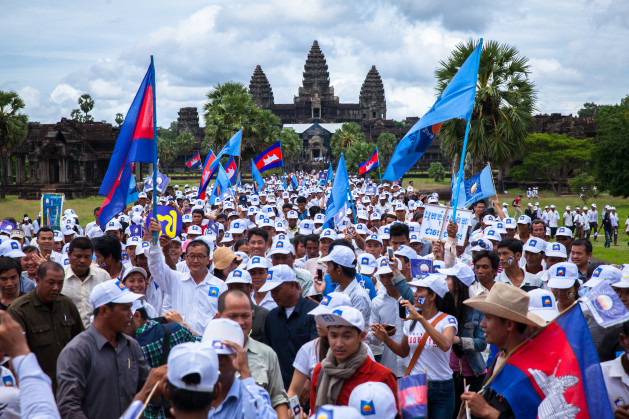 PHNOM PENH, Jul 27 2013 (IPS) - As Cambodia readies for general elections Sunday Jul. 28, the youth, who make up 36 percent of the country have signaled they are eager for ‘change.’

‘Change’ is their main slogan as they campaign for the opposition party on the streets of the capital every day. They are hoping to make a dent in the dominance of the ruling Cambodian People’s Party (CPP), which currently holds 90 out of 123 seats in parliament. The CPP government has been led by Premier Hun Sen for 28 years.

“They are more enthusiastic, louder and they are paying for their own gas and food. I saw a guy with CPP campaign stickers on his bike. I said something to my friend about it, like ‘there goes the CPP,’ and he heard me. He said ‘No, my friend, they are paying me five dollars a day to do this but I am not with them.’”

Half the country lives on two dollars a day, making five dollars a tidy sum of money to ‘work’ the campaign trail.

Srun Srorn, civil society election observer for the CAM ASEAN Youth Advocacy group, said times have been hard for youth, particularly for those who migrate from the countryside to the cities to work for monthly wages as low as 60 dollars. From this income many try to send remittances to parents who have lost out due to land grabs from dubious foreign investment.

The growing wave of evictions has left an estimated 20 percent of Cambodians landless. It is this disenfranchised group that is keen on change.

The rising discontent got an unexpected boost when opposition leader Sam Rainsy returned to the country Jul. 19. He was greeted in Phnom Penh by about 100,000 supporters and a royal pardon from the King. Self-exiled in France since 2009 to avoid charges levelled by the ruling party, Rainsy told supporters the country was at a “turning point” and that he was ready to risk his life to bring change.

“This is the biggest campaign that I have ever seen in my life. Rainsy’s presence has made a big difference. The town was packed,” said Sokunroth. “My parents called me three or four times a day asking me to quit, but I told them I can’t.”

Young CNRP supporters did not experience the Khmer Rouge years 1975 to 1979, but they saw the impact it had on their parents. “People that lived during that time have bad dreams and nightmares every night,” said Sokunroth.

Bill Herod, a retired NGO worker, said most Cambodians outside the capital are content with the way things are because they remember how bad it can get. “Things may change in time, but at this point the ‘average’ Cambodian is virtually basking in the best quality of life in the whole history of the Khmer people and is unlikely to want to rock the boat.”

The young and excitable population have faced unrest already as they struggle for a free and fair election. CNRP supporters were attacked with rocks in a spate of incidents this week, said Tola Moeun, head of the labour programme at the Community Legal Education Centre. “From what we see, the CPP group is trying to provoke violence from the youth, as they know they are very sensitive.”

“Compared to the last elections, this year is more exciting with many more supporters  prepared to stand up and say the things they want to say,” said Srun. He looks to the government, NGOs and international bodies to collaborate to reduce unrest.

The secretary general of the CNRP in North America, Pretty Ma, said they are working for a contingency plan in case of strife.

“We do not think that violence is the way to solve problems. We plan to appeal to the government [of Cambodia]. It is their responsibility to address that.” North American party representatives are also looking for support from U.S. congressional representatives.

Cambodians abroad like Pretty Ma, many of who migrated in the Khmer Rouge years, have been instrumental in garnering some international support for their homeland. Sam Rainsy grew up in France after fleeing Cambodia’s war with his family as a child.

Researcher Gea Wijers of the Netherlands has studied Khmer living abroad looking to return to help build their homeland.  She told IPS they struggle to reconcile their experiences of democracies with those of Khmer living in the homeland who have yet to know it.

The Failed State Index for 2012 declared the country at ‘warning’ level, ranked at 41 out of 178 countries, just five spaces below Congo (Republic) at 36. Cambodia earned particularly poor marks in the “rise of factionalised elite” and “legitimacy of the state”.

With these structural flaws, the country faces many obstacles that might be greater than its current youthful desire to transform the system. How Rainsy guides his supporters through the election outcome will be watched keenly.