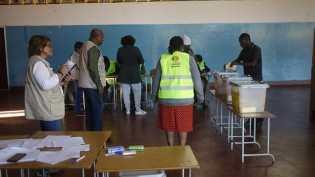 By Rebekah Funk
South Africa’s May 7 elections mark the first time in democratic history that those born into Nelson Mandela’s post-apartheid ‘Rainbow Nation’ can vote.

By Abdullah Omeed
About a third of the voters in the Afghanistan presidential election were women. That still gives Afghan women a say in running the country, as never before.

By Karlos Zurutuza
"I don’t dare tell you who the murderers are but their target is just us, Turkmens," says Ahmed Abdulla Muhtaroglu, sitting by the portrait of his brother who was killed last year.

By Manipadma Jena
“Men just do not want to give up their seats, it’s as simple as that,” says 67-year-old candidate in the Indian election Subhhasini Ali, voicing a gloomy view across women’s groups in India.

By Amantha Perera
For over a quarter of a century Uhla Min has lived under the spell of “The Lady”, the popular nickname for Nobel Peace Laureate Aung Sung Suu Kyi.

By Diego Arguedas Ortiz
Meeting Costa Rica’s self-imposed goal of being the first country in the world to achieve carbon neutrality by 2021 will depend on the priority given this aim by the winner of the second round of the presidential elections in April.

By Zofeen Ebrahim
Former parliamentarian Jamshed Dasti, known in his hometown of Muzaffargarh as Rescue 1122, Pakistan’s equivalent of an emergency number, is now a dubious hero. On Apr. 4, a district court served him a three-year prison sentence and a fine of 5,000 rupees (50 dollars) for presenting a fake degree to become eligible for a seat in parliament. He filed an appeal in the Lahore High Court which has overturned his conviction and acquitted him.

By Ashfaq Yusufzai
“My sole motive is to serve my people, especially women who have had no role in politics so far. I feel we can make progress only by bringing in women into mainstream politics.”
Next Page »
ADVERTISEMENT ADVERTISEMENT