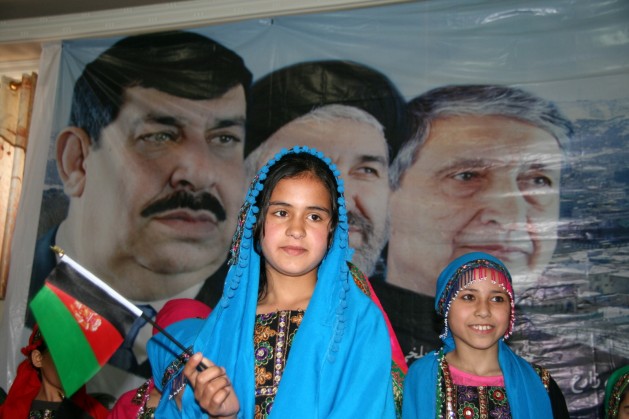 KABUL, Apr 2 2014 (IPS) - Ethnicities will come to the fore in the Afghan elections due Saturday this week, even though it appears that the young are beginning to break away from such loyalties.

On Apr. 5, around 12 million voters will have the chance to elect a new president to replace President Hamid Karzai, constitutionally barred from a third mandate.

"What is more important is that the people – particularly the civil society – have pushed the candidates to present articulated platforms.” -- Aziz Rafiee, director of the Afghan Civil Society Forum Organisation

Officially opened on Feb. 2, the race remains open and it’s still hard to predict who will get the chair at the Arg, the presidential palace in Kabul where Karzai has been since 2001 – just after the overthrow of the Taliban regime.

The political and economic power Karzai has accumulated is likely to be inherited by his replacement – whatever the ethnicity.

Pashtuns form the largest ethnic group in Afghanistan, about 40 to 60 percent, followed by Tajiks, Hazaras and Uzbeks. Precise numbers are disputed, and ethnicities often overlap.

There are three in the lead among the eight candidates: Ashraf Ghani Ahmadzai, an academic and former World Bank official and former minister of finance; Abdullah Abdullah, former foreign minister and a prominent leader of the anti-Taliban Northern Alliance and Karzai’s main rival in the disputed 2009 elections; and Zalmai Rassoul, national security adviser to President Karzai for eight years and foreign minister 2010-2013. He is seen as the contender backed by the outgoing president.

Many promises are being made – reconstructing the fragile economy, relaunching the peace process with armed opposition groups, and bringing security to the war-torn country – but the contenders seem to focus above all on ethnicity.

“The candidates are relying on ethnic, linguistic, or religious affiliation, because they do not have any political source of legitimacy,” Hamidullah Zazai, managing director of Mediothek Afghanistan, an organisation promoting pluralism in the media, tells IPS.

Aziz Rafiee, director of the Afghan Civil Society Forum Organisation, tells IPS “there are five important factors in the voting process: ethnicity, regional location, language, branch of religion and political affiliation. Amongst these five dividing and sometimes overlapping lines, ethnicity is still considered the most important by many voters.”

To ensure broader constituencies, candidates have drawn the political chessboard also along ethnic lines: Zalmai Rassoul, considered a weak candidate without the support of Karzai’s pervasive power system, has chosen as his running mate the Tajik Ahmad Zia Massoud, brother of Ahmad Shah Massoud, who was the iconic commander of the Northern Alliance before he was killed in 2001. For second vice-president he has proposed Habiba Sarabi, a Hazara, former governor of Bamiyan province.

Rassoul does not speak Pashtu fluently and is not regarded by many Afghans as a “real Pashtun”. He enthusiastically announced the support of both Qayum Karzai, President Karzai’s elder brother (with a huge constituency in Pashtun-dominated south Afghanistan), and Nader Naeem, son of Mohammed Zahir Shah, the last king of Afghanistan from 1933 until 1973.

Abdullah is a mixed Tajik and Pashtun, but he is seen as a Tajik due to his prominent role within the Tajik-dominated Northern Alliance. “By choosing for vice-president the Pashtun Mohammad Khan, he made an interesting choice,” Fabrizio Foschini, researcher with the Afghanistan Analysts Network, tells IPS. “Mohammad Khan is a member of the political branch of the Hezb-e-Islami party, and thanks to him Abdullah can compensate his weakness in the south-south east of the country.”

However, according to Foschini, Abdullah’s real strength is his second vice-presidential candidate, Mohammed Mohaqeq, a Hazara who could secure a large number of votes in the central areas.

Some believe that Abdullah is losing ground while Ahmadzai is gaining. “Ghani [Ahmadzai] had a stroke of genius selecting for vice-president General [Abdul Rashid] Dostum,” says Foschini. “While the Hazara and Tajik vote is highly fragmented, the Uzbek vote will go almost completely to Dostum. Prior to Ghani’s choice, nobody would ever have guessed that an Uzbek might aspire to the second chair.”

To be accepted as running mate, the Uzbek Abdul Rashid Dostum – a powerful northern warlord in the 1990s and founder of the Jombesh party, National Islamic Movement of Afghanistan – “was asked by Ghani to apologise for his past crimes, and this is something revolutionary,” Mir Ahmad Joyenda, former parliamentarian and now deputy director of the Afghanistan Research and Evaluation Unit, an NGO based in Kabul, tells IPS.

Joyenda say ethnicities still play a role in the Afghan political landscape but believes that things are changing. “In the past 12 years we have seen changes, mostly in the main cities. There are people – especially the young – who are interested in voting for a candidate offering effective programmes.”

Rafiee of the Afghan Civil Society Forum Organisation agrees. “We can say that Afghans are acting more politically compared to the 2005 and 2009 elections. People will not vote 100 percent along ethnic lines. What is more important is that the people – particularly the civil society – have pushed the candidates to present articulated platforms.”

The next Afghan president will be elected mostly on the ethnic balance of the vote “but ethnic/religious walls are going to be slowly demolished,” says Zazai of Mediothek Afghanistan.