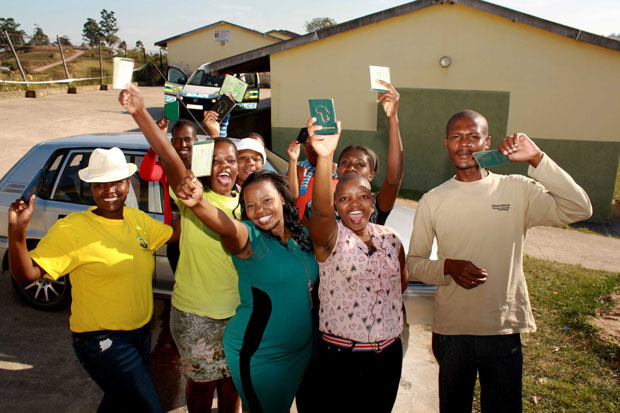 South Africa’s ‘born frees’, children born after the country’s 1994 elections, make their way to vote for the first time in the community of Mabheleni in Kwazulu-Natal. Credit: GCIS/CC by 2.0

CAPE TOWN, May 15 2014 (IPS) - On Tuesday international ratings agency, Moody’s, rated South Africa a credit positive, saying that the results of last week’s general election ensured a continuity of the country’s macroeconomic policy. But the success of the left-wing Economic Freedom Fighters (EFF) tells a different story of the country’s economic inequalities.

Often seen in a trademark red beret, the EFF’s founder Julius Malema has emerged as a left-wing revolutionary, promising the nationalisation of mines and banks, expropriation of land to black South Africans, job creation through protected industrial development, and free education, healthcare, housing and sanitation.

At only eight months old, the EFF were able to secure 25 seats in parliament, ranking third overall with about 1.2 million votes in the May 7 general election.

Malema is a former  African National Congress (ANC) Youth League leader who was expelled from its ranks in 2012 amid accusations of hate speech against white South Africans, causing division with the party, money laundering, fraud, racketeering and tax evasion.

South Africa’s government adopted the National Development Plan in 2012, which was meant to be a blueprint for economic development. According to a report by tralac, an organisation developing trade-related capacity, the plan “has become the cornerstone of the government’s policy in addressing objectives such as increasing employment, reducing poverty and inequality …”

However, an ongoing strike by the Association of Mineworkers and Construction Union members, has highlighted the income disparity on South Africa’s mines. The strike for higher wages has been characterised by violence, intimidation and killings. Tensions were visible at Lonmin’s North West platinum mine this week as miners wielding traditional weapons reportedly barricaded roads to prevent fellow strikes from returning to work. On Thursday, local media reported that many of the miners appeared to be apparent EFF supporters as they were dressed in T-shirts emblazoned with Malema’s face.

But Malema’s EFF is a platform that appeals to those falling through the cracks under the current system, says Professor Adam Habib, a political scientist from Johannesburg’s University of the Witwatersrand.

“Malema tapped into a niche constituency of disgruntled ANC voters, young people struggling to get jobs and workers battling to make ends meet,” he tells IPS.

But Habib argues the EFF’s respectable showing was little more than a protest vote in many cases.

“Many citizens do not take Malema seriously. EFF voters do not vote for him because they think he’s a credible president; they vote for him to spite the ANC, and to send a message to the ruling political elite.”

The ruling ANC could face some serious trouble if the party fails to look forward — and inward.

Jacob Zuma’s ruling party has been marred by scandal and crippled by its failure to deliver on many of its promises.

It’s left many — the young, poor, marginalised and long-time ANC supporters — deeply dissatisfied and disillusioned. Many didn’t vote, or defected from the ANC to parties that are vocal in offering radical change.

Habib says if the ANC hopes to regain trust and mobilise the millions of young “born frees” who have grown up in an age of democracy, politicians will need to stress its commitment to the future rather than its part in overthrowing the old apartheid regime.

“We have to appeal to them and their interests,” Habib says of the untapped youth electorate.

“The vast majority of them are poor and marginalised. A party has to have a message that provides them with a future … a message of inclusion, of addressing inequality, and of providing people with a job and a decent living standard — but it must also be a message of modernity, of being citizens of the 21st century,” he says.

“Until they do, they will not galvanise this generation.” 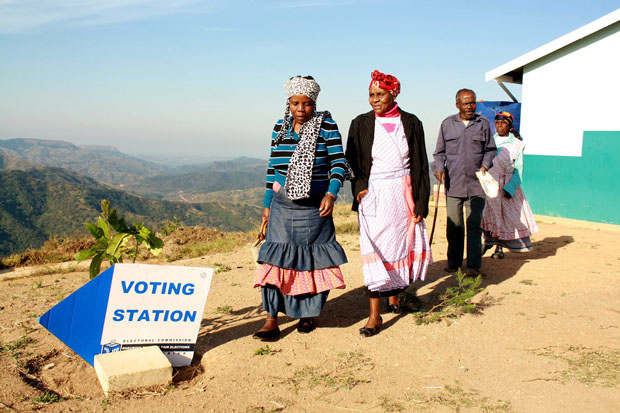 The community of Mabheleni in Kwazulu-Natal, South Africa, make their way to vote on May 7, 2014, after 20 years of democracy. Credit: GCIS/CC by 2.0

Banking on its apartheid struggle credentials and the legacy of former president Nelson Mandela, the ANC has been the preferred party of much of the electorate since the beginnings of democracy in 1994.

It clinched 62 percent of the vote but lost key ground in former ANC strongholds such as Gauteng province.

It’s time politicians looked long and hard at their current behaviour, argues Habib, since support for the ANC is at a historical low.

This complacency was no more apparent than during the lead up to elections, when Zuma was quoted as saying only the “clever” middle classes cared about the scandals surrounding multi-million dollar “security upgrades” to his Nkandla retirement homestead.

Habib calls the 2014 elections a mere “curtain raiser for the real game” for what’s to come in five years. It’s a sentiment reflected by political commentators like Professor Steven Friedman, who acts as director of the Centre for the Study of Democracy at Rhodes University and the University of Johannesburg.

“The ANC acknowledged that many of its supporters were unhappy with leaders who … seemed more interested in looking after themselves than voters,” Friedman says, adding the party has lost key support among unionists at the Congress of South African Trade Unions and its once-energetic youth league.

“This election did not challenge the ANC’s dominance at the polls. But if the result convinces its leaders that they no longer have to worry about the problems caused by politicians who put themselves before the country, it may open the way for far more competition in the next election than we have seen in this one,” Friedman tells IPS.