JOHANNESBURG, Mar 7 2014 (IPS) - When Phumzile Khoza* came to the central Johannesburg antenatal clinic on a chilly day in August 2013, she was feeling on edge. Not about the medical procedures – she already had two children – but about talking to the nurse. 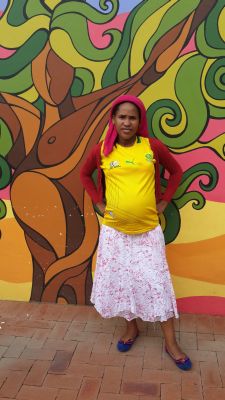 This was her third pregnancy living with HIV, but the first with a new partner from whom she had been hiding her status for the past two years.

This pregnancy had been rocky from the start. Khoza had been trying to convince her partner to join her for HIV testing, but he refused. Without couples’ counseling, Khoza was afraid to disclose, and it was becoming harder to take and hide her daily medication of antiretrovirals (ARV).

Khoza’s partner was now regularly slapping her, punching her stomach, and kicking her during arguments.  Khoza feared it would get worse if he learned she was HIV-positive.

Although she wanted help, Khoza imagined the nurses would not have time to talk through her complex situation. Plus, she had seen how angry the nurses became with women who defaulted on ARV treatment.

Khoza’s story is increasingly common. An estimated one in four South African women experience intimate partner violence in the 12 months leading up to childbirth.

Violence in pregnancy is associated with pregnancy loss, miscarriage and neonatal death, higher rates of postpartum depression and poor health gains for infants.

In a systematic review of the literature, Dr Simukai Shamu, a Medical Research Council expert on violence, found that prevalence of violence among pregnant women in Africa is among the highest reported globally, and that a major risk factor for violence is HIV infection.

“Because most studies are cross-sectional, it’s difficult to tell whether violence was a result of demands or changes in life due to pregnancy, or if the pregnancy was the outcome of violence,” Shamu told IPS.

Since early 2013, a team from Wits Reproductive Health and HIV Institute (Wits RHI) has been interviewing women living with violence in Johannesburg.

Lead researcher Nataly Woollett said that many women described pregnancy as a time of greater violence.

“Partly because they had to disclose their HIV status and partly because men use the woman’s antenatal visit –where testing is virtually mandatory – as a proxy for their own HIV status, so they are curious about the results,” she told IPS.

At the same clinic, IPS met Martha Ramphele*, who described the rapid escalation of violence that landed her in hospital while six-months pregnant: “He started telling me that I’m a fool and stupid. And then he strangled me and let his cousin beat me up.”

Ramphele reported the incident to the police, but later withdrew the charges to protect her safety and financial security. She suspected her HIV disclosure led to physical abuse, but she couldn’t be sure.

No one can say precisely what triggers violence, but often the blend of stress associated with pregnancy, the shifting power and control dynamics, coupled with a new HIV diagnosis, are enough to heighten conflict.

Violence in pregnancy impacts negatively on the health of HIV positive women.

Sister Marieta Booysen, a senior nurse with the Aurum Institute, a research organisation in Johannesburg, explained that pregnant women in violent relationships are the most likely to quit treatment: “When you tell a patient she is HIV-positive but she is scared to disclose to her partner, it is that very same patient who will default on her medication later.”

The Wits RHI team found that most antenatal nurses interviewed recognised that violence hurts adherence to ARV treatment but few know how to deal with the issue.

The poor health care response can partly be attributed to the lack of training but it may also reflect the fact that many nurses suffer violence at home and are afraid to respond.

Dr Nicola Christofides, an expert on both violence and HIV based at Wits University, explained that “nurses who experience violence in their own lives […] are either very sensitive to the issue of violence in their patients’ lives and very receptive, or the opposite, where they are actually in denial and shut down.”

IPS talked to Khoza at the antenatal clinic five months after she had first met a Wits RHI nurse of the Safe & Sound project, which identifies violence in pregnancy and provides one-on-one counseling and referrals in three antenatal clinics in Johannesburg.

The nurse referred Khoza to the nearest hospital offering psychological care and counseling.  “It is nice to talk about the difficult things if you have someone who understands the situation and gives you clues,” Khoza said.

Khoza had never spoken about the violence in her life until the antenatal visits. A few months later, she separated from the abusive partner and is finding ways to support her children.

“I still have stress but I don’t put that in my heart. I just tell myself everything is going to work out all right even though it is difficult,” Khoza said.

* Name changed to protect her safety.