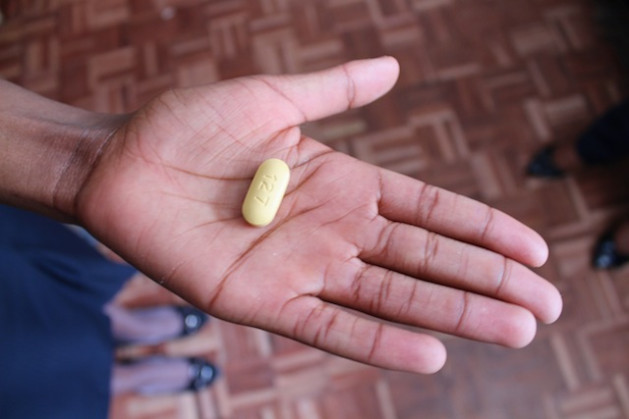 With a new generation of HIV treatments available, mothers on Option B+ need only take one pill per day. Credit: Jennifer McKellar/IPS

KAMPALA, Nov 27 2013 (IPS) - Uganda has gotten plenty of kudos and some criticism over its roll out of the new antiretroviral therapy for pregnant women and their babies, known as Option B +.

Recommended by the World Health Organisation in June 2012, Option B+ consists in life-long provision of ARV therapy to pregnant women regardless of their CD4 count. CD4s, or helper cells, fight infections in the body.

Before, under Options A and B, mother and baby were given ARVs during pregnancy and breastfeeding. Only women with CD4 counts under 350 were prescribed ARVs for life – but CD4-counting machines are expensive and scarce in Africa.

Uganda has done remarkably well. Over 70 percent of all health facilities offer Option B+ and it overshot its target of 35,000 women on treatment in the first year, reaching 50,000 by October 2013.

“We are overwhelmed by the roll out so far,” said Godfrey Esiru, national coordinator of prevention of mother-to-child transmission (PMTCT) at the Ministry of Health. “It is the cheapest option for a country with limited resources for the health sector.”

Uganda’s seroprevalence is seven percent, or some 1.5 million people, according to the Joint United Nations Programme on HIV/AIDS (UNAIDS).

AIDS activists welcomed the roll out but voiced some concerns.

“Option B+ denies a pregnant woman the right to decide whether to join the service or not,” said Dorothy Namutamba of the International Community of Women Living with HIV/AIDs in Eastern Africa (ICWEA).

This criticism featured prominently in the focus groups organised by ICWEA in 2012 to discuss the experiences of women with Option B+ in Uganda and Malawi.

“The names Option A, B and B+ imply that pregnant women who test positive for HIV are being given a range of options to choose from, whereas in reality it is the government that chooses which option to implement,” reads the ICWEA report on the focus groups.

Young HIV positive women may not want to start lifelong ARV treatment when they still feel healthy, although the regime is simplified to one pill a day. Over time, about two out of 10 people on treatment develop resistance to ARVs and must switch to more expensive second or third-line drugs.

Activist Mulani Birimumaso and his wife have lived with HIV for 15 years. Their two daughters are HIV negative thanks to PMTCT services available in Uganda since 2001.

He worries about couples sharing the pills at home. “They have initiated Option B+ without considering that there are other HIV positive people in homes other than mothers,” he told IPS. “The husbands also need those drugs.”

The focus groups noted the risk of domestic violence arising from the inequity in treatment access for husbands.

Proscovia Ayo, of the Tororo Forum of People Living with HIV Networks in eastern Uganda, points out that the roll out has ignored the need for family planning as part of PMTCT.

“You find a mother delivering every two years, yet she is on ARV treatment. We thought Option B+ would resolve that, but it has not,” she said.

Some critics say that Option B+ could be a potential incentive to get pregnant and gain access to the three-drugs-in-one-pill daily treatment.

Shafik Malende, a researcher in a study on implementation of Option B+ in northern Gulu district, found it requires strong family cooperation.

“Engagement of communities would greatly enhance Option B+ because they would ensure adherence and follow up,” said Malende.

A study at Mulago National Referrral Hospital in Kampala in late 2012 found that out of 190 women on Option B+, only 20 percent picked up their CD4 count results.

These concerns are being addressed as the program is implemented across the country, Godfrey Esiru told IPS. Now, each clinic is getting a cellphone to track mothers on treatment.

He admitted some weaknesses in male involvement, but added that increased use of village health teams and peer mothers groups will encourage men to support their wives.

One advantage of Option B+ is that HIV positive pregnant women are put on treatment without a CD4 count.  “We could not move this fast with the other options because we don’t have enough CD4 machines,” Esiru explained.

Yet, looking beyond birth, women on treatment will need regular CD4 counts and viral load tests to monitor their health. Activist Augustine Sebuma, who has lived with HIV for 20 years, wondered how health workers will monitor mothers on Option B+ when their clinics lack CD4 counting machines.

“We strongly support Option B+,” reads a statement by ICWEA. “But we are gravely concerned … about two major early challenges, loss to follow-up and weak engagement of communities, which will lead to weak demand for this service.”