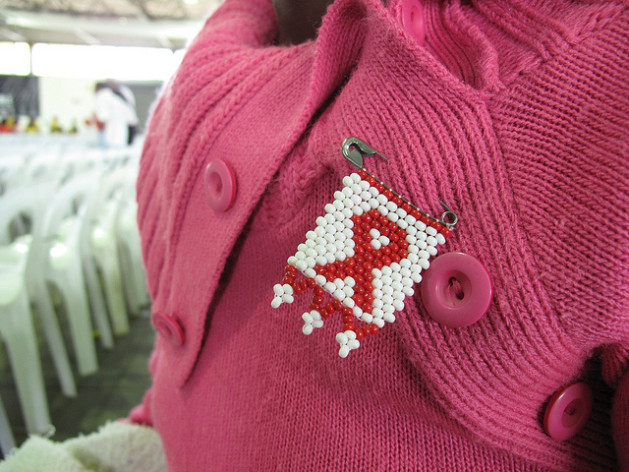 Cameroon has shown only a moderate decline in new HIV infections, according to the Joint United Nations Programme on HIV/AIDS. Credit: Nastasya Tay/IPS

YAOUNDÉ, Oct 29 2013 (IPS) - With a wide smile Beatrice M.* says that she lives by the motto “life is short and beautiful — live it to the full.” The 20-year-old, HIV-positive mother refuses to be defeated by her new circumstances.

Beatrice, a second year anthropology student at the University of Yaounde I, found out she was pregnant and HIV-positive when she was 18.

“When the doctor broke the news, I thought my life was over. But my gynaecologist put me on Zidolan [an anti-retroviral treatment] to prevent mother-to-child infection and told me things would be fine,” she tells IPS. Her doctor was right and her now two-year-old daughter is HIV-negative.

Fast Facts about HIV in Cameroon

Looking into the distance, with her hands crossed on her lap, she recalls: “The pregnancy was not wanted. My boyfriend asked me to have an abortion, but I refused. When I told him about my HIV status, he said he had gone for testing and was HIV-negative. Then he left me.” She was five months pregnant at the time.

Beatrice believes that her 25-year-old boyfriend — a fellow student at the same university — infected her. She says that she was a virgin when they met.

According to Flavien Ndonko, an anthropologist at the German International Cooperation Agency or GIZ, an alarming 20 to 30 percent of Cameroonian girls aged 15 to 24 years have unwanted pregnancies.

The 2013 Joint United Nations Programme on HIV/AIDS (UNAIDS) report on the global AIDS epidemic states that around 600,000 people or 4.2 percent of Cameroon’s population of 19 million are HIV-positive. Women and youth are the worst affected groups. This West African nation is among UNAIDS’ 20 priority countries on the continent, and has shown only a moderate decline in new infections.

Beatrice learned about these statistics after finding out her status. “During our relationship, we never thought of contraception or AIDS. I had heard of them, but I didn’t feel they had anything to do with me.” During high school, she had not been interested in attending the Education for Life and Love (ELL) programmes, a life skills course given in high schools across the country.

Social worker Arlette Ngon says that the country needs a new approach to raising awareness. “Apart from science courses, the ELL programme is the only time when sexually transmitted infections and AIDS are discussed in depth at school. The message doesn’t seem to getting through to the youth.”

Yvonne Oku, from the National Network of Aunties’ Associations (RENATA), believes that much more should be done to bring down the rate of new infections. RENATA, a non-governmental organisation, educates youth on how to prevent teenage pregnancy and HIV through “aunties,” who are young mothers trained in health matters.

Aubin Ondoa, an anthropologist, explains to IPS that the major risk factor for young girls is early sexual activity combined with a glaring lack of information. According to the U.N. Population Fund, the average age of the first sexual encounter in Cameroon is 15.8 years, while one out of three girls aged 20 to 24 years is a mother before the age of 18.

“Furthermore, young girls are prime targets for older men who give them money,” Ondoa adds.

For many ill-informed young women with little or no income, the consequences of unprotected sex are pregnancy and HIV.

Beatrice now uses condoms with her partner. She is in a relationship with a high school teacher who is HIV-negative, knows her status and wants to marry her. But she has refused, fearing that she may infect him. She worries that if they get married they will no longer use condoms.

Positive Generation — an anti-AIDS organisation created in 1998, which has 60 members who are mostly students — has been a source of support for Beatrice. The group has helped her to come to terms with living with HIV.

The young woman has decided to keep her status a secret. “My parents are not ready; I prefer to leave them in the dark. I am afraid of the stigma,” she says.

Because she lives with her two sisters, she has to be very secretive so they do not discover her status. “I am very discreet. It would be difficult if someone found out that I take medicine at specific times,” she confides.

She even brings her child, who lives with her parents in a village in the west of the country, all the way to the capital Yaoundé for medical check ups. In the village, she says, “there is no such thing as medical confidentiality.”

In Cameroon, antiretroviral medication is free; she only has to pay for the bi-annual blood count and CD4 tests, which cost about 34 dollars. “It would be difficult if I had to pay for everything,” she says. Patients in remote areas are not as lucky. They often have to travel 44 km on foot, through a forest, to get to a healthcare centre.

Beatrice is proud of her little girl and would like to have more children, but she wishes that healthcare staff had a more professional attitude.

“I tore during childbirth, but the midwife refused to suture me. She also refused to take my child for routine tests,” says with tears in her eyes.

For her, this behaviour is nothing more than a form of stigmatisation and is one thing she does not need in her quest to live her life to the full.