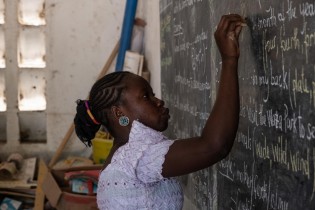 By Tharanga Yakupitiyage
The United Nations must act to prevent further devastation from the escalating crisis in Cameroon, human rights groups said.

By El Mahdi Hannane
Seven years ago, when Cameroon began experiencing inter-regional conflict, Armand Loughy, a 55-year old Cameroonian psychiatrist, strapped her youngest child on her back and with her five other children embarked on the dangerous Journey from Cameroon towards Rabat, Morocco’s capital. They fled the deteriorating security situation in Cameroon, looking for a better life.

By Monde Kingsley Nfor
In Cameroon's Northwest Region, Judith Muma walks 9km from her home to her 300-square-metre farm. The vegetables she grows here are flourishing thanks to the money she has borrowed from her njangi (thrift group) and a local credit union to finance a small artisanal irrigation scheme.
Next Page »
ADVERTISEMENT ADVERTISEMENT