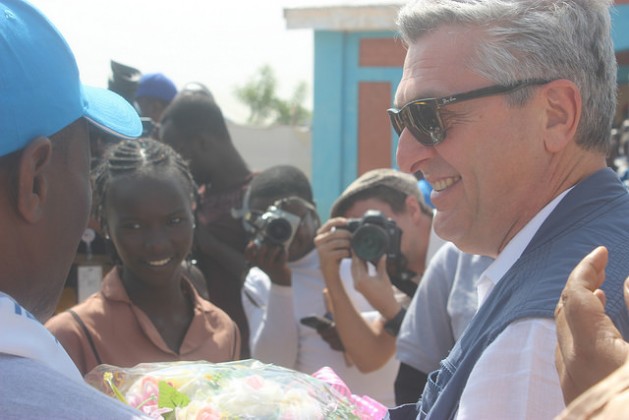 UNHCR chief Filippo Grandi is received at the Minawao Camp in Cameroon’s Far North region on Dec. 15, 2016, where some 60,000 refugees have fled attacks by Boko Haram. Credit: Mbom Sixtus/IPS

“It was on May 24, 2013. My husband was sleeping in his room while I was on the other side of the house with our six children. The youngest was only one month old,” she mutters, pausing to collect herself.

The funding gap for refugees and IDPs in Cameroon now stands at 62.4 million dollars.

Njoya told IPS when the armed insurgents broke into the house, they grabbed her husband and dragged him into her room. “They brought him in front of us and put a machete to his neck and asked him if he was going to convert from Christianity to Islam. They asked thrice, and thrice he refused. Then they slew him right in front of me and our children,” she said, still holding back tears.

The widowed refugee said an argument ensued among the assailants as to whether to spare her life or not. They finally agreed to let her live. The next day she escaped with her children to the hills and trekked for several days until they reached the border with Cameroon, where the UNHCR had vehicles to transport refugees to the camp. The camp had just been set up, she says.

Njoya, now 36, has been living in the Minawao refugee camp in Cameroon’s Far North region for more than three and a half years now, with scant hope of returning anytime soon.

IPS spoke with Njoya and others during the Dec. 15 visit of Filippo Grandi, High Commissioner for the United Nations Refugee agency UNHCR, to the camp. Grandi called for the financial empowerment of Nigerian refugees to help them cope with insufficient humanitarian aid.

The camp hosts about 60,000 Nigerians who have fled their homes since 2011 because of attacks carried out by the Islamist terror group, Boko Haram.

Grandi spoke with refugees, representatives of national and international NGOs, and officials of the Cameroonian government who gathered to welcome him. Cameroon is the third country he is visiting as part of his tour of countries of the Lake Chad Basin affected by the Boko Haram insurgency.

Grandi said his visit was intended to encourage donors to provide more aid to affected countries and governments to work together to reinstate peace in the region and facilitate the return of refugees and internally displaced persons (IDPs) their homes.

“We have made efforts to improve aid, but aid is still insufficient. I have listened to complaints of these refugee women who say they do not have any income generation activities and I think the UNHCR and its partners should begin working in that direction. Help them help themselves,” he said.

He had just listened to representatives of the refugees and refugee women discussing the difficulties they face on a daily basis, including food and water shortages, scarcity of wood, insufficient medicines, and insufficient classroom and medical staff in health units in the camp.

According to Njoya, and every other refugee who talked to IPS, including Jallo Mohamed, Bulama Adam and Ayuba Fudama, living conditions are growing worse by the day. They all complain of joblessness. Njoya says even when they leave the camp with refugee certificates as IDs, Cameroonian security officers still stop them from going out.

“This hinders the success of the income generation activities we are yearning for,” she said.

Reports say there are periods when as many as 50 births are recorded per week in the Minawao camp.

“You can’t blame them. They sleep early every night because they do not have TV sets or other forms of entertainment. That is why the birth rate is as it is,” said a medic at the camp who asked not to be named.

Cameroon currently hosts more than 259,000 refugees from the Central African Republic and 73,747 Nigerians. Funders led by the U.S., Japan, EU, Spain, Italy, France and Korea were able to raise only 37 per cent of a total of 98.6million dollars required in assistance for refugees and IDPs in Cameroon this year – a funding gap of 62.4 million dollars, according to the UNHCR factsheet.

The funding gap for requirements of Nigerian refugees, according to the UNHCR, stands at 29.7 million dollars. Nevertheless, High Commissioner Grandi remains positive that empowering refugees to earn incomes will improve living standards at the Minawao Camp.

Regarding the wood shortage, he said he saw fuel-efficient cooking stoves in Niger and Chad and will encourage stakeholders in Cameroon to introduce the models in the camp. He also reassured refugees that an ongoing water project will provide the camp and host communities with clean pipe-borne water.

The High Commissioner’s mission to Cameroon also includes the launching of 2017 Regional Refugee Response Plan for the Nigeria Refugee Situation.