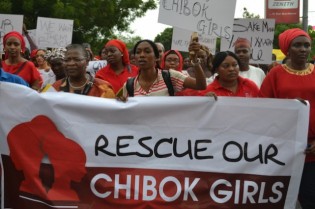 By Jo Becker
“Khadija” was just 8 years old when Boko Haram fighters attacked her village in northeast Nigeria and took her by force to their camp. Her abductors tried to marry her and other captives to members of the armed Islamist group, she told me. When the captives refused, they were locked in a room.

Close to a Thousand Nigerian Girls Freed, Many Malnourished or Pregnant

By Lisa Vives
Boko Haram, fleeing to a new hideout, has abandoned hundreds of women and girls in the Sambisa forest where the high school girls from Chibok were initially taken over one year ago. It is not certain, however, that the freed girls and women were part of the 200 plus kidnapped victims of Boko Haram, officials say.

By Ngala Killian Chimtom
Motari Hamissou used to get along well with his pupils at the government primary school in Sabga, an area in Bamenda, the capital of Cameroon’s North West Region. In the past, Hamissou also lived in peace with his neighbours. No one was bothered by his long, thick beard or the veil his wife, Aisha Hamissou, wore, or the religion they followed.
Next Page »
ADVERTISEMENT ADVERTISEMENT