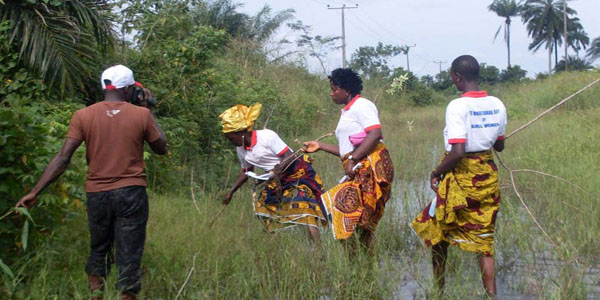 Flooding in Nigerian villages is just one of the effects of climate change that the country will have to address in drawing up its “intended nationally determined contributions” (INDCs) for the U.N. Climate Conference in Paris in December: Credit: Courtesy of NDWPD, 2011

LAGOS, Aug 2 2015 (IPS) - Nigeria seems in no haste to unveil its climate pledge with just four months to go before the U.N. Climate Conference scheduled for December in Paris.

However, unlike Gabon, Morocco, Ethiopia and Kenya – the only African nations yet to submit their commitments – Nigeria has just commissioned a committee of experts to draw up targets and responses for its “intended nationally determined contributions” (INDCs).

INDCS are the post-2020 climate actions that countries say they will take under a new international agreement to be reached at the U.N. Framework Convention on Climate Change (UNFCCC) Conference of the Parties (COP21) in Paris, and to be submitted to the United Nations by September.

"The whole exercise [of preparing INDCs] will consider some priority sectors, look at the baseline and look at our needs for development and see what we can put on the table that we are going to strive to mitigate in terms of greenhouse gases” – Samuel Adejuwon, Nigeria’s Federal Ministry of Environment

Ahead of that date, Nigeria says its goals are clear: balancing post-2020 greenhouse gas (GHG) emission cut projections with its development peculiarities, according to Samuel Adejuwon, deputy director of the Federal Ministry of Environment’s Department of Climate Change in Abuja.

Nigeria is Africa’s fourth largest emitter of CO2, and there is no doubt climate change is already a problem it faces.

From the north, encroachment of the Sahara is helping to fuel a bloody insurgency by the jihadist group Boko Haram, as well as resource conflict between farmers and pastoralists in its central region, while the rise in ocean levels and flooding are affecting the south.

In a report issued in October 2014, the Mapelcroft global analytics company said that Nigeria, along with Bangladesh, Ethiopia, India and the Philippines, were the countries facing the greatest risk of climate change-fuelled conflict today.

Nigeria’s hopes for slashing its emission levels as part of its INDCs face several tests.

One is that for an economy almost solely dependent on oil – which accounts for a major portion of its 500 billion dollar gross domestic product (GDP), Africa’s highest – the commitment it takes to Paris will reflect how jettisoning fossil fuel cannot be an urgent priority and why doing so will require significant time and resources.

“The whole exercise will consider some priority sectors, look at the baseline and look at our needs for development and see what we can put on the table that we are going to strive to mitigate in terms of greenhouse gases,” says Adejuwon.

Another test is Nigeria’s energy shortage. The country produces about 4,000 megawatts for 170 million people, leaving much of the population reliant on wood, charcoal and waste to fulfil household energy needs such as cooking, heating and lighting.

In 2014, Nigerians used at least 12 million litres of diesel and petrol every day to drive back-up generators, according to former power Minister Chinedu Nebo. The country’s daily petrol consumption (cars included) stands at about 40 million litres, according to the state oil company, Nigerian National Petroleum Corporation.

Cutting the level of pollution that this consumption causes will require big investments in renewable and cleaner energy, says Professor Olukayode Oladipo, a climate change expert and one of three consultants drawing up the INDCs for the government.

Oladipo argues that the key to the issue lies in striking a balance between a future of lower greenhouse emissions and immediate developmental realities.

“Every country is now exploring how to use less energy … in an efficient manner, how to rely on renewable energy sources.” In Nigeria, we are looking at “how to be able to drive our economy through reduced energy consumption without actually reducing the rate at which our economy is growing.”

Last year, minister of power Chinedu Nebo said that while solar panels were welcome for use in shoring up generation in distant communities, the government will deploy coal in addition to the hydro power currently in use.

“There is no doubt that the potential is there. Clean coal technology can give us good electricity and minimum pollution at the same time,” he said.

Oladipo also stresses that besides fuel, Nigeria’s climate plans will focus on agriculture, partly to diversify from oil and also as a response to growing resource conflict.

“We are not saying it is the only determinant of crisis,” he says of climate change stoking conflict over resources, “but at least it is adding to the degree and the frequency of the occurrence of these conflicts.

Apart from Boko Haram activities in the north which have been responsible for at least 20,000 deaths, clashes between pastoralists and farmers over land has killed thousands in Nigeria’s central region in recent years.

In the latest attack in May this year, herdsmen from the Fulani tribe slaughtered at least 96 people in the central state of Benue, Nigeria’s Punch newspaper reported.

The government agrees that climate change is one of the causes of the frequent bloodletting, alongside factors like urbanisation, but not much has been done to address the problem.

Oladipo says he believes that Nigeria’s new leader, Muhammadu Buhari, will do more to address fundamental climate change issues, point out that in his inaugural address on May 29, Buhari pledged to be a more “forceful and constructive player in the global fight against climate change.”

However, Nnimmo Bassey of the Health of Mother Earth Foundation argues that proposals put forward by Nigeria and Africa can barely be achieved if the developed nations – the biggest polluters – fail to act more to meet their commitments and cut down on their emissions.

“Nigeria should insist that industrialised nations cut emissions at source and not place the burden on vulnerable nations,” says Bassey.

Urging action from those nations, including the United States, will form a key element of Nigerian and African INDCs, adds Oladipo.