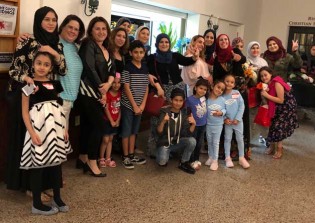 By Rose Delaney
South Florida has long been known as a haven for refugees and migrants. Widely referred to as the “gateway to Latin America”, 1 in every 5 Florida residents is an immigrant. Significantly, the “sunshine state” welcomes 1,000 new settlers every day.

By Rose Delaney
Inaccessible justice and socio-economic inequality act as core components of the United States criminal justice system. Thousands of individuals are denied their basic human rights and treated as a criminal “underclass” in what appears to be a perfectly “legal” and “just” system.

By Rose Delaney
With terror attacks on the increase worldwide, there are more people today who believe that it has something to do with the religion of Islam.

By Rose Delaney
As Human Rights Day approaches Dec. 10, it offers a moment to pause and look back at the roots of the global development process as a platform for stepping forward. On this day 30 years ago, the international community made a commitment to eliminate all obstacles to equality and inclusivity.

By Dominique Von Rohr and Rose Delaney
Rome ..... Termini station, 2:00 pm on a Tuesday afternoon. Five young boys are standing next to the escalators, constantly shifting, dispersing, meeting up again. They are laughing, typing on their phones, chatting, smoking. They seem like average teenagers with fancy hairstyles and smart clothes. But every once in a while, they nervously glance over to the security personnel circling Termini station. Or carefully examine older men walking by.

Muslims in Europe: Can There Be Social Harmony ?

By Rose Delaney
Although 20 million Muslims reside in Western Europe, establishing social harmony between the Muslim community and their European counterparts has proved exceedingly challenging.Much to the dismay of international humanitarian agencies and anti-racism activists,the language of exclusion and prejudice persists.

By Rose Delaney
A recent research study “Bangladesh: Looking Beyond Garments” conducted by the Asian Development Bank ADB has revealed that the positive economic turnaround in Bangladesh is largely due the rising presence of women in the workplace.

By Dominique Von Rohr and Rose Delaney
Hardly a street can be found in Rome without a Bangladeshi-run mini-market. Much like the typical Italian coffee bars, they have now become an intrinsic part of Roman infrastructure.

By Rose Delaney
As unrest and chaos plague Yemen, the U.A.E is not waiting in silence. Recognising that in spite of being impoverished Yemen has always been strategically important for U.A.E and the region, the warfare and conflict will not only gravely affect the region itself but could also obstruct the future security of the Middle East as a whole.

By Rose Delaney
In Yemen, conflict, violence, and bloodshed are now a daily occurrence. In spite of ongoing human rights violations global media outlets have chosen to take a back seat and remain silent. Why has  the grave severity of Yemen’s rising conflict been kept in the shadows rather than exposed  as a recurrent headline?

By Rose Delaney
At 3.36am on  August 24, a 6.2 magnitude earthquake wreaked havoc and destruction in central Italy.

By Rose Delaney
In today’s “Post-Feminist” world, it is time to pose a fundamental question. If we are really raking in the liberating outcomes of a “gender-just” 21st century, why do the vast majority of young girls and women, the world over, continuously refuse to speak out in the face of verbal, sexual and physical harassment on public transport?

By Rose Delaney
As Iran currently executes the highest number of juvenile offenders in the world, hundreds of Iranian minors helplessly watch their childhoods pass them by as they await their fatal ends behind bars.

By Rose Delaney
For the first time ever, a team of displaced athletes will have their chance to demonstrate their relentless determination and integrity in a bid to leave their own distinct mark on Olympic history.
Next Page »
ADVERTISEMENT ADVERTISEMENT