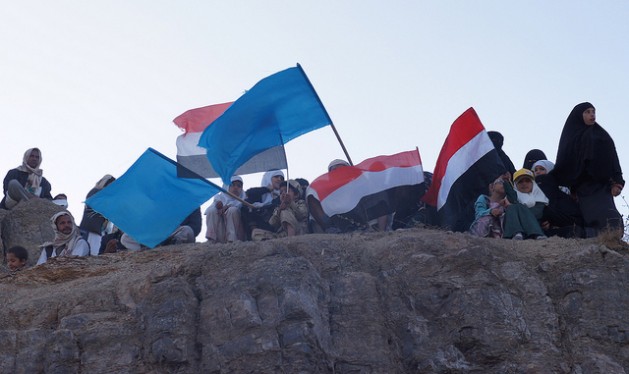 ROME, Sep 2 2016 (IPS) - In Yemen, conflict, violence, and bloodshed are now a daily occurrence. In spite of ongoing human rights violations global media outlets have chosen to take a back seat and remain silent. Why has  the grave severity of Yemen’s rising conflict been kept in the shadows rather than exposed  as a recurrent headline?

If Western media outlets possess the power to shed light on injustice and ultimately aid in the eradication of warfare and conflict, why has Yemen’s crisis not been considered an issue worthy of international attention?

It is time to  question the “strategic” silence.

Is the dark veil drawn over Yemen’s struggle in the face of violent extremist groups a strategic manoeuvring on the West’s part? Does the Occidental world play a hidden role in this conflict? Would international superpowers much rather skim over the truth and dismiss the sheer horror of bombings and casualties as a means of protecting their own “favourable” global position?

The sheer gravity of Yemen’s conflict should subsequently ignite  a deafening  global cry for  justice, however, as long as the public are “strategically” kept  in the dark, little change can realistically be implemented.

The stifled cries of Yemen’s  grief-stricken will remain unheard. The unrest which plagues Yemen today was triggered by the Houthi takeover of Sana’a in 2014. This was later followed by the coalition airstrikes  led
by Saudi Arabia in March 2015.

Destructive bombing worsened by perilous ground fighting have taken a devastating toll on the civilian population. Particularly in the case of Yemen’s vulnerable children who are continuously subjected to life-threatening human rights violations.

In an so-called  effort to eradicate the threat “Houthi” extremist rebels pose, a coalition of Arab states led by Saudi Arabia and militarily supported by the United States and the United Kingdom have waged war against Houthi rebel forces in a bid to”protect” Yemen and its people.

In reality, it appears the atrocity and devastation these unlawful airstrikes have inflicted on the people of Yemen has resulted in exactly the opposite. The Saudi-Led coalition’s definition of  “protection” has  led to nothing short of an  outbreak of chaotic destruction.

Impoverished families have enlisted their children with Houthi or pro-government forces in exchange for the equivalent of 7-15 USD per day.
The outcomes of ruthless warfare have proved detrimental to the future educational, economic and societal development of Yemen.

More than 6,500  people have died and 2.5 million have been displaced. As  one of the world’s poorest countries well before the conflict ensued, Yemen now not only faces the setbacks of poverty-stricken deprivation but the fearful strife of bloodshed  too.

The New York Times has stated that the US has actually been complicit in the carnage of Yemen, having sold over USD 20 billion in weapons over the course of 2015.

Since the beginning of Yemen’s downfall, the United Kingdom has not acted as the innocent bystander it wishes to portray to the public eye, with the sale of close to USD 4 billion worth of weapons to Saudi Arabia.

As the US and the UK continue to sell weapons to the Saudi-led coalition and  ongoing bombings, killings, and corruption ceases to discontinue, Yemen’s Children are left scarred by the threats of exploitation and violence.

UNICEF has verified that more than 900 children were killed and 1,300 injured in 2015 alone, with a rate of 6 children killed or maimed every day since the escalation of hostilities in March 2015.

What’s more, Houthi forces, pro-government forces, and extremist groups continue to engage in the recruitment of child soldiers, who are estimated to make up one-third of the fighters in Yemen.

The UN documented up to 850 cases of child recruitment in 2015, a five-fold increase over 2014. These armed parties have also detained children who upheld suspected loyalty to enemy forces. They relentlessly  abuse their child prisoners and subject them to inhumane conditions whilst in captivity.

According to Human Rights Watch, of the 140 detained by southern armed groups, 25 of the victims were children under the age of 15.

For those who fear the threat of violence or captivity, a clear alternative shines through  the enticing employment prospects of fighting for Houthi Forces.

Many young boys are  lured in by the promise of safety, security and most significantly, economic prosperity. Economic hardship is, in fact, one of the fundamental pull factors in the process of child soldier recruitment Al Jazeera confirms. A vast number of impoverished families have enlisted their children with Houthi or pro-government forces in exchange for the equivalent of  7-15 USD per day.

“There are many families in several provinces that deliberately send their children to fight for the sake of money, after these families lost their source of income at the beginning of the war.”Amal al-Shami, the head of the Sanaa-based Democracy School, a non-profit organisation to raise awareness in human rights and democracy among children, explained to Al Jazeera.

Khalil, a former construction worker from Taiz has been unable to find secure employment due to the war. In a state of financial desperation,  he urged his 15-year-old son to join the houthi forces.   “I am not a supporter  of the Houthis, but I sent my eldest son to fight with them. They pay him 9.30 USD daily, and this is enough for us.” he stated. The necessity to join rebel forces is further accentuated by the widespread demolition of schools.

In many cases, with the destruction of their sole source of education these children and their families see no other
alternative than to engage in the warfare.

In many ways, Yemen has consequently developed into a new breeding ground for child soldiers.

“The conflict has become ingrained and inter-generational. You’re seeing the cycle continue. Children are being killed because they are being seen as future fighters. Kids are being brought up to hate.” Anthony Nolan, a UNICEF child protection specialist  emphasised.

UNICEF has released a report stating that children as young as 14 are currently fighting on the front line in Yemen.

Both the Houthis and the government have gone back on anti-violence pledges they have made to end their merciless recruitment of children.

Western media outlets can no longer stand by in idle silence and keep the world ignorant of the devastation occurring in Yemen.

As the lives of  thousands are lost including those of vulnerable children, it is time to draw global attention to their plight.

In spite of ongoing UN-backed peace talks and half of all prisoners released by pro-government and opposing Houthi forces in early June 2016, more action needs be taken, particularly in the case of child soldiers.

The parties to the conflict in Yemen should be placed under international pressure to release captured children and stick by their commitments to not re-enlist child soldiers.

Through widespread awareness-raising by major media outlets  and the open condemnation of brutal war practices, we will not only strive for the eradication  of child soldier recruitment, we will help Yemen’s people
restore peace in their war-torn nation.