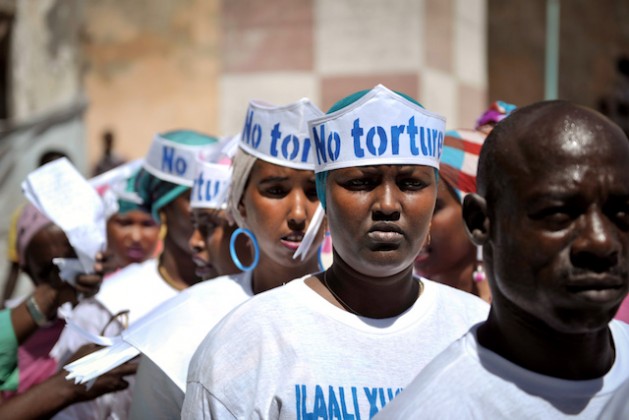 Singers wearing hats advocating "No Torture" line up before performing at a Human Rights Day event outside of Mogadishu Central Prison in Somalia on Dec. 10, 2013. Credit: UN Photo/Tobin Jones

ROME, Dec 26 2016 (IPS) - As Human Rights Day approached this Dec. 10, the United Nations Office of the High Commissioner (OHCHR) issued a statement urging all governments to join in the fight for universal equality and justice.

The OHCHR emphasised the fundamental importance of the adoption and construction of an international human rights system based upon the Universal Declaration of Human Rights 68 years ago. The statement described the progressive declaration as “the greatest achievement of the international community since World War II”.

Since its initial implementation, the universal human rights system has relentlessly provided aid and defense to vulnerable communities and individuals under threat the world over.

However, the OHCHR is aware that any significant progress made for universal human rights can be swiftly reversed. Today, the rise of manipulative populist movements has legitimized xenophobic, homophobic, sexist, and other forms of divisive discrimination. Intrusive governments have destabilized and weakened the power of civil society.

Hate speech is on the rise, inciting violence and hostility. “A chill wind is blowing through much of the world and the very notion of human rights is under increasing attack,” the OHCHR report warned.

However, three special procedures mandate holders critiqued the statement issued by the predominantly Western OHCHR “human rights experts,” stating that it was a “far cry from reality”. While mandate-holders acknowledge the importance of “experts” on the issues surrounding sexual minorities, hate speech and homophobia, they believe the statement excluded the views of many other minority groups.

Currently, there are 43 thematic mandates and 14 mandates related to countries and territories, with 80 mandate holders. Special procedures experts work on a voluntary basis; they are not UN staff and are independent from any government or organization and serve in their individual capacity.

In response to what they considered to be a “selective and imbalanced” text, the dissatisfied mandate holders issued a “complementary opinion” with the sole objective of “putting the issue of human rights in the proper perspective”. The three mandate-holders call for a “full overhaul of the UN Human rights mechanism”.

On Dec. 21, the three special procedures mandate holders released a media statement urging the international community and universal human rights mechanisms to engage in a constructive debate. The mandate holders considered the most pressing concerns to be the right to development, food security, clean water and sanitation, education, and sovereign debt restructuring.

The authors of the complementary opinion consider it imperative to evaluate and assess the root causes of conflict and inequality, not merely skim the surface by placing the blame on the resultant outcomes of unrest and instability. The mandate-holders consider this essential in the prevention of further human rights violations.

“It is not helpful to condemn ‘populism’ if one is not willing to recognize that populists are merely filling the vacuum left by governments that for decades have been insensitive to the needs of the people, who have continued ‘business as usual’, and not listened,” the complimentary opinion said.

The complimentary statement further condemned the “selective” empathy for victims of social phobias.

“There is need also to reflect on the reasons for those multiple phobias, offering guidance as to how to defuse them in a manner consistent with human rights and human dignity,” the statement continued.

The mandate holders also believe that it is precarious to condemn the rise of “hate speech” and “incitement to violence” without clearly defining what they mean. “Interpretation of ‘hate speech’ cannot be left to the discretion of governments and prosecutors, as this would open the door to arbitrariness contrary to the rule of law and tantamount to censorship,” the media statement explained.

The mandate holders asked the international community to recommit to the upholding all human rights enshrined in the Universal Declaration of Human Rights of Dec. 10, 1948 and in all related Covenants and Treatises. On the occasion of New Year 2017, they urged the world to avoid “privileged selectivity” and consider all rights to be of equal importance.

“As proclaimed in the Vienna Declaration of 25 June 1993 on Human Rights: “The international community must treat human rights globally, in a fair and equal manner, on the same footing and with the same emphasis,” the statement concludes.