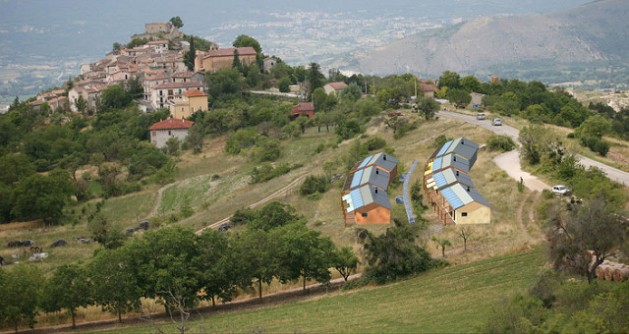 Italy is no stranger to the devastating effects of earthquakes. An image of Pescomaggiore village which was destroyed by the earthquake that hit the mountain region of L’Aquila in central Italy on Apr. 6, 2009, and eventually rebuilt by its 40-odd inhabitants with straw and wood.

The initial early morning earthquake was followed by magnitude 5.1 and 5.4 aftershocks, the tremors reported to have been felt by inhabitants in Rome, Rimini and as far south as Naples.

La Repubblica has reported the hamlets of Accumoli and the neighboring town of Amatrice to have been “razed to the ground.”

Not a single building has been spared, including schools and hospitals.

The current death toll has now reached 247 , in spite of 4’300 rescuers using heavy lifting equipment and their bare hands in a strenuous bid to find the last remaining survivors.

“My village no longer exists”, the mayor of Amatrice, Sergio Pirozzi, stated.

A high number of the fatalities have been of children, amongst them an 18-month-old child in critical condition who died in the now-demolished Ascoli Piceno hospital.

The child’s parents were no strangers to the devastating effects of natural disasters. They had relocated after experiencing the forceful earthquake to hit L’Aquila, a city in the region of Abruzzo, in 2009.

In fact, earthquakes have always been a threat to those who live along the Apennine mountain range in central Italy.

Through the centuries Italy has suffered from the destructive force of earthquakes. Over the years, thousands have died as a result of tremors equal to or stronger than those felt on Wednesday night, 24 August.

The “Messina” earthquake reduced Sicily’s second-largest city to rubble and took the lives of over 82’000 in 1908.

The “Abruzzo” earthquake in 2009  resulted in the death of 300 and demolished the 13th century city of L’Aquila.

Italy’s geographical location makes it prone to the threat of powerful earthquakes.

“Many parts of Italy lie on a major seismic fault line, minor tremors and earthquakes are almost a daily occurrence.” the Italian Foreign office told the Telegraph UK.

Mayor of Amatrice Sergio Perozzi  warned that roads in and out of the town were cut off. “There’s been a landslide and a bridge might collapse,” he stated.

Italian authorities are currently warning the public of the risk of aftershocks in the areas affected.

On the same day the earthquake in central Italy struck, a 6.8 magnitude quake in Myanmar left at least 3 dead and damaged ancient cultural sites and temples in the centre of the country.

Secretary-General Ban-Ki Moon’s spokesperson said the UN and its partners are ready to stand by in support of countries where humanitarian aid is most needed in the aftermath of natural disaster.

“The Secretary-General is saddened by the reports of  lives lost and damage caused by earthquakes in Italy and Myanmar”, spokesperson Stephane Dujarric told the Regular Daily.

Natural disasters, particularly in the form of earthquakes,  have quite literally “shaken” the world up this 2016.

The strongest quake to have hit Japan since March 2011 occurred on the evening of April 14, registering the maximum 7 on the Japanese seismic scale.

This was followed by another earthquake of similar scale on April 16,  which was determined to be the “main quake”.

Of the 72 victims, 50 were killed instantly, while 17 died of poor health while seeking shelter at local emergency centers.

In the same month, a massive earthquake resulted in  the deaths of 650  and the displacement of over 30’000 people in Ecuador.

The aftermath of the deathly quake lingers on as the survivors now face the grave socio-economic implications of destructive natural disaster.

In addition to the quake costing an estimated 4 billion USD in structural damage, in a country already economically staggered by falling oil prices, the consequential setbacks it has left on the lives of thousands in terms of unemployment, homelessness, and emotional trauma has led to an increase in domestic violence.

Months later, many survivors of the earthquake in  Ecuador are still living in the grief-stricken aftermath of unprecedented calamity.

It is essential that sustainable solutions are set in place to all those left displaced and traumatised by natural disasters this 2016.

Although the rebuilding of demolished infrastructure and the generation of alternative housing is a priority,  the establishment of support clinics to help those most affected cope with the physiological consequences of an earthquake should also be considered of vital importance.

In light of ongoing natural disasters and the devastating effects they can leave on both the psyche and livelihoods on the victims that cross their forceful paths, we must place a strong focus not only on the restructuring of the cities and towns reduced to rubble, but also on the continuous psychological  support of the traumatised survivors.