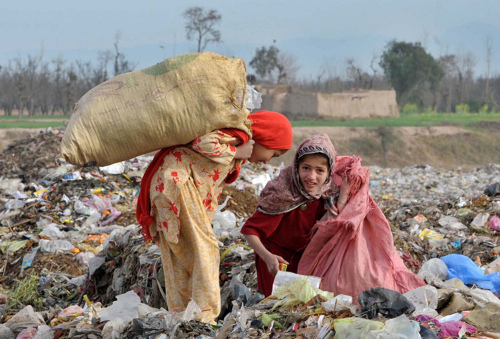 Children pick through garbage in the FATA region of Pakistan. Credit: Ashfaq Yusufzai/IPS

ROME, Dec 5 2016 (IPS) - As Human Rights Day approaches Dec. 10, it offers a moment to pause and look back at the roots of the global development process as a platform for stepping forward. On this day 30 years ago, the international community made a commitment to eliminate all obstacles to equality and inclusivity.

Dec. 4, 1986 marks the date the United Nations General Assembly officially adopted the Declaration on the Right to Development, a landmark text which describes development as an “inalienable human right”.

The United Nations High Commissioner for Human Rights encourages all stakeholders to “approach the 30th anniversary of the Declaration with a sense of urgency.”

“The 30th anniversary of the Declaration on the Right to Development must remind us that marginalized people – including migrants, indigenous peoples, and other minorities, as well as persons with disabilities – have a right to development, and that the true purpose of any economic endeavor is to improve the well-being of people.”

The groundbreaking 1986 declaration called for the establishment of inclusive global societies wherein the elimination of all forms of discrimination would be implemented to ensure sustainability. Developing countries in the Global South perceived to be “lagging behind” would be restored through the “international cooperation” advocated by the text.

The declaration stressed the importance of active and meaningful participation in the development process, even by those traditionally silenced and stigmatized by society. The marginalized poor were encouraged to speak out in the name of their rights. The emphasis on inclusivity highlighted the importance of non-discrimination and equal opportunity in the development process.

The 2030 Agenda for Sustainable Development includes, in its consensus, the right to development. The main objectives of the 1986 declaration are also reflected in both SDG16 for the promotion of peaceful and inclusive societies in addition to SDG17 which calls for the strengthening of global partnerships.

Undoubtedly, as we approach the 30th anniversary of the 1986 declaration, there are several significant achievements to reflect on, most notably the reduction of more than half of the population of people living in extreme poverty and in conditions of undernourishment in developing regions. In addition, the adoption of the declaration also resulted in improved access to clean drinking water and a much-needed increase in official development assistance.

However, despite significant progress, poverty and inequality persist. According to the office of the United Nations High Commissioner for Human Rights, world wealth remains unevenly distributed. Over 700 million people still live on the equivalent of less than two dollars per day. The limited access to healthcare, higher education and employment suffered by vulnerable segments of society runs the risk of pushing 100 million more into poverty by 2030, according to the World Bank.

Increased inequality and injustice in the developing world indicate the shortcomings of the 1986 declaration. An ongoing debate circles around its ineffectiveness, with many arguing that there is a lack of clear, coherent guidelines and thus far, it cannot be recognized as a legally binding instrument.

Differing interpretations of the declaration have also resulted in the absence of clear-cut solutions to critical development problems. While the United Nations Development Programme claims that any action, in order to be developmental, must be human rights-based, the Vienna Declaration and Programme of Action in addition to the UN 2030 agenda state that the right to development calls not only for enforcing action at the domestic level, but also for enabling action at the international level.

Both states and individuals share an equal responsibility to contribute to the creation and maintenance of a peaceful and inclusive global society.

Although the 1986 declaration was at first celebrated and welcomed by the international community, in recent years it has received less support from developing countries.  Rising inequality, limited economic opportunity and lack of access to basic services have led to lost faith in its true effectiveness.

Recently, a promising step forward was made for the development agenda, especially to tackle the past “ineffectiveness” of the right to development, when the Human Rights Council Resolution 33/L.29 was adopted at the council’s 33rd session this September.

The council’s resolution – although welcomed by countries in the Global South – was met with extreme reluctance by developed countries, whose delegates claimed the resolution unnecessarily duplicated the work of other mechanisms already put in place.

On Dec. 5, The Geneva Centre for Human Rights Advancement and Global Dialogue and the Permanent Mission of the Government of Azerbaijan hosted a panel discussion on the rising debates surrounding the right to development in 2016. The core objective was to of emphasize the importance of granting a voice to the voiceless and most importantly, and the necessity of global solidarity as a means of eradicating underdevelopment.

The approach undertaken by the Geneva Centre and the government of Azerbaijan places civil society at the heart of the development process, as defined 30 years ago, in the 1986 declaration. The power of interconnected global communities knows no bounds, especially to build bridges between the developed and developing world, and ultimately, eliminate persistent North-South divides.

In his opening address, H. E. Dr. Hanif Al Qassim recognized the advancements in terms of development achieved over the past thirty years, but regretted that the ongoing violence, conflict and displacement were in contradiction with the vision expressed by the Declaration in 1986. He recalled that violence was trampling on both human rights and development, and encouraged the audience to use the opportunity of the debate to revitalize their commitments in this sense.

Ambassador Idriss Jazairy, Executive Director and moderator of the panel discussion, emphasized the importance of global solidarity in age of ongoing violence, corruption, economic crises, and most notably, mass displacement, the world over.

In his opening remarks, Ambsaddor Jazairy discussed the revitalization of a peaceful international community and called for the inclusion of the 1986 Declaration  in the International Bill of Human Rights.

“Development is a human and a peoples’ right. The individual is entitled to have the means to thrive professionally, and peoples have the right to break the chains of subordination to an unjust global order,” he said.