Thousands of individuals are denied their basic human rights and treated as a criminal “underclass” in what appears to be a perfectly “legal” and “just” system. 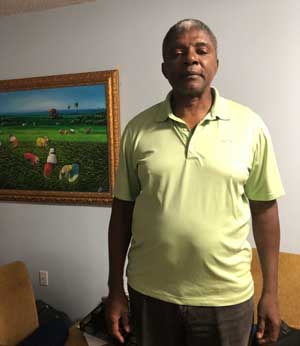 The United States currently carries the world’s highest prison population with a staggering 2.3 million individuals behind bars. In other words, 1 out of every 99 North American adults are confined to a prison cell at present.

The state of Florida has the third largest prison population in the country. Over $2.7 billion per year is spent to house criminals for predominantly petty crimes.

U.S. prisoners have no political rights, no say in how they are treated, and almost no groups or organizations to advocate on their behalf.

Once released, they cannot avail of social housing or financial aid. In addition, they must state that they were a convicted felon on every job application they apply for.

According to the Bureau of Justice Studies due to poor rehabilitation and access to services in the public domain, 76% of prisoners will be re-arrested within 5 years of release.

I spoke to Jean-Claude Nöel, a former convict, on his experience within Florida’s criminal justice system.

Jean-Claude is well-poised and notably articulate. His family back in Haiti come from a long line of educators and influencers.

One could scarcely imagine such a man having spent close to 10 years behind bars.

Among other convictions, Jean-Claude was charged with conspiracy based on “hearsay evidence” related to racketeering, with no tangible evidence to prove his crime.

Jean-Claude claims that this is wrongful under the eyes of the law and cannot be used to convict an individual.

In 1998, Jean-Claude embarked on a 10-year battle with the state of Florida. He is still in the throes of a heated debate to revise legislation for statute 777.04 on “Attempts, Solicitation and Conspiracy.”

As the recount of Jean-Claude’s conviction progressed, a gross injustice was made apparent. After three and a half years behind bars, he went to trial.

He was offered a bond of over $1million. His requests for a reduction fell on deaf ears, and were denied by the court. His lawyer charged a hefty fee of $15,000 and did little to resolve his case.

Evidently, telling your side of the story proves exceedingly costly in the U.S. criminal justice system. It is not a right granted to low and middle socio-economic classes.

From staggeringly high attorney’s fees and extortionate bonds, for many, it’s advised and encouraged to just plead guilty to crimes they may not have committed.

Jean-Claude explained, “the state and lawyers discourage one from going to trial, it is far too costly and time-consuming.”

As a Haitian immigrant, conditions within the U.S. prison system were exceptionally unjust, just two days before his release date, he was transported to a detention center for deportation.

In the detention center, was placed in solitary confinement for 23 hours a day, which is considered to be a form of torture by prominent human rights groups such as Amnesty International.

He narrowly evaded deportation by pleading his case to a judge, highlighting the fact that his wife and kids, located in the United States were eagerly waiting for him on the outside after 9 years.

As echoed in Michelle Alexander’s work, The New Jim Crow, Jean-Claude shares the notion that prisoners are treated as a marginalized caste within North American society.

Both within and outside of prison walls, prisoners are stripped of their basic rights to reform and rehabilitation. “the majority leave the prison worse off than when they came in.” Jean-Claude stated.

To overcome such demoralizing setbacks, he decided to put his background in entrepreneurship to use.

A high percentage of male prisoners’ education in the state of Florida do not surpass students aged 11-12, or the U.S. schooling equivalent of the sixth grade.

Therefore, Jean-Claude’s introduction of an “Entrepreneurship and Innovation” program in his assigned prison proved impactful.

Over 150 students went through Jean-Claude’s program which focused on technological literacy and innovation. Although he’s now released, he continues to provide educational and job creation services to prisoners and ex-convicts.

Jean-Claude’s organization, Riemerge, focused on rehabilitating men who have been trapped in the U.S. criminal justice system through classes on technological innovation and advocacy for the employment of prisoners in major coporations.

As the children of inmates are six times more likely to end up incarcerated themselves, Jean-Claude also places a key focus on the sharing of ideas between parents and children.

Parents share their learnings and achievements with children and encourage them to think innovatively about technology and entrepreneurship as well.

Just where does the future lie for wrongfully convicted young men?

Jean-Claude highlights the importance of artificial intelligence in the criminal justice system.

“I am hopeful for reform because of technology, the criminal justice system is adopting new technologies at a brisk pace. I believe these technologies will remove bias out of the courts and out of policing.”

That saying, new technologies come with their own challenges. Jean-Claude offered the example of Brian Brackeen, an African-American entrepreneur, the founder of Kairos, who has developed a successful “face recognition” technology.

Brackeen openly refuses to sell his product to law enforcement, as bias can be passed on to computers.

“I’ve been pretty clear about the potential dangers associated with current racial biases in face recognition, and open in my opposition to the use of the technology in law enforcement.” Brackeen stated.

All in all, with enhanced awareness and dedication, ex-convicts like Jean-Claude are optimistic in their ability to eradicate the gross injustices imposed by the North American criminal justice system.

Jean-Claude’s story is one of many.

He will do everything in his power to advance access to justice and ignite change for inmates who are wrongfully silenced.