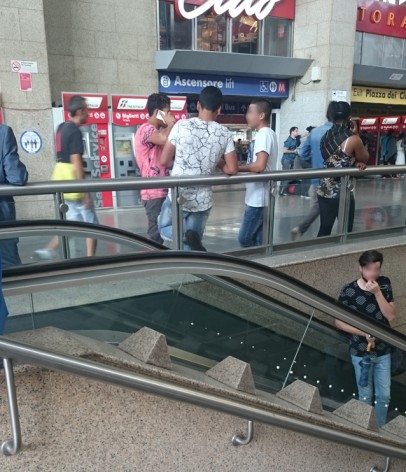 ROME, Sep 23 2016 (IPS) - Rome ….. Termini station, 2:00 pm on a Tuesday afternoon. Five young boys are standing next to the escalators, constantly shifting, dispersing, meeting up again. They are laughing, typing on their phones, chatting, smoking. They seem like average teenagers with fancy hairstyles and smart clothes. But every once in a while, they nervously glance over to the security personnel circling Termini station. Or carefully examine older men walking by.

Some of these kids are Egyptian, and landed in Italy by boat. “They let in minors”, Ahmed says. He came when he was 14 years old, on his own. His family remained in Egypt. Today he is 18 years old, and he is the oldest in the group.

A man with grey hair and a baseball cap appears, talks to Ahmed, and moves away. Ahmed whispers to another boy in the group, 17-year old Hasani whose dark hair and sparkling blue eyes make him the most attractive in the group. Later, when we approach him by asking for a cigarette, he assures us that he would not only offer us a cigarette, but buy us a whole pack of them, if only he had the money.

We watch Hasani going down the escalators, the man in the baseball cap follows at a 20 meter distance. They make their way through crowds of tourists, pass by coffee bars and shops, always maintaining the 20 meter distance, never looking back. They merge with the stream of people rushing down towards the metro station, then take a quick turn, and Hasani disappears into what at first glance resembles a maintenance room. The man in the baseball cap follows. It turns out to be a public toilet, hidden away in one of Termini’s many underground corridors, out of sight from the people waiting for their trains, and from the eyes of the security guards.

“Even when we place these kids in foster centres, nobody checks whether they are going to school. We believe that there is a connection between those who traffic the children to Italy and
those who employ them”

Five minutes later, both of them reappear, open the door and hastily take off in different directions. Hasani goes back to join Ahmed next to the escalators. And they continue to chat, laugh, smoke, type on their phones, as if nothing had happened.

Migrant minors who enter Italy are supposed to be taken in by “Case Famiglie”, foster homes sponsored by the Italian government. There, they would receive meals and a place to sleep, education and integration programmes made available to them. The foster homes receive money from the state to provide the migrant minors with these basic services, and most importantly, to keep them safe.

Yet, many of them end up in conditions of forced labour. They work in warehouses, as porters in markets, at petrol stations – or they prostitute themselves at Termini station.

“Even when we place these kids in foster centres, nobody checks whether they are going to school. We believe that there is a connection between those who traffic the children to Italy and those who employ them”, Mariella Chiaramonte, chief of the police station in Tivoli, near Rome, said in an interview with The Guardian.

Upon their arrival in Italy, the children often find themselves indebted to the people who trafficked them here. Because they are being threatened that harm will be inflicted on their families back home if they do not repay the money for their trip, often they become vulnerable targets for sex work recruiters and drug dealers. For the migrant children, however, this type of clandestine work becomes a quick way to make larger amounts of money in order to repay their debt.

Ahmed and Hasani spend the entire day at the train station. As soon as he turned 18, Ahmed explains, he left the foster home. Now, he shares a small apartment with other migrants from Egypt. How can he afford to pay the rent? “I work at a car wash”, he says. But not convinced by his own words, he breaks into a bout of nervous laughter. He cannot look at us. They are only here to meet friends, he explains, to “hang out”.

There is a sudden downpour outside. Bangladeshi street hawkers appear at the station’s entrance, trying to sell umbrellas. As one of them approaches us, he tells us that we should not get involved with the Egyptian boys. “They steal from people waiting for their train and they sell drugs”, he says, and when asked if he knows what other business the boys have here, his expression turns cold. “We never mix with them. They are dangerous.”

The man in the baseball cap reappears, keeping his distance but staring at us while we talk with the boys. He does not seem to be a customer anymore. He appears to be supervising the boys, keeping them in line. He is nervous about them having established contact with people from the “outside”. We realize we have overstayed our welcome and it is time to leave.

Following the “Drug Dealing and Prostitution of Minors” report produced by Mediaset in March 2016, the authors who write on migrant issues spent time in Rome’s Termini station observing the lives of migrant children.