Hahn Choong-hee is Ambassador and Deputy Permanent Representative of the Republic of Korea to the United Nations in New York. 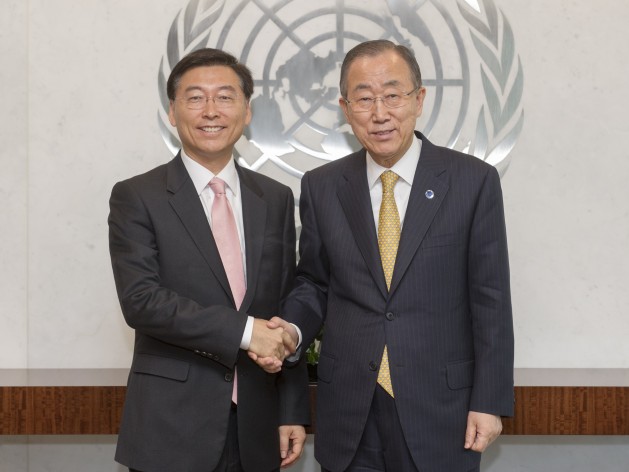 UNITED NATIONS / ROME, Aug 14 2016 (IPS) - Ambassador Hahn Choong-hee, UN representative of the Republic of Korea, spoke with IPS about the implementation of UN Security Council Resolution 2270, which was unanimously adopted on 2 March 2016.

The resolution calls for the universal condemnation of the nuclear threat from the Democratic People’s Republic of Korea (DPRK / North Korea) and was prompted by repeated missile launches by North Korea in defiance of opposition from the international community.

IPS: Undoubtedly, the North Korean nuclear threat endangers and poses a great threat to global peace and security. In light of the UN Security Council Resolution 2270 discussions in New York on the 30th of June, how will the Security Council tackle nuclear weapon issues? In other words, what role will the UN and the global community play in the North Korea Sanctions Regime?

Ambassador Hahn: The conference on Resolution 2270 held in New York in June 2016 was very significant as key discussions were developed on the topic of North Korean evasion tactics. The discussion was hosted by three major sponsoring countries, South Korea, the United States and Japan, who are all leading voices in the strive against North-Korean nuclear advances.

With diplomatic démarche I believe we can overcome North Korea’s defiance.

In order to enforce UN Sanctions on North Korea, the most significant criteria for member states to comply with the sanctions regime is to present a 90-day report. As of yet, we’ve received around 40 reports from a select number of countries. The generation of reports this year has been above average, however, in spite of this great intake, it is still not enough. It is now time to raise global awareness on the importance of the enforcement of this sanction.

The implementation of Resolution 2270 has proved exceedingly difficult as North Korea is defiant and acts out against the international voice. In fact, they’ve launched 7 missiles recently. The missiles were particularly alarming worrisome because if they had been successful, there impact could have reached as far as Japan and US territory. Although North Korea’s Musudan last missile launch attempts have failed. The latest missile to be launched was more successful than the rest, as its maximum delivery was 1000km and its distance 400 km. This is why the international cooperation of state agencies and civil society organizations is critical at this juncture to put the threat of nuclear advancement to a halt.

IPS: Will the development of nuclear technology in the DRPK have a grave impact on the world? How does the UN Security Council plan to address these advancements?

Ambassador Hahn: Most definitely, the impact would be immense if the advancements proved successful. North Korea is continuously trying to improve on tried and tested nuclear methods and are relentless in their belief that nuclear power ensures national security or regime survival. They are currently attempting to work on a nuclear technology referred to as “musudan” in the Korean language. This is an intermediate missile, if it’s further developed it could be used as a delivery means carrying nuclear warhead. It’s a particularly precarious advancement as this missile could cover the US territory of Guam.

Japan is particularly concerned about North Korea’s continued launch of missiles. This has become a critical issue for Japanese security. Whenever North Korea launches any mid to long range missile, Japan has been reacting strongly against the last seven missiles.

Another international preoccupation comes from the launching of missiles from mobile pads. These missiles could be concealed and launched at any time and in any given place. We’ve already born witness to this danger as they’ve attempted to launch missiles in a similar manner 7 times. The UN has issued a press statement each time, even if it was a failure, to communicate the message that the UN is watching and we are, by no means, disregarding what they are doing.

In reaction to North Korea’s defiance, we’d like to share a strong message. The international society are both committed and rigorous in their fight to stop North Korea’s engagement with nuclear weapons.

North Korea has tried to avoid their compliance with the sanction through many evasion tactics. By issuing the publication of case studies on North Korea with all member states, a strong emphasis will be placed on the country’s refusal to comply with international regulation. In this way, each member can compare what they’re doing against North Korea and what other countries are experiencing in relation to implementation of the sanction.

We believe that by condemning the actions of North Korea through global dissemination and by member states openly discouraging their behaviour we will eventually stamp out the North Korean nuclear threat.

IPS: How can North Korean defiance and refusal to comply with Resolution 2270 be resolved in a peaceful manner? How significant will international cooperation and coordination be in countering the impact of North Korea’s violations?

Ambassador Hahn: As we are all too aware, there is a critical need to implement sanction pressure in North Korea at this juncture. In several countries, bilateral sanctions have been introduced. For example, the US passed a law to introduce the so-called “secondary boycott”, this is a way to condemn and place penalties on foreign companies, for example companies from other states operating with North Korea, which is helping North Korea’s WMD capabilities.

This law gives leverage to the administration to decide what kind of sanction measures they can take. The US is trying to penalise regions such as North Korea for human rights violations. The EU has also introduced various forms of sanction pressure.

Bilateral pressure will also be encouraged to put a stop to North Korea’s clandestine cooperation with Middle Eastern and African countries. “Diplomatic demarche” has led to clandestine transactions between companies from North Korea and African and Middle Eastern countries. It is now time for the global community to condemn North Korea’s abuse of the international finance system and shut down their clandestine systems of trade and banking. Through the enforcement of laws together with the strength of bilateral pressure, with diplomatic demarche I believe we can overcome North Korea’s defiance.

Ambassador Hahn: Unfortunately, as of yet, the implementation has been met with nothing more than a series of unmet promises on China’s part. Which is worrying as I truly believe a solution to the “North Korea problem” could come through the continued pursuit and that China take faithful implementation of 2270.

The Chinese government continuously assure us that they’ll implement the Resolution 2270 sanction, however it seems premature to say that China is in full implementation as there is a so-called “livelihood” exception in some of the sectoral ban of the resolution.

We will have continued discussions with China to see how they are going to realistically implement the 2270 general and ensure their future commitment to it.

IPS: In spite of China’s current position on the implementation of Resolution 2270, have North-Korean-Chinese relations worsened due to the nuclear threat North Korea endangers the world with?

Ambassador Hahn: Yes, relations between North Korea and China have been tarnished. In a recent diplomatic visit to China, North Korea demonstrated their need to avoid diplomatic isolation. Lee Soo-Yong, North Korea’s senior worker’s party official, met with the president of China, and expressed the importance of maintaining good relations with China in a bid to avoid isolation.

Chinese President Xi Jinping communicated the message to the North Korean delegation that while China acknowledges the importance of bilateral relations between China and North Korea, they do not support North Korea’s development of nuclear weapons and missile launches.

However, in spite of North Korea’s fear of exclusion and isolation, they did not seem to take heed of China’s advice, protest, and warning. North Korea believe nuclear weapons are the key to their survival and they refuse to compromise anything for it.

IPS: As the number of North Korean labourers in the international workforce grows and illicit negotiations between Middle Eastern and African companies ceases to discontinue, North Korea’s defiance has shown that it not only endangers the world with the threat of nuclear warfare, it also poses a grave threat to the international financial system. How does the UN Security Council together with the aid of the international community aim to eliminate this threat?

Ambassador Hahn: A big stake in North Korea’s relationship with other countries, is its labour force abroad. So far, over 35,000 North Korean workers worldwide are on special contracts, generating over 300 million dollars a year. Some countries are now reviewing and reconsidering these contracts and a couple of countries have made a decision to discontinue some of the contracts.

We’ve approached several countries about the implementations of these types of sanctions. Recently, Qatar, sent over 100 workers back home to North Korea. These actions discourage the continuance of North Korea’s careless attitude. China are also attempting to implement a lot of diplomatic demarche. For example, several North Korean restaurants have now closed in China.

IPS: Finally, what are the expected outcomes of Resolution 2270 and where will the UN Security Council go from there?

Ambassador Hahn: At present, North Korea’s power consolidation process is very troubling. North Korea’s leader Kim Jong-Un wants to demonstrate his absolute power through the showcasing of North Korea’s nuclear capabilities. In this way, North Korea has demonstrated zero intention to abandon their nuclear weapons program. They consider it to be a form of economic prosperity and ultimately, survival. They are trying to go ahead with “Byungjin”, literally “going together” with nuclear and economic development.

As of yet, it is much too early to judge whether the 2270 general is being implemented in a faithful manner on an international level. As North Korea is defiant and is engaged in the launching of missiles it’s clear that they do not respect the UN sanctions. This attitude will be exceptionally challenging for the future success of the Resolution. North Korea is not interested in complying with internationally beneficial regulations and this is something that will be difficult to reverse.

As I mentioned before, it is not not easy to predict any future measures but what is important to emphasis is that there should be a very steady, orderly mid and long-term process of implementation of Resolution 2270 in North Korea. I hope that the diplomatic demarche from member states will enable us all to work together, along with the critical assistance of China, to ultimately, put North Korea’s engagement with nuclear weapons to a stop.