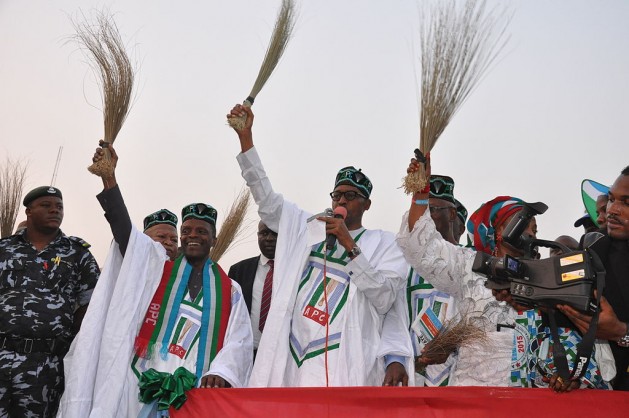 Buhari had previously ruled Nigeria from January 1984 until August 1985 – a period in which there were widespread accusations of human rights abuses – after taking charge following a military coup in December 1983.

The Mar. 28 elections were observed by teams from the United States, United Kingdom, European Union, the Economic Community of West African States (ECOWAS) and the African Union. Carl LeVan, an assistant professor at the School of International Service, American University in Washington, DC, took part in the National Democratic Institute’s election observation mission from the United States.

“[President Muhammadu] Buhari has an unprecedented opportunity to recast the Muslim face of Africa at a time when violent terrorist movements have both perverted Islam and distorted Western foreign policies meant to be more multifaceted” – Carl LeVan, member of a U.S. observation mission for the Mar. 28 presidential election in Nigeria

Speaking with IPS, LeVan, author of Dictators and Democracy in African Development (2015), remarked on the surprise success of Buhari’s All Progressives Congress (APC) party that was only formed in February 2013.

“The defeat of Africa’s largest political party, the People’s Democratic Party, will bring the All Progressives Congress (APC) into power after barely two years of organising, mobilising and coalition building. (Muhammadu) Buhari will enter office with a strong mandate from the voters, having won four out of the country’s six geopolitical zones, and the APC will enjoy a comfortable majority in the Senate.

“Though a northern Muslim from Katsina, his support included the predominantly Yoruba southwest, where President Goodluck Jonathan recent delivered bags of cash to traditional rulers according to news reports and where the militant Odudwa Peoples’ Congress launched a wave of thuggery in recent weeks.”

The election upset was especially poignant for Nigerians of the northern states, the area most devastated by Boko Haram terror attacks. While some of the vote counting was impeccable, not all of the voting went smoothly. Observers told of protestors objecting to perceived rigging, harassment, ballot boxes snatched and over-voting.

“Even before the results were announced,” said LeVan, “voters in the north reacted with jubilation, and militant groups, including the Movement for the Emancipation of the Niger Delta, began surreptitiously re-arming in the creeks of the south. Sources I met with over the weekend in Rivers State say they have seen caches of weapons in camps backed by militants such Ateke Tom and others.

“In addition to such seemingly minor procedural problems, the public was locked out of some collation (vote counting) centres. We also received credible reports of serious harassment. A soldier was killed in some of the violence in Port Harcourt, and a large protest took the state electoral commission by storm on Sunday.”

The opposition victory has been achieved but some are already wondering what the new leader, not known for his adherence to human rights, will prioritise.

According to LeVan, “Buhari has a mandate, and his most urgent challenge is to neither misinterpret nor abuse it.

“According to an Afrobarometer poll released on Mar. 23, 40 percent of Nigerians say the president ‘should be allowed to govern freely without wasting time to justify expenses’, and 25 percent say the president should ‘pass laws without worrying about what the National Assembly thinks’. Sixty-eight percent are not very or not at all satisfied with the way democracy is working.”

Recalling a recent national election won by a former dictator, LeVan said that “the last time Nigeria elected a former dictator, Olusegun Obasanjo in 1999, he spent his first term battling the National Assembly and quelling violence in the region that largely voted against him. But he also began building institutions and establishing trust with his sceptics.

“The last time Nigerians had Buhari at the helm, the jubilation quickly gave way to frustration, repression, and economic failure.

“Buhari’s ‘honeymoon’ will therefore be critical, and probably even shorter lived than his memories of 1984. He will need to do more than make grand rhetorical gestures to democracy; he’ll need to practice it and educate his own supporters about the advantages of the justice and fairness it offers, even where the cost may be the kind of efficiency the Afrobarometer respondents appear to be longing for.”

LeVan also urged the new president to “go south” in view of the fact that Nigeria has often been a divided country with loyalties to different regional centres and different religious and ethnic affiliations, because this would send a “valuable message to northerners that he is everyone’s president.”

By “going south”, he said, the newly-elected president “could also include a clear transition plan or policy for the status of the ongoing amnesty programme for the Niger Delta militants, who need reassurance that they do not need an Ijaw president [like President Goodluck Jonathan] in order to have “resource control” taken seriously, or to have environmental clean-up and developmental needs addressed.

“The sooner and more clearly they hear this message, the less likely will be the re-ignition of the Delta rebellions … This is also important because in a country partly divided along religious lines between north and south, Afrobarometer reports that trust in religious leaders at 29 percent is higher than in the National Assembly, governors, local governments, or even traditional rulers (16 percent).

“Christian Igbos in the east (who overwhelmingly rejected the APC) and minorities in the south need to know they can trust Buhari, and he needs their cooperation to govern peacefully and practically.”

“While some continuity may help preserve institutionalised knowledge, particularly with regard to the recent ‘surge’ against Boko Haram, the mishandling of the Chibok girls’ kidnapping reduced confidence in the national security team, and the pressure applied to the electoral commission prior to the election delay has contributed to the perception that some soldiers and many advisers are partisan.”

Boko Haram has been displaced but not defeated, LeVan warned, and this means creating a “credible counter-insurgency strategy”.

Among others, such a strategy would include “sustained high-level interactions with the multinational coalition partners, and a repairing of bridges to the United States, United Kingdom and other allies with a stake in Nigeria’s peaceful prosperity.”

In this context, said LeVan, a visit to the United States and the United Kingdom would be beneficial to reconnect with a disenchanted diaspora. “This will be important in the United States, where leadership in Congress has interpreted Boko Haram as a war against Christians, rather than a complex insurgency with many different victims and deep historical and socio-economic roots.

“Buhari has an unprecedented opportunity to recast the Muslim face of Africa at a time when violent terrorist movements have both perverted Islam and distorted Western foreign policies meant to be more multifaceted.”

LeVan also advised Buhari to pick a “credible, competent and diverse economic team”, noting that “in early 2014, the government of Nigeria (along with the World Bank and others) highlighted trends in economic diversification. The near crisis triggered by the decline in oil prices since then suggests either these claims were overstated or much more work needs to be done.

Buhari could reform the refinery and oil importation mechanisms, commit to publishing all of the federal governments revenue transfers to subnational units each month (like it used to), and pick a combination of experts from academia, the private sector and the bureaucracy to get the economy back on track.”

“A few obvious steps,” concluded LeVan, “would go a long way: reaffirm the independence of the Central Bank (whose governor was replaced last year), stabilise the currency, and consult the National Assembly about budget plans and fiscal crises … The rest is up to the Nigerian people, who spoke on Mar. 28. Voting was just the beginning.”

Any views expressed by persons cited in this article do not necessarily represent the views of, and should not be attributed to, IPS – Inter Press Service.