YAOUNDE, Apr 26 2015 (IPS) - Cameroon’s government under President Paul Biya is bearing down on a separatist movement fighting for the rights of a minority English-language region, using as its weapon a sweeping new anti-terrorism law introduced at the end of last year.

The separatist Southern Cameroons National Council (SCNC) – which is demanding an independent Southern Cameroons made up of Cameroon’s Northwest and Southwest Regions – has been targeted under the new law, which forbids public meetings, street protests or any action that the government deems to be disturbing the peace. 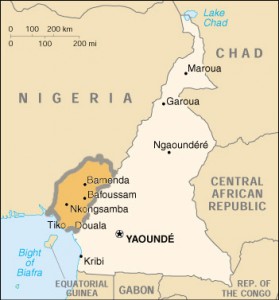 English-speaking Cameroonians make up over 22 percent of the country’s population of 20 million.

Long desired by Western powers for its beauty and natural resources, Cameroon was first occupied by the Germans in 1884. After the First World War, the French and British carved it up between them as League of Nations mandates – four-fifths went to France, the rest to the United Kingdom.

A federation was declared in 1961, followed by the annexation of the English-language region into the United Republic of Cameroon, with its capital in Yaounde in 1972. Dissension continues to seethe, however, in the English-speaking regions which resent the lack of control over their assets.

Over the years, Cameroon has downplayed its problems with the English-speaking regions, while making token placements of a few of their citizens in its administration.

Secessionists say this relationship of inequality has led to impoverishment of the territory and its population and a diminishment of their educational and cultural heritage, while feeding the flame of ethnic strife between the people of the Northwest and Southwest Regions.

The extraction of oil and the expropriation of Cameroon’s substantial oil revenues is frequently cited as the touchstone for frustration and anger among those of the struggling south.

The separatist Southern Cameroons National Council (SCNC) has been targeted under Cameroon’s new anti-terrorism law, which forbids public meetings, street protests or any action that the government deems to be disturbing the peace

In this regard, the Natural Resource Governance Institute (NRGI) gave Cameroon a “failing grade”, ranking it 47th out of 58 countries for such weaknesses as enabling environment, safeguards and quality controls, and reporting practices.

“Cameroon’s national oil company (SNH) dominates the sector,” NRGI reported. “It is directly controlled by the Presidency … The largest revenue streams are collected by SNH and transferred quarterly to the national treasury after subtracting the company’s operational costs – meaning that some oil revenues never reach the treasury.”

Aside from publishing environment impact assessments, Cameroon provides very little information on its extractive sector, noted NRGI, while it performed near the bottom of rankings on measures of budgetary openness and the rule of law.

Oil exploration, production and refining all take place in Southern Cameroons, while oil-derived revenues are paid to the state coffers directly in Yaounde.

Against this background, and since Cameroon’s President Paul Biya endorsed an anti-terrorism law in December 2014, the SCNC has not been able to organise any major gathering.

An attempt this month, on Apr. 3, ended with the arrest of Nfor Ngala Nfor, SCNC Vice National Chairman, and six others in Buea, Southwest Region.

Andrew Kang, who had hosted the SCNC leaders, told IPS from his hospital bed at the Buea Regional Hospital that security forces barged into his house while he and the guests were about to have a meal. “We were not even permitted to eat our food. They just beat us, ordered us to move and led us to the station. We spent four days in a prison cell and only regained freedom at about 5 pm on Apr. 6.”

Kang denied the government’s charges of promoting secession and rebellion which had been levelled against the group.

Talking to IPS, Martin Fon Yembe, a member of the SCNC and human rights activist, said that while the government made it seem that the new anti-terrorism law was designed to boost the fight against Boko Haram, the main aim was to stop the holding of SCNC meetings and gatherings.

“Everyone knows that law was put in place to hinder the activities of the movement and there is no gainsaying the fact that it poses a problem,” he said.

A U.S. State Department human rights report on Cameroon in 2013 referred to security force torture and abuse, denial of fair and speedy public trials and restrictions on freedom of assembly and association. “Although the government took some steps to punish officials who commit abuses in the security forces and in the public service, impunity remained a problem,” said the report.

Meanwhile, thousands of Southern Cameroonians are currently in exile in Europe and the United States and thousands more are on the run because of their support for the separatist movement.

The Biya administration, on the other hand, presents a picture of a country unswervingly headed for growth. In a document titled Cameroun Vision 2035, a long-term vision is described which envisages the consolidation of democracy, enhancement of national unity, economic development and increasing employment.

Under a three-year plan, unveiled in December, Cameroon will spend 1.75 billion dollars “to meet the immediate needs of the population,” focusing on sectors such as road infrastructure, health, agriculture, energy and security.

“The special programme, evaluated at 925 billion CFA francs, is financed through the mobilisation of the required resources from local and international financial institutions at sustainable rates,” Prime Minister Philemon Yang said without giving further details.

In the latest twist to the South Cameroons issue, a meeting this month of Cameroon’s English-speaking lawyers gave notice that an All-Anglophone Lawyers Conference would be held shortly in Bamenda, chief city of the Northwest Region, “to develop strategies at safeguarding the Common Law and to map out the way forward for the Southern Cameroons territory,” the Cameroon Concord reported.

The news online was met with over a dozen enthused readers. “Machiavelli Ayuk” of the University of Buea wrote: “This is the kind of action that the marginalised Anglophone people love to hear. At last we have some Educated Elites in the Anglophone zone…”

The comment was followed by “Fast Man”, a self-described fieldworker, who wrote: “I hope the lawyers use their intelligence and remember their oath. We will never go anywhere under French hegemony. God bless the Southern Cameroons and its citizens…”