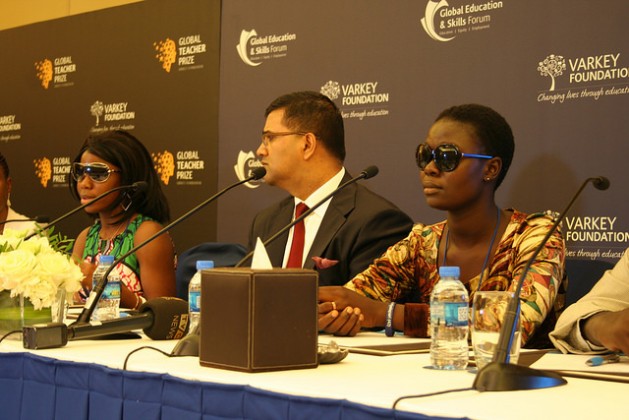 DUBAI, UAE, Mar 18 2017 (IPS) - Though still fearful for her life and the safety of her family, one of the girls who escaped abduction by Boko Haram in Nigeria has appealed to global leaders to intervene and help bring back 195 schoolgirls still being held by the terrorist network.

Next month it will be three years since the Nigerian militants abducted more than 270 girls from the town of Chibok in northeastern Nigeria.

Last October, the Boko Haram fighters freed 21 of the girls, including one with a baby that triggered global outrage and spurred the social media campaign #BringBackOurGirls.

“We have to share our story and tell the world about it for the world to know,’ the student, using a pseudonym to protect her identity, Sa’a* (20) said at press conference on the sidelines of the two-day Global Education and Skills Forum.

Earlier SAA and another girl, identified as Rachel*, who lost her father and siblings to Boko Haram, told the Forum that the kidnapping of the schoolgirls was a painful episode that the world should not forget.

“The only thing we need to do is to ask the world leaders to bring back the girls. We cannot do anything other than speak out,” said SAA, who escaped from the clutches of Boko Haram. She jumped off a moving truck when the group attacked and burnt her school and books in Borno State in April 2014.

Sa’a, who was moved from Nigeria and is currently studying in the United States, said the traumatic ordeal should not be allowed to happen to any student. Her resolve to continue her schooling was the reason she has come out publicly about her experience.

“Every child needs to be educated and to go to school,” Sa’a said. “We must never forget this until all the girls are safely back. Next month it will not be three days but three years and they are not back. It is painful.”

Sa’a told the conference that after they were abducted and forced at gunpoint into trucks, she decided to jump off a moving truck together with a friend who sustained injuries. They were helped by a shepherd and made their way to safety.

Emmanuel Ogebe is a human rights lawyer and director of the Education Must Continue Initiative, which has assisted child victims and IDPs from conflicts, primary Boko Haram. Most of the victims are in Nigeria and a handful in the United States.

“It is a painful situation of what happened to the girls because we understand that there were early warnings that the terrorists were going to strike and supported by the fact that teachers escaped and left the girls. The sense of failure to protect is very story in addition to the fact that the government did not protect the girls at school even when they were warned.”

Since January this year, Sa’a has started college under a project by the Education Must Continue Initiative, a charity which has helped about 3000 other internally-displaced children go to school. She now has an ambition to study science and medicine.

“My dream is to be a medical doctor in the future and inspire others and go back to my home country and help those kids to go back to school and assist others get the education they deserve,” Sa’a says.

Rachel, who is back at school in Nigeria, says she wanted to be medical doctor as well but would now like to be a top ranking military officer after what happened to her father and three brothers.

“I would like to contribute to a better nation. I am not conformable because of what I have seen and I feel bad,” Rachel said. “Some girls cannot go to school now because of what happened and do not value education because without education they can survive. This is sad.”

Rachel is a teenager that went to school in northeast Nigeria. Her father was a plainclothes policeman who had moved his family with him to a smaller town where he thought it would be safer. He was assigned to protect the local church. Rachel’s mum found a job working in the Education department of the church that her father was on security detail to.

Then one day in late 2014, Boko Haram terrorists attacked the church that her father had been assigned to protect.  Rachel’s father fled to his house to gather his children. Unfortunately, as they tried to escape, they ran into the terrorists who shot dead her father and three younger brothers on the spot. They were 14, 12 and 10 years old and in secondary and primary school, respectively.

Vikas Pota, Chief Execuive of the Varkey Foundation, the hosts of the Global Education Forum, said the Boko Haram question is wider than simply the question of the girls, and is related to Internally Displaced Persons (IDPs) in Nigeria and elsewhere. He said collective action was needed to make the world more inclusive thereby creating an environment to access education to all.

“I think it is ridiculous in today’s age that so many girls and all the human intelligence that exists that we do not know where these girls are. It shows we do not care,” Pota told IPS, adding that,” As a father, how can we tolerate this situation? I think the government not – just the Nigerian one but governments around the world – should help and make sure this situation is resolved.”

*True identities have been changed to protect their families.