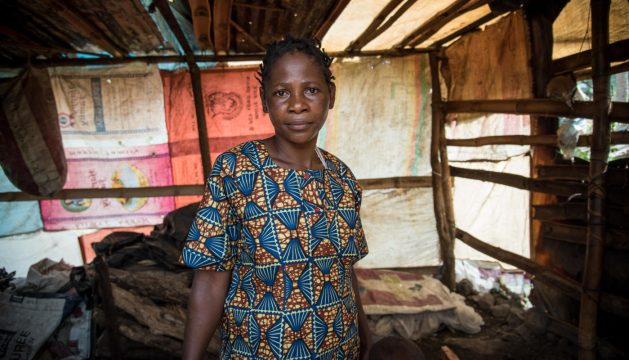 Minette (38) and her family fled their home in Cameroon’s English-speaking regions after their home was burned down. They have received some plastic sheeting and utensils from the Norwegian Refugee Council (NRC), and built a temporary kitchen at their new place in Buea. Photo: Tiril Skarstein/NRC

UNITED NATIONS, May 16 2019 (IPS) - The United Nations must act to prevent further devastation from the escalating crisis in Cameroon, human rights groups said.

Since 2016, worsening violence in Cameroon’s Northwest and Southwest regions has killed almost 2,000 people and displaced over 430,000 people.

For years, the UN has remained largely silent about the crisis. Finally, however, the Security Council held an informal meeting on Monday to address the situation in the Central African country. Still, more needs to be done.

“Security Council members should call on the government of Cameroon and leaders of armed separatist groups to end abuses against civilians in the Anglophone regions and hold those responsible for abuse accountable,” said Human Rights Watch’s (HRW) Central Africa director Lewis Mudge.

“This…is an opportunity to remind abusers that the world is watching,” he added.

Norwegian Refugee Council’s (NRC) Secretary-General Jan Egeland made similar comments to the Security Council, lamenting on the lack of attention and humanitarian response: “When brutal fighting displaces hundreds of thousands of civilians, it usually sets international alarm bells ringing. But, the shocking unmet needs of tens of thousands of people fleeing violence in South-West and North-West Cameroon has resulted in no systematic mediation efforts, no large relief programme, little media interest and too little pressure on the parties to stop attacking civilians.”

“The collective silence surrounding the atrocities is as shocking as the untold stories are heart-breaking,” he added.

What started as protests against the growing dominance of the French language in anglophone regions in 2016 has turned into a conflict between the government and English-speaking separatists who demand a new independent state of “Ambazonia.”

Cameroonian forces have since allegedly cracked down on separatists and local communities, killing scores of civilians, burning homes, and using torture and incommunicado detention with near total impunity.

For instance on Apr. 30, soldiers killed a 16-year-old boy in the Northwest village of Kikaikelaki. According to witnesses, security forces entered the village and started to shoot indiscriminately.

One man also told HRW that authorities burned down and looted 11 homes in the village, stating: “When the military came, I hid for safety. I watched them steal gallons of fuel from a store and set my entire compound on fire. All I had is gone.”

A few days earlier, soldiers raided a health center in the in the Northwest region of Wum in search for wounded separatists and beat some of the medical staff, forcing the clinic to temporarily close.

“As they didn’t find any boys [separatists] they started beating us. I was hit so bad that I could not eat or swallow,” said one nurse.

The armed separatists have also been complicit in the crisis with reports of assaults on soldiers and kidnapping of people, including students and teachers.

In the past three years, at least 70 schools have been destroyed and over 80 percent of schools remain closed, leaving more than 600,000 children out of school in the country’s English-speaking regions.

As Cameroon becomes one of the fastest-growing displacement and humanitarian crisis in Africa, the UN humanitarian chief Mark Lowcock noted that the level of the crisis is “more alarming than ever.”

“Both the humanitarian and the security situation continue to deteriorate and run the risk of spiralling out of control,” Lowcock told the Security Council.

According to the Under-Secretary-General, the number of people in need of humanitarian assistance has increased 30 percent since 2018 to 4.3 million people today. This means one in six Cameroonians need aid, more than half of whom are children.

In the anglophone Northwest and Southwest regions alone, there are more than 1.3 million people that need aid, eight times as many as the year before.

At the same time, Cameroon’s East and North regions are hosting refugees who fled violence from the neighbouring countries of Nigeria and Central African Republic.

Among the biggest challenges is the lack of funding, Lowcock noted.

In 2018, Cameroon’s humanitarian response plan was just 44 percent funded. This year, only 13 percent of its appeal is funded.

Lowcock highlighted the need to increase awareness of the humanitarian situation, improve financing, and address the underlying causes of the crisis.

Egeland echoed the humanitarian chief’s sentiments, stating: “A group of displaced and disillusioned women I met told me that they felt abandoned by the international community, as well as by the conflict parties. They asked me, where is international solidarity? Where are the African organisations, the donor nations? Where is Europe? This conflict has roots in generations of interference from European powers.”

“The absence of a humanitarian response commensurate to the hundreds of thousands of people in great and unmet need is striking. We are too few humanitarian actors on the ground, and we are gravely underfunded,” he added, noting that the UN country team should be given the necessary financial and human resources.

HRW urged the Security Council to make Cameroon a formal item on its agenda and to press an investigation in order to prosecute those responsible.

Mudge also pointed to the need for the country to allow access and cooperate with international human rights organisations. In April, the Cameroon government denied a HRW researcher entry into the country after documenting a deadly attack by security forces in the Northwest region.

“Cameroon’s move to block a human rights researcher and observers shows its determination to conceal its brutality…the UN Security Council should encourage the country to allow access to international human rights organisations and cooperate with them,” Mudge said.

UN Human Rights Commissioner Michelle Bachelet, who recently visited Cameroon, also raised the issue of the lack of access for international and national humanitarian actors and highlighted the need to act before the situation spirals “completely out of control.”

“I believe there is a clear – if possibly short – window of opportunity to arrest the crises that have led to hundreds of thousands of internally displaced people, as well as the killings and brutal human rights violations and abuses that have affected the northern and western areas of the country,” Bachelet said.

“It will take significant actions on the part of the Government, and substantial and sustained support from the international community – including us in the UN….the stakes are high, not just for Cameroon itself, but for the whole region,” she added.