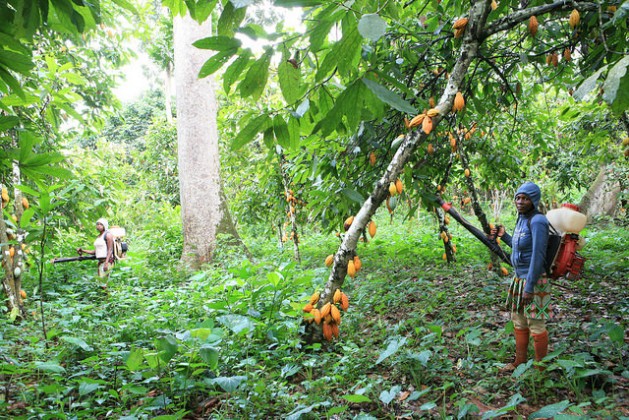 Six million Cameroonians depend on the cocoa sector for a living. Credit: Mbom Sixtus/IPS

KONYE, Cameroon, Aug 28 2016 (IPS) - Tanchenow Daniel fears he will lose more than half a tonne of his cocoa yield during the next harvest at the end of this month.

He usually harvests no less than 1.5 tonnes of cocoa beans during the mid-crop season, but he says every farmer in the Manyu Division of Cameroon’s South West Region is witnessing a catastrophe this year because of a prolonged dry season.

“The effects of droughts were worse this year because people had been ignorantly cutting down trees which provided shade to cocoa. Many trees have been dried up this year while bush fires dealt us a heavy blow,” Tanchenow told IPS, adding that though he is a victim, others have it even worse, including a friend who lost an entire farm of five hectares.

Adding insult to injury, prices fell in August, ranging from 1,000 CFA francs (1.72 dollars) per kg of cocoa to 1,200 CFA francs – down from prices as high as 1,700 CFA in July – with producers saying buying was delayed because of the drought.

Chief Orock Mbi of Meme division in Cameroon’s South West region tells IPS that he and other cocoa growers in the division also witnessed “a drastic drop” in cocoa yields in the past few months. He hopes for new methods to protect this key crop from the effects of climate change.

The South West Region of Cameroon is among the major cocoa-producing regions of Cameroon, along with the Center, East and South regions.

Data from the National Cocoa and Coffee Board suggests the drop in cocoa production was nationwide. The data indicates 7,610 tonnes of cocoa were exported in March. In April, the country exported 5,780 tonnes and the figure further dropped to 3,205 tonnes by the end of June.

Cameroon is the world’s fifth-largest producer of cocoa. It has exported 239.7 million kgs this year of which 97 percent was grade II, according to statistics published on Aug. 3 by the Cocoa and Coffee Board.

The country’s minister of trade believes for this position to be maintained, farmers burdened by the undesirable effects of climate change must join cooperative unions. It is through these cooperative societies that government distributes farm inputs such as pesticides and improved variety seeds to smallholder farmers.

He told the farmers in Cameroon’s third-largest cocoa producing locality that cooperative unions would help to constantly improve on the quality of their cocoa and protect them from deceitful cross-border buyers from neighbouring countries that pay them less than the worth of their produce.

Clementine Ananga Messina, Deputy Minister in charge of Rural Development in the Ministry of Agriculture and Rural Development, says cooperatives would help farmers make the best of aid offered in their localities, boost their bargaining power and improve gains for the six million Cameroonians who depend on the cocoa sector for a living.

Besides distribution, cooperatives sensitise farmers on the use of new varieties and techniques.

Zachy Asek Ojong, manager of the Konye Area Farmers Cooperative, tells IPS they have provided immense support to local members. “Farmers can attest to the assistance they have had from the cooperative society,” says Ojong.

Esapa, president of South West Farmers’ Cooperative, says “cocoa farmers have never really witnessed the effects of climate change until this year. So now we are beginning to work with common initiative groups in sensitising farmers, especially cocoa and coffee growers.”

He tells IPS the cooperative is now, among other things, advising farmers who had cut down trees to replant them in order to shade their cocoa and coffee farms. “The sunshine this year was so wild that people who set fires on their farms ended up burning many other farms around them. We are reinforcing campaigns against bush fires,” he said.

Tanchenow says he has planted 4,000 cocoa trees of a new variety commonly called “Barombi,” a name coined from an organisation that introduced the variety in the division. He says that two years in, yields are better and “Barombi is the hope for our cocoa’s future.”

However, he does not trust cooperative societies and calls them unreliable and tainted by favoritism.

“People in my area who depended on them for pesticides were shocked to find out selected individuals were called up by a different organisation to receive farm inputs from the agriculture ministry,” Tanchenow complained.

Farmers fall ever deeper in debt

The National Cocoa and Coffee Board says Cameroon’s cocoa was exported to eight countries, including the Netherlands, Belgium, Germany, Italy and Spain –  with the Netherlands alone importing 76.30 percent.

Still, farmers in Konye live without roads and electricity and depend on solar energy and firewood for drying and processing their cocoa. Some of them prefer to hang onto old ways of financing and sales despite the advantages of adhering to cooperatives.

Edward Ekoko Bokoba tells IPS that many farmers still prefer “pledging” their farms as means of financing, while others operate outside the major buyers of cocoa.

“Climate change is impacting pledging negatively, but some farmers seem to trust the system more than the micro-loans from the cooperatives,” he says.

“Pledging” is a system where farmers sign agreements with individuals who pay for farm inputs or lend them money. At the end of the harvest and sales, the funder’s money is reimbursed with an agreed quantity of cocoa or cash in interest.

Bokoba, who currently is expecting profits from a “pledge,” says when the dry season is prolonged or when the weather is distorted, as was the case this year, farmers are forced to borrow more money and may end up handing over all their harvest to creditors.  Some creditors are cocoa merchants who claim exclusive rights to purchase all their debtor’s cocoa and by so doing, dictate the price.

Another farmer, Ako Kingsley Tanyi, says though government is condemning sales of cocoa to trans-border buyers, some farmers prefer to sell their cocoa to Nigerian buyers who pay better prices. “Cocoa sold to Nigerians does not go through the Douala seaport and government does not have the figures,” he explains.

The performance of Cameroon’s cocoa has been as unstable as weather conditions in recent years. And the International Center for Tropical Agriculture (CIAT) forecasted in 2011 that climate change will lead to a global slump in cocoa production by the year 2030.

Many hope that relief might be forthcoming from the United Nations Green Climate Fund, which is supposed to raise 100 billion dollars per year by 2020 to assist developing countries in climate change adaptation and mitigation once their country-based COP21 plans have been fine-tuned.

CIAT, whose mission is to reduce hunger and poverty, and improve human nutrition in the tropics, says the coffee and cocoa sectors could be the first to benefit from this fund.

In the same optimistic regard, Cameroon’s trade minister holds that government’s target to export 600,000 tonnes by 2020 would be met.