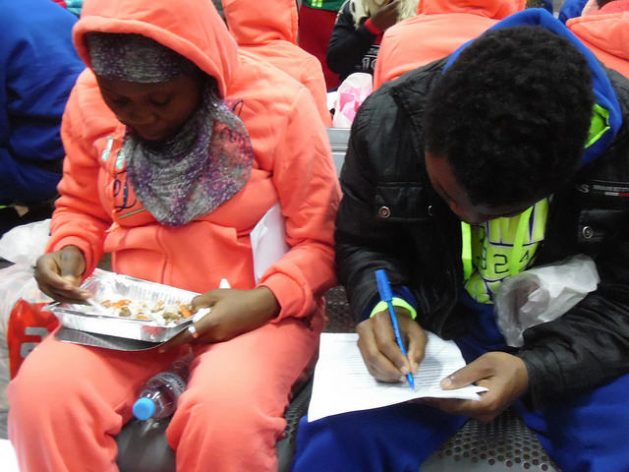 Returned migrants have something to eat and fill out papers for IOM at Yaounde Nsimalen Airport in Cameroon. Credit: Mbom Sixtus/IPS

YAOUNDE, Cameroon, Jun 7 2018 (IPS) - “Sometimes when I’m alone, I still get flashes of the grisly images I saw in the desert. I feared I was going to die out there. The people transporting us were ready to get rid of any of us where necessary,” Njoya Danialo recalled as he narrated the ordeal he endured traveling through the Sahara in search of greener pastures.

He told IPS that when the desert winds get too wild, the smugglers take refuge inside and under their vehicles, while passengers perched on luggage in overloaded pickup trucks are left at the mercy of the deadly, dust-filled wind.

Njoya is one of over 1,300 returnees that IOM, the UN Migration Agency, has repatriated to Cameroon since it started its operation in sub-Saharan Africa in June 2017. Boubacar Seybou, IOM Chief of Mission in Cameroon, told IPS the European Union has set aside 3 million Euros for its migrant reintegration operation in this country.

The operation is carried out in collaboration with officials of the EU Delegation in Cameroon, Cameroon’s ministry of external relations, the ministry of public health, ministry of social affairs and ministry of youth and civic education.

The program was planned to run for three years, facilitating the socioeconomic reintegration of 850 returnees at a cost of 3 million euros. Now Seybou said the program needs to be reviewed as more than 1,000 returnees were registered barely six months after the operation began. 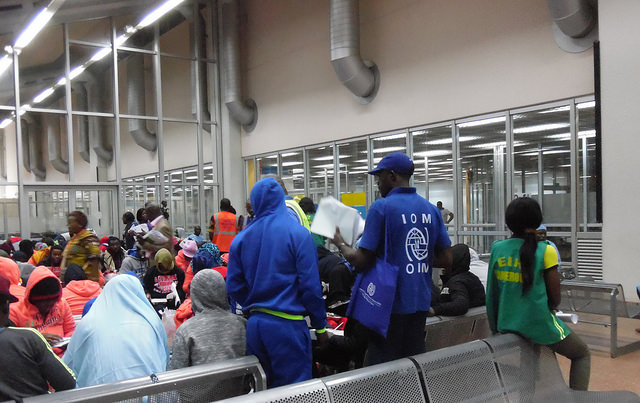 Njoya graduated from the Francoise Xavier Vogt football school in Yaounde but never played in a professional club. He claims one is obliged to know someone or pay a bribe to be recruited into a good football club. “That is why I decided to try my luck abroad, especially as a strange illness had attacked my father, causing our family business to crumble. I had to make it on my own,” he said.

Like many of the one million sub-Saharan Africans who have migrated to Europe since 2010, he had a map and a plan. He had high hopes as he navigated his way from Cameroon through Chad, Niger and Benin, until the night he curled up on a street corner in Algeria to sleep. Only then did he realise illegal migrants were not welcome. Like many others, he was forced to leave the country.

“The police arrested many of us and dropped us off at the border in the desert. Many people who walked with us died as I walked on.”

“Along the trajectory from Niger to Morocco are agents called ‘passeurs’. They offer three possibilities. They can help you get to the Mediterranean where you cross into Spain. They can take you to a detention facility and call your parents for ransom. Or [they will] rob you and abandon you in the forest,” Njoya told IPS.

He was fortunate to get passeurs who helped him travel. He met another migrant from Burkina Faso whowas Spain-bound before being forced to make a U-turn in Algeria. They both struggled to make it to Niamey where the IOM help them return to their various home countries.

But Ramanou Abdou, who was also heading to Spain from Cameroon, told IPS he was not as lucky. The agents, always heavily armed and noted for raping women, drove them into a Savanah forest, robbed them and zoomed off. They all had to struggle to find their way to Niamey where they could get help from IOM, he said.

Like Njoya and others who returned to Cameroon with the help of IOM, Ramanou was offered a package that would facilitate his reintegration. He chose to return to school. He currently studies geography in the University of Dschang.

“I am grateful for the help they offered. I wish they could continue until I obtain my bachelors degree. I also wish they could help me get medical care for the protracted skin disease and stomach problems I returned with. I am still suffering,” he said.

Besides illnesses, Ramanou says many people have a negative impression of those who return from abroad. “Most of my classmates think I am thief. Some think that all returnees are hoodlums or something. Few of them treat me well.”

Like Ramanou, Njoya equally thinks the assistance provided returnees should be stepped up. He was given about 800 euros to start a business which crumbled within a couple of months. He now loads vehicles at a motor park for a living.

“I am saving money to travel abroad through the right track. My dream is still alive and I will make it the right way. I pity those who have left again to follow the same road to perdition in the name of traveling to Europe by land,” he said.

Besides Njoya and Ramanou, another returnee used his seed capital from IOM to start a small business is Ekani Awono. He opened up a coffee shop, but now tells IPS the money was too little to keep his business alive.

The beneficiaries who spoke to IPS say their peers who left the IOM office in Niamey and returned to the Ivory Coast claim to have been given as much as 3,000 euros to start sustainable businesses.

“But in Cameroon, we are constrained to submit business plans for funding limited to FCFA 500,000,” said one of them who preferred not to be named.

But Boubacar Seybou of OIM says the business plans are approved by a steering committee consisting of the funder and government ministries. He told IPS that IOM makes sure reintegration packages are sustainable. He also pointed out that there are many returnees whose businesses are doing well.

Apart from financial aid, IOM and the government provide medical check-ups and psychosocial assistance to returnees when they arrive home, according to Edimo Mbappe of the ministry of social affairs.

“Some women who were raped in the forest, deserts and camps and get here pregnant. Alongside traumatised boys and girls, they are given psychosocial support before we let them move into the community,” she told IPS.

IOM and the government has organised a series of activities, including radio and TV shows, photo exhibitions and musical concerts to dissuade would-be migrants from attempting to travel abroad illegally. They are equally trying to educate the public to absorb returnees and reject the stereotypes that make them feel uncomfortable.