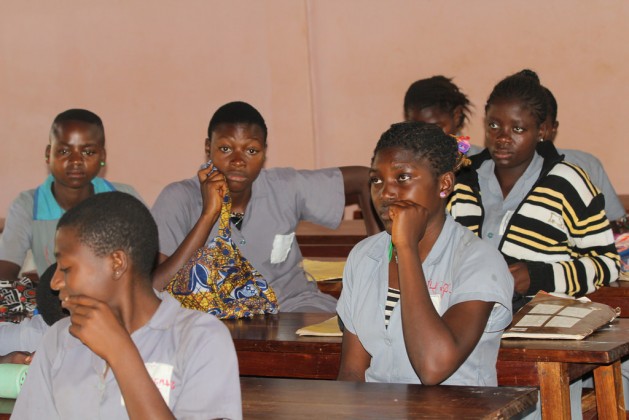 YAOUNDE, Jul 15 2015 (IPS) - Her lips are quavering her hands trembling. Susan (not her real name) struggles to suppress stubborn tears, but the outburst comes, spontaneously, and the tears stream down her cheeks as she sobs profusely.

The story of this 28-year-old’s servitude in Kuwait is mind-boggling. Between her sobs, she tells IPS how she left Cameroon two years ago in search of a job in Kuwait.

“I saw job opportunities advertised on billboards in town. The posters announced jobs such as nurses and housemaids in Kuwait. As a nurse and without a job in Cameroon, I decided to take the chance.”

"We were herded off to a small room. There were many other girls there: Ghanaians, Nigerians and Tunisians … [then] bidders came and we were sold off like property" – Susan, a young Cameroonian women who escaped from slavery in Kuwait

With the help of an agent whose contact details she found on the billboard, Susan found herself on a plane, bound for Kuwait.

She was excited at the prospect of earning up to 250,000 CFA francs (420 dollars) a month. That is what the agent had told her, and it was a mouth-watering sum compared with the roughly 75 dollars she would have been earning in Cameroon, if she had a job.

“We work in liaison with companies in the Middle East, so that when these ladies go, they don’t start looking for jobs,” Ernest Kongnyuy, an agent in Yaounde told IPS.

But the story changed dramatically when Susan, along with 46 other Cameroonian girls, arrived in Kuwait on Nov. 8, 2013.

“We were herded off to a small room. There were many other girls there: Ghanaians, Nigerians and Tunisians,” then “bidders came and we were sold off like property.”

Susan was taken away by an Egyptian man. “I think I got a taste of hell in his house,” she says, tears streaming down her cheeks.

She would begin work at five in the morning and go to bed after midnight, very often sleeping without having eaten.

Very frequently, she tells IPS, the man tried to rape her but when she threatened to report the case to the police, she met with a wry response from her tormentor. “He told me he would pay the police to rape me and then kill me, and the case wouldn’t go anywhere.”

Cut off from all communication with the outside world, Susan says that she found solace only in God. “I prayed … I cried out to God for help,” she recalls.

Susan’s is not an isolated case. Brenda, another Cameroonian lucky enough to escape, has a similar story. She had to wash the pets of her master, which included cats and snakes.

“I was sharing the same toilet with cats … I called them my brothers, because they were the only “persons” with whom I conversed.”

Pushed to the limits, both girls told their employers that they were not ready to work any longer. Brenda says that when she insisted, she was thrown out of the house.

“At that time I was frail, I was actually dying and I didn’t know where to go.” After trekking for two days, she found the Central African Republic’s embassy and slept for two days in front of it before she was rescued.

Susan was locked in the boot of a car and taken to the agent who had brought her from the airport.

“Events moved so fast and I found myself spending one week in immigration prison and an additional three days in deportation prison,” she says.

When both girls were finally put on a flight bound for Cameroon, all their property had been seized, except for their passports and the clothes they were wearing.

The scale of the problem is troubling. According to the 2013 Walk Free Global Index of Slavery, about three-quarters of a million people are enslaved in the Middle East and North Africa.

“Upon entering the country, they find themselves deceived and enslaved – within the bounds of a legal sponsorship system.”

Susan and Brenda are now back home, but they are suffering from the trauma of their horrible experience in Kuwait.

The Trauma Centre for Victims of Human Trafficking in Cameroon has been working to bring relief to the women. “We try to make them feel at home,” says Beatrice Titanji, National Vice-President of the Centre.

“They have been exposed to bad treatment. They have been called animals. They have been told they stink, and when they enter the car or a room, a spray is used to take away the supposed odour … I just can’t fathom seeing my child treated like that,” she told IPS.

She called on the government to investigate and prosecute the agents, create jobs and mount guard at airports to discourage Cameroonians from going to look for jobs in the Middle East.