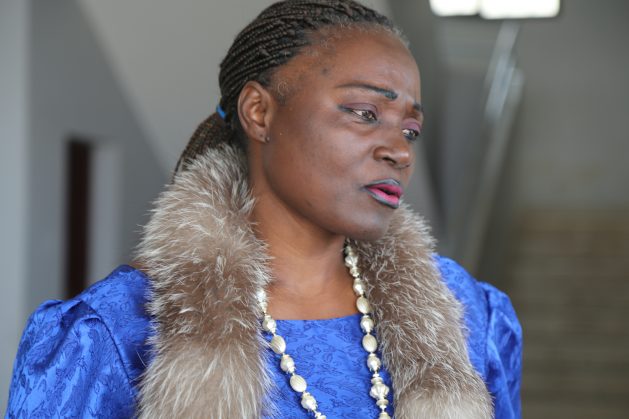 Armand Loughy is a migrant from Cameroon. Her own experiences pushed her to campaign on migration issues, shifting from being a refugee herself to becoming an activist. Credit: El Mahdi Hannane/IPS

MARRAKECH, Morocco, Dec 11 2018 (IPS) - Seven years ago, when Cameroon began experiencing inter-regional conflict, Armand Loughy, a 55-year old Cameroonian psychiatrist, strapped her youngest child on her back and with her five other children embarked on the dangerous Journey from Cameroon towards Rabat, Morocco’s capital.
They fled the deteriorating security situation in Cameroon, looking for a better life.
Loughy, who is now also a migrant activist based in Morocco, listened attentively to the on-going discussions during the opening ceremony of the Global Compact for Safe, Orderly and Regular Migration (GCM) in Marrakech.

Her own experiences pushed her to campaign on migration issues, shifting from being a refugee herself to becoming an activist—one of the most vocal personalities in the Moroccan civil society space.

“We went through the desert and where the fear consumed us. Many of my fellow migrants got hurt by bandits and died—in the most horrible way with their bodies dumped in the desert,” Loughy recalls.

After arriving in Morocco, she faced many difficulties in finding a job before finally securing work at a psychiatric clinic in Rabat.
With a well-paying job, Loughy could easily have forgotten her traumatic journey and suffering and moved on. But she chose not to—her decision to start helping migrants came at the right time as Morocco was also establishing favourable policies on how to handle migrants.

This policy shift, according to Loughy, enabled her to become “a candle that would light up the darkness of migrants.”

In 2014, she founded the Association of Women Migrants in Morocco, working to attract other migrants. Gradually, her association gained respect in the civil society space.

“In the beginning, the children of the poor neighbourhood where I was active threw stones at me,” Loughy says. “But after many months of continuous work, I became familiar and respected by locals and migrants.”

Her organisation is active in the Sidi Musa district of Salé—about 330 km north of Marrakech—where hundreds of migrants occupy small rooms, either working or begging on the streets, and then returning to the ghetto in the evening.

The children of these migrants, some of whom were born in Morocco, until recently had nothing to do. Some accompanied mothers to beg, others played in the neighbourhood all day without any clear future—a painful reality that Loughy and her organisation acted upon.

She presented a proposal to Salé’s Regional Directorate of Education and Training, and her ideas were welcomed. Classrooms were allocated within the public educational institutions for migrants’ children.

These have now become independent departments with their own teaching staff, and now even teach local Moroccan students.

“We are trying to use education as a tool for integration,” Loughy says, adding the association is making a big drive to inform migrants about the importance of education to ensure as many children as possible are enrolled into school.

Many migrants, especially those who do not have residence documents, remain sceptical of these types of initiatives, Loughy says. But the hope is that better educated children of migrants can inspire change at home and between communities.

Loughy dreams of a united African continent and believes that the best way to achieve coexistence among the continent’s peoples is through education and knowledge. After listening to discussions at the GCM about the tools and partnerships needed to give that dream a chance, she will leave Marrakech to return to spreading education among the children of Morocco’s migrants

“We have learnt that when students start living together, then parents can also learn how to coexist,” Loughy says.