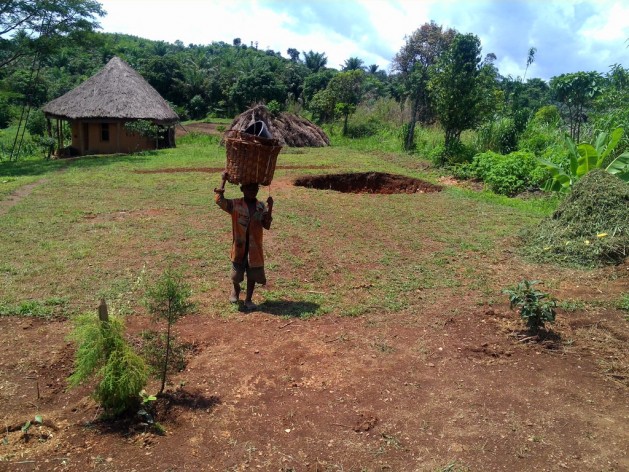 Scene from Ndanifor Permaculture Eco-village in Bafut in Cameroon’s Northwest Region, the country’s first and only eco-village which is based on the principle that the answer to food insecurity lies in sustainable and organic methods of farming. Credit: Mbom Sixtus/IPS

YAOUNDE, Aug 2 2015 (IPS) - Marking a shift away from the growing trend of abandoning sustainable life styles and drifting from traditional customs and routines, Joshua Konkankoh is a Cameroonian farmer with a vision – that the answer to food insecurity lies in sustainable and organic methods of farming.

Konkankoh, who left a job with the government to pursue that vision, founded Better World Cameroon, which works to develop local sustainable agricultural strategies that utilise indigenous knowledge systems for mitigating food crises and extreme poverty, and is now running Cameroon’s first and only eco-village – the Ndanifor Permaculture Eco-village in Bafut in Cameroon’s Northwest Region.

“Biodiversity was protected by traditional beliefs. Felling of some trees and killing of certain animal species in certain forests were prohibited. They were protected by gods and ancestors. We want to protect such heritage” – Joshua Konkankoh
Talking with IPS, Konkankoh explained how the eco-village organically fertilises soil through the planting and pruning of nitrogen-fixing trees planted on farms where mixed cropping is practised. When the trees mature, the middles are cut out and the leaves used as compost. The trees are then left to regenerate and the same procedure is repeated the following season.

“Here we train youths and farmers on permanent agriculture or permaculture,” he said. “I call it ‘permaculture the African way’ because the concept was coined by scientists and we are adapting it to our old ways of farming and protecting the environment.”

While government is keeping its distance from the project, Konkankoh said that local councils and traditional rulers are encouraging people to embrace the initiative, which is said to be ecologically, socially, economically and spiritually friendly.

“I was active during the U.N. Decade of Education for Sustainable Development. In studying the reason why many countries failed to meet the Millennium Development Goals (MDGs), we realised that there were some gaps but we also found out that permaculture was a solution to sustainability, especially in Africa. So I felt we could contextualize the concept – think globally and act locally.”

The permaculture used at the eco-village makes maximum use of limited agricultural land, and villagers are taught how to plant more than one crop on the same piece of land, use a common organic fertiliser and obtain high yields.

Farmers, said Konkankoh, are encouraged to trade and not seek aid, to benefit from their investment and prevent middlemen and multinationals from scooping up a large share of their earnings. The organic agriculture practised and taught in the eco-village is a blend of culture and fair trade initiatives. 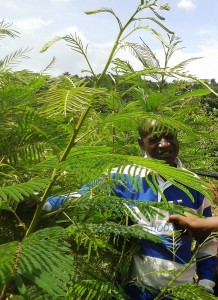 “We encourage rural farmers to guarantee food sovereignty by producing what they also consume directly and not cash crops like cocoa and coffee.”

Farmers are trained in the importance of manure, of producing it and selling it to other farmers, as well in innovative techniques of erosion control, water management, windbreaks, inter-cropping and food foresting.

Konkankoh also told IPS that it was a mistake to have left the spiritual principle out of the MDG programme. “Biodiversity was protected by traditional beliefs.  Felling of some trees and killing of certain animal species in certain forests were prohibited. They were protected by gods and ancestors. We want to protect such heritage.”

The eco-village has started a project to replant spiritual forests with 4,000 medicinal and fruit trees in a bid to reduce CO2 emissions.

Fon Abumbi II, traditional ruler of Bafut, the village which hosts the Ndanifor Permaculture Eco-village, believes that the type of cultivation of fruits, vegetables and medicinal plants used by the eco-village will improve the health of local people.

He is also convinced that with many firms around the world producing health care products with natural herbs, the demand for the products of the eco-village is high, guaranteeing a promising future for the villagers who cultivate them.

Houses in the eco-village are constructed with local materials such as earth bags and mud bricks, and grass for the roofs. Domestic appliances such as ovens and stoves are earthen and homemade.

Sonita Mbah Neh, project administrator at eco-village’s demonstration centre, said that the earthen stoves bit not only reduce the impact of climate change by minimising the use of wood for combustion but the local women who make then also earn a living by selling them.

Lanci Abel, mayor of the Bafut municipality, told IPS that his council is mobilising citizens to embrace permaculture. “You know, when an idea is new, people only embrace it when it is recommended by authorities. We are carrying out communication and sensitisation of the population to return to traditional methods of farming as taught at the eco-village.”

Abel also had something to say about the performance of genetically modified plantain seedlings planted by the Ministry of Agriculture at the start of the 2015 farming season in Cameroon’s Southwest Region, which recorded a miserable 30 percent yield.

The issue had been raised by Mbanya Bolevie, a member of parliament from the region who asked Minister of Agriculture Essimi Menye about the failure of the modern seeds during the June session of parliament.

Julbert Konango, Littoral Regional Delegate for the Chamber of Agriculture, said the failure was due the fact that seeds are often old because “there is inadequate finance for agricultural research organisations in Cameroon as well as a shortage of engineers in the sector,” a sign that the country not fully prepared for second-generation agriculture.

Commenting on the incident, Abel said that citizens using natural seeds and compost would not have faced these problems, adding that “besides the possibility of failure of chemical fertilisers, they also pollute the soil.”

The eco-village, which would like to become a model for Cameroon and West Africa, is a member of the Global Ecovillage Network.