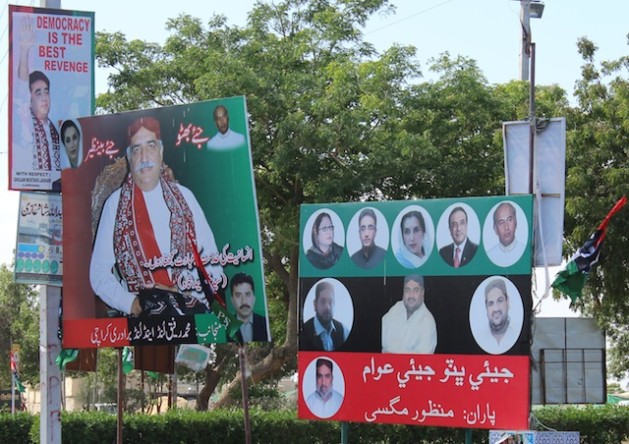 KARACHI, Pakistan, Apr 15 2013 (IPS) - Former parliamentarian Jamshed Dasti, known in his hometown of Muzaffargarh as Rescue 1122, Pakistan’s equivalent of an emergency number, is now a dubious hero. On Apr. 4, a district court served him a three-year prison sentence and a fine of 5,000 rupees (50 dollars) for presenting a fake degree to become eligible for a seat in parliament. He filed an appeal in the Lahore High Court which has overturned his conviction and acquitted him.

Many people sing his praises. “He was among the very rare breed of lawmakers who are genuinely loved by the people they serve. They didn’t care whether he possessed an academic degree or not,” Asma Shirazi, a popular television anchor, said.

Shirazi, who had visited Dasti’s constituency during the floods in 2010 and met the people who voted for him, said he never misused his position, continued living in a humble abode, had acquired no assets during his time in parliament and had never once been slapped with corruption charges.

Not everyone, however, is as forgiving as Shirazi. “Those who have cheated must be punished in some manner,” said Dr A.H. Nayyar, an Islamabad educationist.

Activist Naeem Sadiq, who was among the first to highlight the issue eight years ago and kept pressing for action on this matter, added, “More would have gone to jail had we had an active, alert and alive Election Commission of Pakistan (ECP) in the last five years.”

The May 11 parliamentary elections may see several old lawmakers who have lied about their educational qualifications stay out of politics after the ban imposed upon them by the Supreme Court.

“Enough is enough. No corrupt elements will be allowed to go to parliament. Fake degree holders have not only deceived the nation but also made a mockery of their mandate. Such elements don’t deserve any leniency,” Pakistan Chief Justice Iftikhar Muhammad Chaudhry had said on Mar. 26, while hearing the fake degrees case.

Ever since, the ECP and the Higher Education Commission (HEC) have cranked into action and blacklisted lawmaker after lawmaker.

Talking to IPS, Mudassir Rizvi of the Free and Fair Elections Network (FAFEN), a coalition of 30 non-governmental organisations which observe the general elections and mobilise voters, said that, of a total of more than 1,170 legislators, less than 5 percent have had their degrees declared as ‘bogus’ by the HEC.

According to the ECP website, 80 candidates who had forged or produced fake university degrees back in the 2008 elections will not be contesting this time.

The apex court had tasked the HEC, which funds universities and recommends the award of a charter to a university, in 2010 to vet the degrees of all the lawmakers sitting in the federal and four provincial parliaments.

Under immense pressure from the parliamentarians, the HEC dragged its feet over the scrutiny for almost three years, and degrees of 189 people remained unverified.

However, with the elections less than a month away, the inquiry has suddenly gained momentum despite the fact that the law which required the legislators to prove that they are bona fide university graduates does not apply any more.

For the first time in Pakistan’s election history candidates are being screened to ascertain whether they have criminal records, defaulted on loans, evaded tax or been involved in other financial irregularities.

In 2002, former president General Pervez Musharraf had stipulated a graduate degree or its equivalent from a seminary as requirement for lawmakers to improve the standard of parliament.

However, as Nayyar pointed out, “the addition of a degree as prequalification has been shown to be of no value and seems to have failed in the last nine years. Cheaters know how to beat the system.”

The condition was struck down in April 2008 when the next government came into power, but most present legislators had been elected under the old rules.

“We fully support the stipulated screening process,” Zohair Ashir, secretary of the parliamentary board of cricketing star Imran Khan’s party Pakistan Tehreek-i-Insaf (PTI) told IPS. “And PTI itself is undertaking stringent measures to verify each candidate’s credentials.” The party will be contesting elections for the first time.

“Every party worker’s life is an open book,” said Haider Abbas Rizvi, a prominent politician representing the Muttahida Qaumi Movement (MQM), the leading political party in Karachi, and the previous government’s ally in Sindh province. It has not had any candidate rejected for possessing a fake or forged degree.

The MQM says it screens all its candidates on its own, but screening does not take place in every political party.

After Dasti, elected in 2008, was found to have misrepresented his qualification in 2010, he was forced to resign. However, his party, the ruling Pakistan People’s Party, instead of keeping him at a distance for shaming it, renamed him its candidate for the very seat he had relinquished. He won and was made special adviser to the prime minister on livestock affairs.

“No party leader asked his members to resign despite knowing that many of them held fake degrees,” said Sadiq.

“It is pathetic that political parties have nurtured and protected crooks who have plundered and looted, bringing the country to the verge of bankruptcy,” said Dr Atta ur Rahman, former head of HEC.

The elections will be historic in that it will be for the first time in 65 years of Pakistan’s history that power will be handed over from one democratically elected civilian government to another.

There are 85.73 million registered voters in a population of 180 million, according to the Election Commission of Pakistan. Of these 37.32 million are women voters.

The Election Commission of Pakistan has appointed more than 400 monitoring teams across the country to monitor political activities.