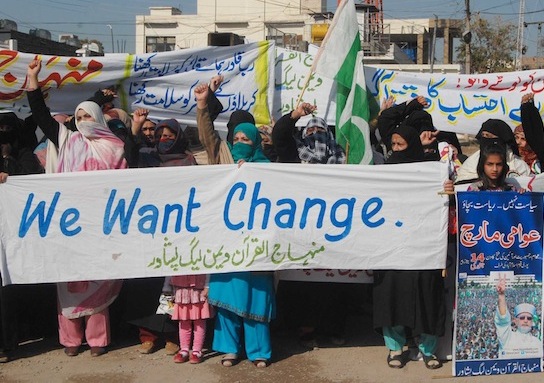 A rally in Peshawar against corruption. Credit: Ashfaq Yusufzai/IPS.

PESHAWAR, Mar 9 2013 (IPS) - A new politics of honesty – and of campaigning for honesty – is surfacing in Pakistan. Its two prominent fronts are both Pakistanis who carry also a strong foreign stamp. What many within the country find more encouraging is the strong support people are giving them.

Former cricketer turned political leader Imran Khan, who has spent much time living in Britain, has founded the Pakistan Tehreek Insaf (PTI) party which has been getting significant support, even though it is not certain the party can win enough seats in the next election.

More recently Dr Muhammad Tahir-ul-Qadri who heads the Tehrik-i-Minhajul Quran (TMQ) staged a ‘long march’ and sit-in in capital Islamabad in January that drew huge crowds. The question for Pakistan is whether these are impressive flash-in-the-pan moves, or whether the people are now pushing ahead for honesty in public life in a way that is sustainable and effective.

Qadri addressed a mammoth public meeting in Lahore Dec. 23 where he unveiled an agenda of reforms. He led his long march to Islamabad Jan. 14 and a sit-in that continued until Jan. 17.

The long march set off alarms in Pakistan’s murky political landscape. Analysts say it would ultimately benefit the Imran Khan-led PTI, which has been raising many of the issues that the 62-year-old Islamist Dr Qadri has brought into the spotlight.

“Dr Qadri’s agenda seeks electoral reforms, an end to corruption, taxation reforms, dissolution of assemblies, and the appointment of a neutral caretaker government before election,” leader of the nationalist Pakhtunkhwa Milli Awami Party Dr Said Alam Mahsud told IPS. “This resembles Imran Khan’s programme. He has been campaigning for this the past 17 years.”

Mahsud pointed out that Dr Qadri also holds Canadian nationality and cannot therefore contest election, and would ultimately not stay in Pakistan. For Imran Khan, support for Qadri’s ideas could make a difference in elections, which are expected to be called later this year.

Qadri had invited Imran Khan to join his protest, and praised him for his honesty and integrity at his meetings. Khan in turn supported Qadri’s agenda, but did not join his sit-in.

Prof. Sarwar Khan at the Abdul Wali Khan University in Mardan in the northern Khyber Pakhtunkhwa province believes the moves are well-timed because the country is beset with deepening corruption, and the weak government needs just a push.

“The TMQ chief caused a storm in teacup. But people are sick of corruption in the government, and many support the agenda introduced by Imran Khan in Pakistan’s politics,” Sarwar Khan told IPS.

“People are sick of politicians who are not only corrupt but don’t pay taxes,” said Prof Umar Farooq from the Department of Economics at Peshawar University. “For example, 70 percent of the 342 lawmakers didn’t pay taxes,” he said, citing a report of the Federal Bureau of Revenue (FBR).

National Accountability Bureau chief Fasih Bukhari has said that 7 billion rupees (70 million dollars) were being siphoned off every day. Politicians have stashed the plundered wealth in foreign countries, he said.

“I believe the next election would be fought on the single issue of corruption,” former head of the Khyber Pakhtunkhwa (KP) Chamber of Commerce and Industry Sawar Khan told IPS. Corruption, he said, had eaten into the national economy, and Pakistan is now borrowing money from the World Bank and the International Monetary Fund (IMF) at high interest rates. The cost of this borrowing, he said, then falls on people by way of price hikes.

The price of petrol, Khan said, had risen from 58 rupees per litre when the present Pakistan People’s Party government assumed power in 2008, to Rs 105 (about a dollars) a litre. Corruption and kickbacks had much to do with this, he said.

“A 50 percent increase in petroleum prices has caused the prices of essential items to rise by 100 per cent,” Khan said.

Former finance minister Muhammad Zubair told IPS that corruption had weakened the foundations of the country’s economy to an extent where people feel that now only politicians with a clean record should be given a chance to run government and to do away with corruption.

Government-owned institutions such as Water and Power Development Authority (Wapda), Pakistan International Airlines (PIA), Pakistan Railways and Pakistan Steel Mill face a huge  fiscal deficit, he said. “Successive governments have made political appointments in these institutions over the years, which has adversely affected them,” he said.

Former chairman of the Oil and Gas Regulatory Authority, Tauqeer Sadiq, is still absconding to evade arrest by the National Accountability Bureau (NAB), Zubair said. Sadiq, who was appointed by the Zardari-led government two years ago, fled to Dubai early this year when NAB unearthed corruption to the tune of 83 billion rupees (850 million dollars).

Arif Ali of the NGO Poverty Reduction told IPS that Pakistan had natural resources such as gas, oil, forests, minerals and water but people get few benefits because of the corruption.

“Contracts are given on a political basis, and honest contractors left out. This has caused huge financial losses to the country.”