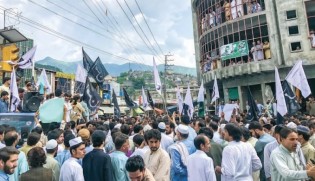 By Ashfaq Yusufzai
Voters in Pakistan’s general election outrightly rejected political parties with extremism records and candidates linked to banned terrorist groups, opting instead to back liberal forces in a support for peace.

By Ashfaq Yusufzai
Pakistan and Afghanistan, the two remaining polio-endemic countries, have joined forces to eradicate poliomyelitis by vaccinating their children in synchronised campaigns.

By Ashfaq Yusufzai
“We are extremely jubilant over the rebuilding of our school that the Taliban destroyed it in 2013, due to which we used to sit without a roof,” Mujahida Bibi, a student of 8th grade in Government Girls Middle School North Waziristan Agency, told IPS.

By Ashfaq Yusufzai
A military operation by Pakistan’s army has been proving fatal for Taliban militants who held sway over vast swathes of the Federally Administered Tribal Areas (Fata) for over a decade. They crossed over the border from Afghanistan and took refuge in Fata after their government was toppled by US-led forces towards the end of 2001. After a few years, when they got a toe-hold in the region, they extended their wings to all seven districts of Fata. Not any more.

By Ashfaq Yusufzai
“We are extremely happy over the government’s initiative to give money to the pregnant women and enable them to seek proper treatment,” said Sharif Ahmed at a basic health unit (BHU), near Peshawar, the capital of Khyber Pakhtunkhwa (KP) province.

By Ashfaq Yusufzai
For years, Robina Shah has dreamed of joining the police force. Ever since her father, a police constable, was killed in a 2013 Taliban suicide attack in Peshawar, capital of Pakistan’s northern Khyber Pakhtunkhwa province, she has longed to carry on his legacy.
Next Page »
ADVERTISEMENT ADVERTISEMENT