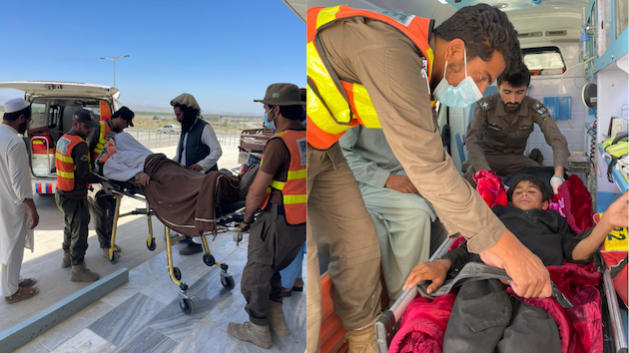 Pakistani medics treat Afghan quake survivors on the border of the two countries. More than 1000 were killed and thousands displaced after the 5.9-magnitude quake hit the Paktika and Khost on June 22, 2022. Credit: Ashfaq Yusufzai/IPS

PESHAWAR, Jun 24 2022 (IPS) - Survivors of the deadly earthquake that hit Afghanistan’s Paktika and Khost provinces told of their losses while being treated in hospitals in neighboring Pakistan after a 5.9-magnitude quake killed at least 1000 and displaced thousands more in the early hours of June 22, 2022.

The Taliban-led government has appealed for assistance, and its neighbor Pakistan was the first responder, sending aid and treating injured people.

A resident of Khost province Abdur Rahim, a daily wager, brought his nine-year-old daughter, Samia Bibi, to the North Waziristan’s hospital. She has a head injury.

Rahim told IPS that they were asleep when the earthquake started.

“My wife and two sons died on the spot, and my daughter sustained head injuries. I ran out after feeling the tremor, and within seconds the roof of our home collapsed,” he said.

A weeping Rahim said he was able to retrieve his daughter from the debris.

“Now, she is improving after getting medication. Doctors will operate upon her when she improves some more.”

Zahoor Shah, from the same province, said all his family members were still under the debris of his mud house, which fell due to the quake. He miraculously survived.

“We were all sleeping and heard the noise made by our house collapsing. I was sleeping near the door, therefore, received fewer injuries,” he said, lying in hospital with fractured legs and hands.

Shah, 45, a prayer leader, said that he was thankful for the Pakistani medics.

Pakistan sent humanitarian aid to the Afghan victims, including blankets, tents, and medicine, the Prime Minister Shehbaz Sharif’s office said in a statement.

Pakistan ambassador to the United Nations, Munir Akram, urged the international community not to link assistance for the disaster-hit nation with political concerns.

“The humanitarian assistance should not become a victim of geopolitics. UN’s humanitarian principles, including the principles of neutrality and impartiality, must be upheld,” said Akram in New York, according to media reports.

Pakistan’s Ministry of Health said about 30 of Pakistan’s tribespeople, who had gone to adjacent Khost province for business, were also among the dead.

“In line with the government’s directives, we have alerted hospitals to receive injured people from Afghanistan in North Waziristan district located on Afghanistan’s border,” he said.

Pakistan received eight injured people on June 23 from the Khost province for treatment in Khyber Pakhtunkhwa, and the number of people crossing the border for treatment rose daily.

“We have imposed an emergency in the hospitals in North Waziristan district located close to Khost province, the epicenter of the earthquake, and have called in all medical staff,” Khyber Pakhtunkhwa’s health director Dr Ikramullah Khan told IPS.

In addition, Pakistan sent a team of 61 doctors and medical supplies to the affected areas to treat the people.

“Most people required medication for diarrhea, dysentery, and gastroenteritis due to dehydration,” he said. “Ambulances are standing near the border to transport the patients to hospitals. It is an ongoing process as we would provide continuous relief to the needy people.”

“I was shifted to this hospital by rescue workers. Many say that my parents and brothers are alive, but I don’t believe because I saw their dead bodies with my own eyes,” Begum said.

She said she was to be married in a few months, but now she lay hospitalized at Khalifa Gul Nawaz Hospital, Bannu district in Khyber Pakhtunkhwa, near North Waziristan. Doctors are expected to operate on her for multiple abdominal injuries within the next few days.

“She is not fit for surgery. We are giving her antibiotics to prevent infection before her surgery,” Dr Kashmala Khan said.

She said that they had already received 30 bags of blood from local donors. Most of the injured people required blood.

“Local people are giving cash and serving food and drinks to the patients. They are donating blankets and clothes as well, “Khan said.

US Secretary of State Antony Blinken tweeted: “The earthquake in Afghanistan is a great tragedy, adding to an already dire humanitarian situation. We grieve for all the lives lost, and the hardships Afghans continue to face. The US is working with our humanitarian partners to send medical teams to help those affected.

The Taliban in Afghanistan has appealed for international support.

Taliban’s spokesman Zabihullah Mujahid told IPS from the capital Kabul that they had appealed for international assistance because providing food, shelter, and medicines to those affected by the natural disaster was challenging.

“We welcome UN agencies and international organizations’ donations and help for the people. We have already allocated one billion Afghanis (over 11m USD) (to disaster relief), but we are unable to deal with the situation,” he said.

Rasool Ahmadzai, who works with World Food Programme, said they faced hardships reaching the area because of inclement weather and rain.

“Rescue workers find it extremely difficult to remove the debris and retrieve the bodies. Still, we are re-enforcing efforts to provide food and save the people from starvation,” Ahmadzai said.

Most mud-built homes in southeastern Paktika province were destroyed, and he said it was difficult to reach the victims.

“Displaced population also require shelter, and UNHCR is working to donate the needful, but the task isn’t easy,” he said.

He elaborated that the roads were in shambles, and mobile phones were not working, hampering rescue work.

“My heart goes out to the people of Afghanistan who are already reeling from the impact of years of conflict, economic hardship, and hunger. I convey my deep condolences to the families of the victims and wish a speedy recovery to the injured,” Guterres said.

After an Afghan foreign ministry spokesman said the Taliban would welcome international help, US President Joe Biden directed USAID and other federal government entities to assess how they could respond.

Salahuddin Ayubi, a spokesman for the Afghanistan interior ministry, feared the death toll was likely to rise “as some of the villages were in remote areas in the mountains and it will take some time to collect details.”

Ayubi said that most of the houses had been reduced to rubble, and bodies swathed in blankets could be seen lying on the ground.
IPS UN Bureau Report